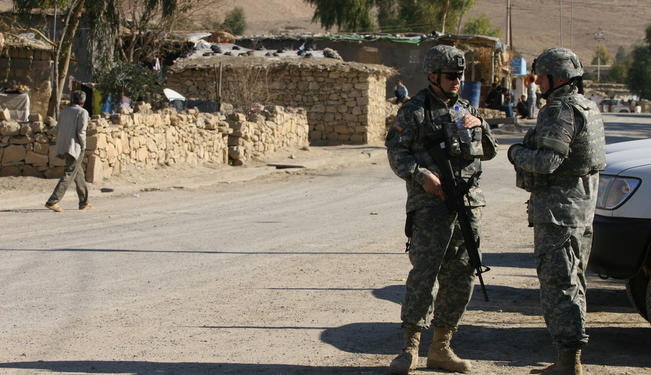 Stephen Zunes argues that the blame for the Iraq war should not be put on the Israel lobby, but the Bush administration and US imperialism. This is the first of a two part series.

Given the enormous tragedy of the US invasion of Iraq, the war’s tenth anniversary has inevitably raised the question of “why?”

As many of us predicted in the lead-up to the war, the official rationales for the US invasion of Iraq — namely, that Iraq possessed “weapons of mass destruction” and had operational ties to al-Qaeda — were false.  And the corrupt, inept, and repressive sectarian government the United States helped establish in Baghdad has undermined any pretense that the war was about democracy.

There are a number of plausible explanations, ranging from oil to strategic interests to ideological motivations. One explanation which should not be taken seriously, however, is the assertion that the government of Israel and its American supporters played a major role in leading the United States to invade Iraq.

The right-wing governments that have dominated Israel in recent years and their US supporters, deserve blame for many policies that have led to needless human suffering, increased extremism in the Islamic world, and decreased security, as well as rampant violations of international legal principles. The US invasion of Iraq, however, is not one of them.

Claims of a Major Israeli Role

There are four major arguments made by those who allege a key role by Israel and its American supporters in leading the United States to war in Iraq:

“Despite propaganda by the Bush administration and its bipartisan supporters on Capitol Hill, Iraq was not a military threat to the United States. As a result, the invasion had to have been done to protect Israel for an Iraqi attack.”

To begin with, Iraq during the final years of Saddam Hussein’s rule was no more of a threat to Israel than it was to the United States. All Iraqi missiles capable of reaching Israel had been accounted for and destroyed by UNSCOM. The International Atomic Energy Agency had determined that Iraq no longer had a nuclear program, and virtually all the country’s chemical weapons had similarly been accounted for and destroyed. All this was presumably known to the Israelis, who actively monitored UN disarmament efforts in Iraq and had the best military intelligence capabilities in the region. Indeed, as far back as the aftermath of the 1991 war, the head of the Israeli military intelligence revealed in an interview that Israel no longer considered Iraq a threat.

Though observers were less confident regarding the absence of biological weapons, the Israelis recognized that there was no realistic threat from that source either. Respected Israeli military analyst Meir Stieglitz, writing in the conservative Israeli newspaper Yedioth Ahronot, stated categorically that: “There is no such thing as a long-range Iraqi missile with an effective biological warhead. No one has found an Iraqi biological warhead. The chances of Iraq having succeeded in developing operative warheads without tests are zero.” Similarly, it is highly doubtful that Iraq would be able to attack Israel with biological weapons by other means, either. It is hard to imagine that an Iraqi aircraft carrying biological weapons could have made the 600-mile trip to Israel without being detected and shot down by US planes constantly patrolling the area. In addition, Israel — as well as Iraq’s immediate neighbors — had sophisticated anti-aircraft capability.

Yossi Alpher, a former senior adviser to Prime Minister Ehud Barak and former director of the Jaffee Center for Strategic Studies, has revealed that then-Israeli Prime Minister Ariel Sharon specifically warned Bush against occupying Iraq or invading Iraq without an exit strategy. The Israeli prime minister also feared that an insurgency could radicalize the region, spill over Iraq’s borders, and strengthen Iran. Israeli Ambassador to the United States Danny Ayalon was even instructed by Sharon to tell visiting Israelis not to encourage a US invasion of Iraq for fear that its likely failure would be blamed on Israel.

More fundamentally, if the United States was really concerned about potential Iraqi aggression toward Israel, why did the US government provide Iraq with key elements of its WMD capability during the 1980s — including the seed stock for its anthrax and many of the components for its chemical weapons program — back when Iraq clearly did have the capability to strike Israel?

“Though Iraq had no connection with al-Qaeda, it was supporting other terrorist groups that were attacking Israel. A US invasion was seen as a means to stopping the terrorist threat targeted at the Jewish state.”

Saddam Hussein did support the Abu Nidal group, a radical secular Palestinian movement, during the mid-1980s, which tended to target moderate leaders of the Palestine Liberation Organization as much as they did Israelis. Ironically, the Reagan administration dropped Iraq from its list of states sponsoring terrorism at that time in order to transfer arms and technology to Saddam Hussein’s regime, which would have otherwise been illegal. Iraq was put back on the list of state sponsors of terrorism immediately following its invasion of Kuwait in August 1990, despite evidence that Iraq’s support for international terrorism had actually declined. Abu Nidal’s organization had been largely moribund for more than a decade when Saddam Hussein finally had Abu Nidal himself killed in his Baghdad apartment in 2002.

Iraq did support a tiny pro-Iraqi Palestinian group known as the Arab Liberation Front, which was known to pass on much of these funds to families of Palestinians who died in the struggle against Israel. These recipients included families of Palestine Authority police and families of nonviolent protesters, though some recipients were families of suicide bombers. Such Iraqi support was significantly less than the support many of these same families had received from Saudi Arabia and other US-backed Arab monarchies, which — unlike Iraq — also provided direct funding for Hamas and other radical Palestinian Islamists. In any case, given that Israeli occupation forces routinely destroyed the homes of families of suicide bombers and the Iraqi money fell way short of making up for their losses, it was hardly an incentive for someone to commit an act of terrorism, which tends to be driven by the anger, hopelessness, and desperation from living under an oppressive military occupation, not from financial incentives.

“Individuals and organizations sympathetic to Israel strongly supported the invasion. Sizable numbers of otherwise dovish Jewish members of Congress voted in support of the war resolution, and the American-Israel Public Affairs Committee (AIPAC), long considered one of the most powerful lobbying groups on Capitol Hill, pushed Congress to authorize an invasion on behalf of Israel.”

While AIPAC undeniably has influenced congressional votes on Israel-Palestine, it did not play a major role lobbying members of Congress to vote in favor of the resolution authorizing a US invasion of Iraq, in large part because AIPAC’s leaders knew there was already sufficient bipartisan support for invading the oil-rich country. Far more powerful interests than AIPAC had a stake in the Persian Gulf region, including oil companies, the arms industry, and other special interests whose lobbying influence and campaign contributions far surpass those of the much-vaunted “Zionist lobby” and its allied donors.

While those who try to blame Israel for the war, such as political scientists John Mearsheimer and Steve Walt, quote a sizable a number of Israeli officials and American Zionist leaders who spoke out in support of the invasion, virtually all the citations took place after the decision had been made to invade Iraq in early 2002, apparently with the promise that Iran would become the next target. In other words, the Israeli government and the Israel Lobby were willing to use their clout to help their friends in the White House garner support from the public and Congress for a decision the Bush administration had already made on its own. Given Bush’s strong support for Israel’s acts of aggression, they were willing to return the favor. This is very different, however, from being responsible for the decision itself.

Read the final part on May 14.