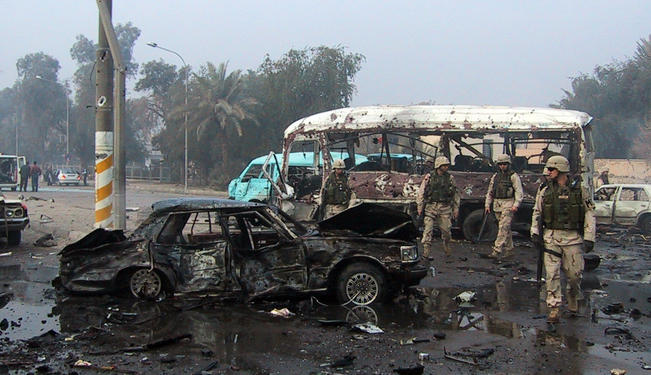 Stephen Zunes argues that the blame for the Iraq War should not be put on the Israel lobby but the Bush administration and US imperialism. This is the last of a two part series. Read part 1 here.

“Pro-Israel Jewish neoconservatives like Paul Wolfowitz, Douglas Feith, Richard Perle, and other neo-cons behind the Project for a New American Century (PNAC) were among the key architects of the policy of ‘preventative war’ and were the strongest advocates for a US invasion of Iraq.”

Most neoconservatives, Jewish or otherwise, opposed Saddam Hussein’s regime in Iraq primarily because of its challenge not to Israel but to US hegemony in the region, which was always their priority. For example, in the introduction to the influential 2000 PNAC report, Rebuilding America’s Defenses, they explicitly spelled out the neoconservative agenda: “At present the United States faces no global rival. America’s grand strategy should aim to preserve and expand this advantageous position as far into the future as possible.” The strong neoconservative support for Israel only goes as far as they see American and Israeli interests converging. They have not been major supporters of Israel, for example, when the right wing has not been in power there. And even under the Israel recent rightist governments, most Israeli government officials – with a few notable exceptions – saw Israel’s political and strategic interests at odds with the grandiose American neoconservative designs on Iraq.

Indeed, the Defense Guidance Plan of 1992, rejected by the senior Bush administration as being too extreme but adopted in large part by his son’s administration, also makes clear that the primary concern of the neoconservatives was advancing US hegemony, not supporting Israel. The role for Israel, at least under its right-wing governments, was as an important ally in that struggle for American primacy in the Middle East and beyond, but not the main focus, which they spelled out quite clearly: “In the Middle East and Southwest Asia, our overall objective is to remain the preeminent outside power in the region and preserve US and Western access to the region’s oil.” Indeed, the evolution of PNAC is based on – in the words of their initial statement of principles – “a Reaganite policy of military strength and moral clarity.” Throughout the group’s published statements, their focus is on American primacy, not Israeli primacy.

Those who try to blame Israel for the Iraq debacle cite the 1996 paper written for a right-wing Israeli think tank by two leading US neoconservatives – Douglas Feith and David Wurmser – which encouraged Israel to make a “clean break” with the Oslo Peace Process and rely more on force to advance its objectives, including the removal of Saddam Hussein, as an example of the influence of neo-conservatives motivated by support for the Zionist state. However, the paper is a call for Israel to break from the US-led peace process, then under the leadership of the more moderate Clinton administration, not a call for the United States to take risky initiatives at the behest of Israel. Similarly, the paper demonstrates how, rather than the Israelis and their supporters pressuring the United States, it was American neoconservatives pressuring Israel to change its own policies to a more hardline position.

Indeed, many of the same neoconservatives, while in the Reagan administration during the 1980s, were advocates of a US invasion of Nicaragua and Cuba as well as a nuclear first strike against the Soviet Union. In short, they are hawks across the board, not just in regard to the Middle East. Support for Israel has always been seen as part of a broader strategic design to advance perceived US interests in the region.

Furthermore, the most prominent backers of the US invasion of Iraq — Secretary of Defense Donald Rumsfeld and Vice President Dick Cheney — are neither Jewish, nor prone to putting the perceived interests of Israel ahead of that of the United States. Indeed, strong US strategic interests in the oil-rich Persian Gulf region have existed for many decades and even pre-date the establishment of modern Israel.

Has the US Invasion of Iraq Helped Israel?

To argue that the Israel Lobby was a crucial factor in prompting the US invasion and occupation of Iraq assumes that the war has been good for Israel.

Evidence strongly suggests the contrary. As cited above, in the years leading up to the March 2003 US invasion, Iraq was no longer a strategic threat to Israel, nor was it actively involved in anti-Israeli terrorism. In short, the Israelis had little to worry about Iraq during Saddam Hussein’s final years in power. They do now, however.

Key leaders of the Iraqi government are part of fundamentalist Shiite political movements heavily influenced by Iran. These movements are strongly anti-Zionist in orientation, and some have maintained close ties to other radical Arab Shiite groups, such as the Lebanese Hezbollah. One of the dominant parties of the Iraqi governing coalition has been the Islamic Supreme Council of Iraq, whose paramilitary unit, known as the Badr Brigade, was trained by the Iranian Revolutionary Guards.

The US occupation led to the unprecedented rise of Salafists and other radical Islamists in Iraq, who are often anti-Israel extremists. While fighting US occupation forces and the US-backed Iraqi regime, these insurgents became increasingly sophisticated fighters, gaining valuable new experiences in urban guerrilla warfare as well as terrorist tactics. They developed close ties with radical Jordanian and Palestinian groups with the means and motivation to harm Israeli civilians.

University of Michigan historian Juan Cole, a leading authority on internal Iraqi politics, has noted that while such radical currents were kept under control by Saddam Hussein, “An Iraq in which armed fundamentalist and nationalist militias proliferate is inevitably a security worry for Israel.” Not long after the invasion, General Shlomo Brom, former chief of the Israeli army’s strategic planning division, stated that: “The US presence there actually causes harm to some of our interests.”

As a result of the US invasion of Iraq and the bloody counter-insurgency war that followed, popular resentment in the Middle East against the United States today is arguably even greater than popular resentment against Israel. Indeed, the death, destruction, and dislocation resulting from the Iraq War have far outstripped any recent Israeli policies in the West Bank. And although Israel has committed shameless war crimes against Palestinian civilians in the Gaza Strip, US war crimes against Iraqi civilians were arguably even worse. Israel’s serious mistreatment of Palestinian prisoners does not come close in scale to America’s torture and abuse of Iraqi prisoners. Israel has openly violated the United Nations Charter and other critical standards of international law, but the US invasion of Iraq and its aftermath is of even greater negative consequence to the international legal order.

As with other powers that have tried to control the Middle East, America’s efforts to impose its hegemony have spawned incredible resistance. But with the United States itself on the other side of the globe, Israel may become an easier target for anti-American militants.

While it may not be anti-Semitic per se to exaggerate the role of Israel and its supporters in the formulation of US Middle East policy, it does indeed parallel a historic tendency to blame the Jews for the disastrous policies of Gentile leaders.

So let’s put the blame where it really belongs: on the Bush administration, its Democratic supporters (including the current vice president and secretary of state), and US imperialism — not on nefarious foreigners and their fifth columnists among our ranks. While guilty of engaging in many immoral, illegal, and dangerous policies over the years, the Israeli government and its US lobby were simply not a major factor in the decision for the United States to invade Iraq.