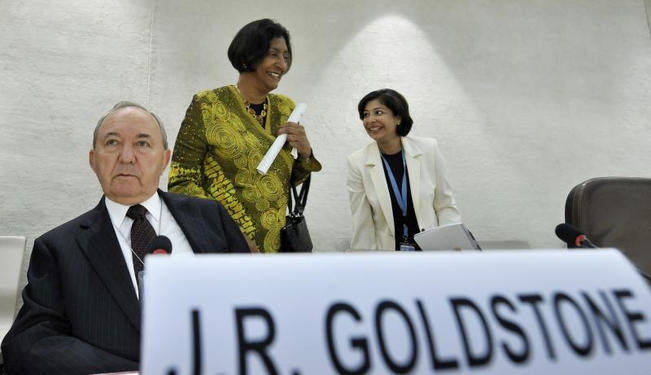 The failure of the international community to follow through on the Goldstone Report has paved the way for the current replay of the war on Gaza.

The replay of the Gaza War, a war between two unequal antagonists visiting indiscriminate killings of innocent lives and destruction of properties, could most probably have been avoided had the United Nations Human Rights Council's (UNHRC) independent Fact Finding Mission reached its ultimate conclusion through implementation. Had the Goldstone Report, named after the South African Jurist Richard Goldstone, been implemented, this would have resulted in war criminals being indicted and brought to justice before the Hague’s International Criminal Court (ICC).

Ironically, the same implicated criminals, first and foremost the Israeli Defense Minister Ehud Barak, remain in charge of the Israeli war machine that is launching the current war on the impoverished, starved and besieged Gaza Strip. The last war launched in December 2008, subject of the Goldstone Report, killed over 1,400 people, mostly innocent civilians and children, and inflicted wanton destruction on buildings and infrastructure.

The current war launched by the Israel Defense Forces (IDF) under Barak, using American made and American supplied jets, has so far seen the death of over 110 people and several hundred injured, mostly innocent civilians, as the toll continues to mount.

When the Goldstone Report was released on September 15, 2009, and it concluded that violations of International Human Rights Law and International Humanitarian Law occurred (by Israel and Hamas), Tel Aviv refused to cooperate with the report. Most disturbingly, Judge Goldstone — a highly respected international jurist who served as the first chief prosecutor of the International Criminal Tribunal for the the former Yugoslavia and for Rwanda — was harassed, chastised and unjustly attacked, along with the UN Report, by the Israelis and, most strangely, by the US Legislature. Zionist quarters, namely in the US, attacked Judge Goldstone by calling him the standard infamous name of a “self-hating Jew.” This caused the shelving and the withholding of any further action on the findings of the report.

Had the conclusive findings of the Goldstone Report found their subsequent implementations and implicated Israeli officials, in the same manner that other reports on war crimes and crimes against humanity found their subsequent conclusions, Barak would have been brought before the ICC and, with most probability, the current war on the besieged people of Gaza would have certainly been avoided.

Yet, Israel and Zionist blackmailing continued to force Judge Goldstone to retract and recant his findings in the UN report. Consequently, Judge Goldstone retracted his claim on April 1, 2011, regarding the Israeli government's policy to deliberately target citizens, by saying: “While the investigation published by the Israeli military and recognized by the U.N. committee’s report have established the validity of some incidents that we investigated in cases involving individual soldiers, they also indicate that civilians were not intentionally targeted as a matter of policy.”

On April 14, 2011, the other co-authors of the report, Hina Jilani, Christine Chinkin and Desmond Travers released a joint statement criticizing Goldstone’s retraction. All three co-authors, agreed that the report was valid and that Israel (and Hamas) had failed to investigate war crimes satisfactorily.

Israel and its appeasing Western quarters, as always the case, succeeded in burying the findings of the independent UN report. With justice aborted, alleged criminals, Barak and the Israeli Junta, remain free at large to commit a replay of the Gaza massacres, other war crimes and wars against humanity. Consequently, US-made and supplied F-16s have been used against the people of Gaza, causing the loss of many innocent lives.

Double-standards and Western appeasement compromised the course of justice with the ultimate consequence being more loss and destruction of innocent human lives.