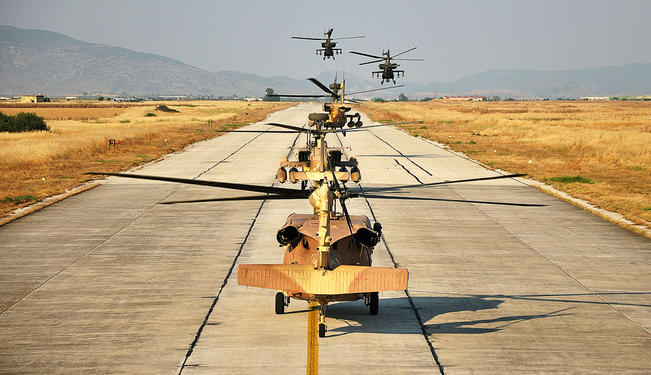 As the Israeli leadership take steps towards a ground invasion of the Gaza Strip, the prospects of long-term occupation emerge with fewer opportunities to bring the situation back under control.

It was not a surprise when Israel decided to initiate "Operation Pillar of Cloud" on November 14, 2012. Although, we may have expected this at the end of December prior to the electoral campaign in the country.Perhaps in order not to meet most analysts’ expectations, the Binyamin Netanyahu cabinet opted for an unanticipated move; being accused of waging war for two times in 4 years, even for alleged defensive purposes, could have backfired on his political campaign. However, this is only a partial and too simplistic interpretation of the facts on the ground of Gaza.

The killing of Hamas' military chief and one of the main counterparts in previous negotiations – Ahmad Jabari – was a declaration of war, loud and clearly spelled out for the Islamist movement. The assassination was also a manifest rejection of any will to compromise. It seems to be part of a broader Israeli strategic move. There could be an oncoming ground invasion, following the mobilisation of an unprecedented number of reservists (currently estimated at 70,000), to re-capture the Gaza Strip, defusing any remaining form of resistance in the already besieged enclave, and securing the Rafah border.

In fact, things have changed greatly since Operation Cast Lead in 2008-09 for Israel; not much in terms of power on the ground, but rather in what is Israel’s security consciousness, geopolitical environment and the deterrence potential. The Arab Uprisings have brought into power, less sympathetic regimes in Egypt and Tunisia, whilst also destabilising Jordan, and putting Syria out of the "games" (although the Jewish State and the Ba'athist regime have been best enemies for over 40 years).

Whether Egypt poses a strategic threat is rather doubtful, but in the Israeli perception of threat and their “policy-making under pressure”, ambiguous Islamist governments are always a cause for concern. Concern in Israeli policy parlance is often addressed through deterrence, the long-lasting paradigm of action for the country’s political and military echelons.

In this scenario, Israel is not unlikely to take drastic actions, such as re-occupying Gaza through a vast (and costly) military operation, which despite the odds, has (and is likely to maintain) wide support among Jewish Israeli citizens, as confirmed by a Haaretz poll. This is a move which will not cost too much in political terms, and indeed might even boost the incumbency factor for Netanyahu.

This interpretation of the facts is partially confirmed by a previous declaration by Ehud Barak at the end of August when he remarked that “if the cabinet deems this needed, the IDF can conquer and rule Gaza." Without any delay, Ariel Sharon’s son, Gilad declared on November 18, 2012, that “the desire to prevent harm to innocent civilians in Gaza will ultimately lead to harming the truly innocent: the residents of southern Israel. The residents of Gaza are not innocent, they elected Hamas. The Gazans aren’t hostages; they chose this freely, and must live with the consequences.”

Gilad Sharon continues with the dangerous vibe: "If the Cubans were to fire at Miami, wouldn’t Havana suffer the consequences? That’s what’s called “deterrence” – if you shoot at me, I’ll shoot at you. There is no justification for the State of Gaza being able to shoot at our towns with impunity. We need to flatten entire neighborhoods in Gaza. Flatten all of Gaza. The Americans didn’t stop with Hiroshima – the Japanese weren’t surrendering fast enough, so they hit Nagasaki, too."

While the "Pillar Cloud" is only visible now, the fire was readily prepared in the last few months. On the one hand, the timing of the operation is certainly interesting and suggests at least a level of coordination with the US counterpart. On the other, Israel might have played a waiting game in view of the US elections, for later compelling the US president to pledge an oath of renewed alliance.

US President Barack Obama unsurprisingly bowed to Israel’s "right to defend itself", in tandem with almost all Western leaders, including the UK's Foreign Secretary William Hague.

A Ground Invasion of Gaza

Yet, the death toll signifies a reality which is self-evident by virtue of numbers. Over 111 Palestinians have been killed in the IDF’s airstrikes versus 3 Israelis, at the time this article was written. The numbers will inevitably increase, exponentially, in the likely case of a ground invasion. More so with a potential re-occupation.

Verbal opposition by Arab leaders could provide little hope for the conflict to cease. Egypt's Prime Minister and the Tunisian Foreign Minister’s visits to the Gaza Strip are goodwill signs of a cosmetic change in the Arab world. But that might even propel the Israeli decision-makers to justify steeper actions, in view of a perceived hostile environment.

What can prevent a dangerous escalation, both at the local (Gaza) and regional (Middle East) levels during a time of powerful instability, is a strategy which utilises Israel’s favourite currency: deterrence.

This strategy does not imply a use of violence, whether by military means or others; in particular it does not see the use of Hamas' rockets as a viable solution, whether to confront Israel, or even less to deter it. Instead, it requires Egypt to put its weight behind Gaza, for Egypt is now "another country", providing wide regional support for the already popularised Egyptian president. The implications of this move would be far-reaching, if not positive for the stabilisation of the conflict. In effect, there seems no solution other than balancing Israel’s strategic paramountcy vis à vis the Palestinians, a position that more and more has provided unprecedented leeway for Israel to manoeuvre, with the re-emergence of a geopolitical balancing actor.

The ashes of Operation Pillar of Cloud – with its fire reverberating night and day – may leave the Palestinians with a weakened and more illegitimate leadership in the West Bank, a wrecked and martyred Islamist movement in Gaza, and a Western international community in-between, (at best silent) overtly supporting Israel at worst. European leaders should stand firm against declarations like Gilad Sharon's. He concluded his article in the Jerusalem Post by saying: “There is no middle path here – either the Gazans and their infrastructure are made to pay the price, or we reoccupy the entire Gaza Strip… This needs to end quickly – with a bang, not a whimper."

This rhetoric should make democratic leaders and their entourage uneasy, to say the least. If the path for a peaceful coexistence among Palestinians and Israelis in a one, two, or zero state solution is scuttled by recent events, then there is little hope for it to become true soon.

In this article there is little mention of Hamas' rocket attacks against southern Israel, and sporadically in the Tel Aviv area. Although the article acknowledges the dramatic psychological effects of being constantly under the threat of Hamas missiles, it also acknowledges that continuous IDF airstrikes, with a much higher capability to annihilate, in such a densely populated area as Gaza's, represents an incomparable condition for the civilian population in Palestinian territory.