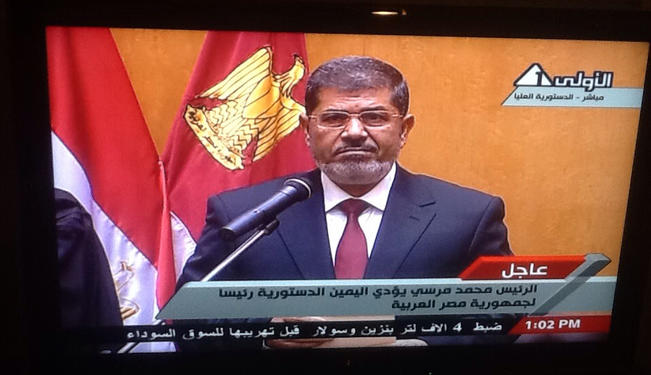 In August 2012, less than two months after the newly elected Egyptian president was inaugurated, I wrote an article dubbed, “President Morsi’s Huge Task: The Cleansing of the Old Guard”. The piece briefly highlighted the fact that Mohammed Morsi was inheriting the old system of the defunct Hosni Mubarak regime. At the end of the article, I wrote:

“Sometimes decadent and deeply infested systems are in need of surgical cleansing to launch a departure into effective reforms in lieu of cajoling and appeasements of the old system. President Morsi’s immediate challenges seem, [first and] foremost, with the old guards of the old system who never vanished, and who might still endeavor to frustrate [his] future reform plans.”

The mainly corrupt legal system of the Mubarak era has survived the eclipse of the former Egyptian regime. However, in the absence of a constitution and a freely elected legislature, the surviving judiciary renders governance by Egypt's new president a near impossible task.

The Egyptian judiciary enjoys the greatest latitude and influence over the governance of Egypt in the absence of a new, developed constitution and an elected parliament. This was amply proven by the different rulings of legal bodies to annul a freely elected Egyptian parliament and continuing dabbling over the legality of the commission currently entrusted with drafting the new constitution.

Regarding the opposition, a Hodge Podge disparate collection of political parties and political figures with conflicting agendas, that while a good number of them are sincere and truly patriotic in their orientations, others, namely the old guards of the Mubarak regime, appear intent on disrupting Morsi’s reform plans. They are continuously putting the stick in the wheel to frustrate sincere efforts by President Morsi to enact constructive reforms aiming to revive Egypt.

With his hands tied by a political judiciary infested with many appointees of the corrupt old guard, the new Egyptian president's ambitious programs for reform and the launching of Egypt into a new horizon are becoming seriously compromised. The current judiciary with the power it enjoys is intent on delaying the drafting of a new Egyptian constitution as a prelude for the election of a new legislature, one that would normalize the power structure of the nation and allow it to embark upon serious reforms.

Many voices in the opposition, while logically justifiable in the interest of a genuinely operating representative democracy ensuring the full observance of the cardinal principle of the separation of power, are opportunistic: for example, Amr Moussa, a product of the Mubarak regime who performed miserably while at the helm of the Arab League; and Dr. Mohammed El-Baradei, who failed in his moral duties of speaking out more forcefully as head of the International Atomic Energy Agency against trumped up lies by the neo-conservatives of the Bush Administration in the plans to invade Iraq. The Sawirises, putting their huge wealth amassed during the Mubarak regime to work in the service of an ideological agenda mostly aiming to frustrate the work of the current president, and the Wafd Party, are other examples that do not lend credibility by way of past records and mellow political stands.

Ideologies aside, so far, nothing in the serious reform plans and programs of President Morsi implicate the man as being partisan or indicate that he is operating out of a non-inclusive narrow agenda intending to alienate the other constituents of the Egyptian socio-political spectrum. Morsi is in a race against time as Egypt faces significant economic, social, and political challenges directly impacting upon the country.

Exceptional times often call for exceptional measures. President Morsi is virtually the only freely elected head amongst the power branches in Egypt, as both the legislature is currently non-existent, and the judiciary consists of appointees from the Mubarak era.

Dictatorship is never condoned and at the current interim stage which Egypt finds itself in, a time where the final steps to establishing the strong pillars of the separation of power and ensuring the ultimate sustainability of a truly functioning and representative democracy, initiatives towards that goal by a benign elected president can be justifiable. To overcome the inherent inertia of conflicting political interests and varying political agendas, a freely elected president in the absence of other freely elected branches of power, can find exceptional justifications for assuming other authorities in order to create representative democratic institutions. Indeed, exceptional circumstances require exceptional measures.