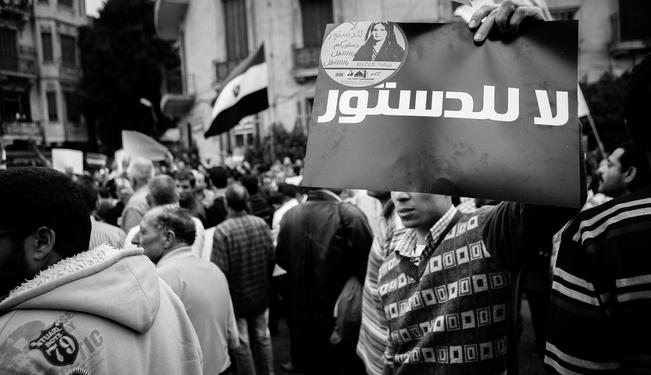 A new phase of political conflict between the Islamist-bloc and the pro-civil state bloc has been launched in Egypt. The emergence of this phase is based on the results of the battles in the street, polling stations and in political headquarters; the result will be decisive for all parties.

After the constitutional referendum battle between the adherents of the Islamist and the civil state blocs, much of what political analysts thought to be facts about the Egyptian political scene are subject to reconsideration. Some expectations were confirmed, others were deemed to be speculations.

If a phrase should be chosen for the recent political unrest in Egypt, it should be “Egypt demythologized.” The problem of identifying the weight of the different political groups in the street was one of the biggest dilemmas in drawing the Egyptian political map. The preliminary conclusions regarding these weights were drawn from obsolete resources, such as the results of the presidential elections.

Some facts disproved the applicability of this. The main one is that the followers of the election recognized the fact that a considerable portion of Egyptians, who do not belong to the Islamist-bloc, voted for President Muhammed Morsi because he was introduced as the representative of the revolution against the man of the old regime, Ahmed Shafiq. This portion of voters was later known as the “Lemon group”, a label coming from Egyptian folklore which says if you have to eat a bitter or tasteless meal; just squeeze a lemon on it and accept it. Additionally, there are too many questions about the transparency of the presidential election process for the results to be considered as a conclusive indication of the views of those who voted.

Since he was elected, the blatant failure of Morsi to fulfil the promised 100 Day programme, the unceasing economic decline and inability to defend his different political decisions — such as appealing for the World Bank loan — severely undermined the image of Islamists in the Egyptian street. Consequently, exaggerating the power of one group over the other has become very common.

This exaggeration was not only in media propaganda but also in political circles. When Morsi issued the constitutional declaration that immunized him and the constitutional committee from any judicial oversight, the swift decision of the allied civil-state political groups in the “National Rescue Bloc” (NRB) — led by Muhammed El-Baradei, Amr Moussa, and Hamdeen Sabbahi — to call for demonstrations was met with fears of breaking the liberals’ political power on the rock of reality, that is, the street.

However, in response to this call, the surprisingly large number of demonstrators that filled major squares all over Egypt, and even up to the presidential palace in Cairo, had a striking impact on the situation. Commenting live on the scene around the presidential palace, Dr. Emad Gad, the vice president of al-Ahram Centre for Strategic Studies and member of the NRB, stated on TV that after the formation of the bloc the American ambassador told El-Baradei that liberals “cannot recruit more than 10,000 in the street which makes them too tiny to impose pressure.” However, Gad also added that after the great demonstration which entrapped the presidential palace, the ambassador asked to meet El-Baradei and Sabbahi.

At the same time, Islamists felt intimidated by the power of their counterparts in the street which led the Muslim Brotherhood and Salafists to conduct a well-organized demonstration with buses bringing in supporters from all over the country, along with live coverage by state media. Yet, it failed to fill more than Cairo University's campus. Such scenes led to the later bloody clashes between demonstrators and Muslim Brotherhood supporters outside the palace. But this only showed that the strength of the mythical “Muslim Brotherhood armed militias” had been exaggerated since they failed to protect 28 burnt Brotherhood offices.

In such a situation, it is impossible to attribute victory to one group over the other while both have proven their power in different ways. This applies to the results of the recently held referendum over the new constitution. The result saw 63.8% vote in favour of the constitution while 36.2% rejected it. However, the turnout only saw 32% of all eligible voters participate. Out of Egypt's 52 million registered voters, only 10 million approved the new constitution.

Despite the documented violations in the voting process, the grave shortage of judicial supervision at polling stations, and the explicit exploitation of mosques to exhort voters to approve the referendum, Islamists could not reach their expected momentum in the street and the results proved it. Therefore, the famous Egyptian journalist Muhammed H. Haikal stated that removing the influence of the mosque and other electoral violations could yield a more balanced result.

Statistically speaking, Islamists hardly reached 50% in Alexandria, the fortress of Salafism, while 56% of Cairo voters were against the constitution. The spokesman of the Salafist movement and the constitutional committee member Yasser al-Burhami admitted that Islamists lost considerable credibility in the street.

I am inclined to believe that the bad political performance of Islamists led their electoral power to shrink. From winning by 78% in the March 2011 referendum on the constitutional amendments; then 66% in the parliament; then 51% with the aid of the “Lemon group” in the presidential elections; and up to the poorer than expected performance in the street and in the highly suspicious constitutional vote.

However, it is important to shed light on the fact that the crisis caused strong political polarization that helped political observers to draw lines dividing those who belong to each camp. Those in the grey zone between the Islamist and liberal blocs, have now chosen which side they should stand with.

The crisis has put the strength of the NRB alliance, as well as the Muslim Brotherhood-Salafist alliance, to test and proved that the new emerging political blocs will make the next battle, which is for the parliament, far from easy. Burdened by its bad parliamentary performance, the Muslim Brotherhood will fight to occupy the majority of seats to be able to control the legislative authority in the country. At the same time, the unifying and improving civil-state groups will seek the same target to stop the Islamist domination over the state powers.