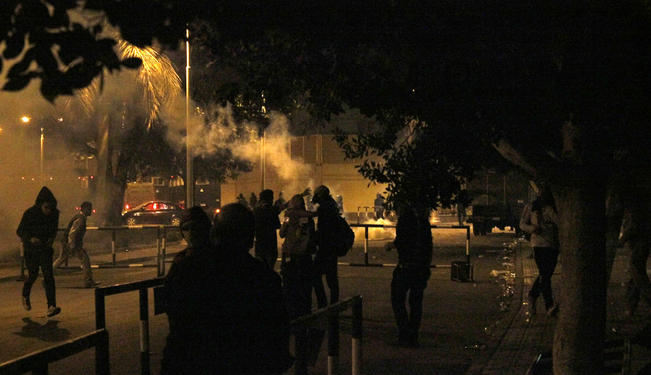 Open any international newspaper of late and you will read a misleading, watered-down version of the truth.

"Muslim Brotherhood supporters clash with protestors, Morsi’s backers and rivals battle in streets of Cairo, Egypt descends further into political turmoil – these are all spins on what is really happening here."

The truth is uglier and more unsettling. This is not about two factions battling each other. This is about a well organized and devious militant militia, with members that carry pictures of al-Qaida and Bin Laden, who recently went to disrupt a peaceful protest with guns, ammunition and gas. I saw them attacking women and men of different backgrounds who stood opposed to them, in the most violent way.

This is not about Egypt being divided. Yes, we are a diverse and populous nation and we will not all agree on everything, socially or politically. But this is about one faction that wants to bring a war against everyone who does not belong to or endorse their version of Islam. I am a Muslim woman and they label me a crusader and an infidel because I do not support their view of Islam.

We stood in peace. We came as we had come on December 4, 2012, to express our outrage at the draft constitution that President Mohammed Morsi and his supporters want to pass, and the sweeping powers he has accorded himself, but we came peacefully. Tuesday evening was marked by the huge march towards the presidential palace, which thousands joined. Crowds of us assembled, stretching as far as the eye could see. We carried lights and flags; we chanted; the atmosphere was full of hope and unity. Like the best times of the revolution, we felt a sense of possibility for the future of our country and conviction that only by challenging Morsi’s bullying, authoritarian tactics could this possibility become a reality.

What we want is for the president to acknowledge that his decree and his draft constitution do not represent the wishes of all Egyptians, instead putting all control in his hands and those of his followers. This draft constitution, hurriedly assembled in the middle of the night before receiving rushed approval by Morsi supporters, is based upon a misinterpretation of Islam. It has not been the result of consultation with all groups and severely restricts the rights and freedoms of anyone who is not an Islamist. We, the sizeable groups of Muslims and non-Muslims, Egyptian men, women and children who are not Islamists, want our voices to be heard as well. We want our constitution to represent our needs and enshrine our rights.

In asking for this, what did we get in response? The gangs of Muslim Brotherhood supporters that attacked us had guns and ammunition; they burned our tents; they beat women. They shot at us.

The US government and other Western countries should not think or spread the idea that this is an internal conflict between equal sides. There is no equality in this situation. These gangs are part of a new fascist group, who will kill people that do not agree with them or are not with them. They would rather massacre than see diversity or allow for freedom of expression.

I am a defenseless woman. I am tenacious and strong but I do not carry a weapon when I go to protest and I never will. But I will keep going because this is my life, my country, my freedom.

I am telling the US government and its allies that it will be too late to have another version of the Nuremburg Trials when we are all dead. For once, act before it’s too late. Do not forget 9/11 and how it came about. The US tolerated Bin Laden when it was in your interests, then he turned on you. Our former President Sadat released Islamists from prison and then they assassinated him because he signed a peace agreement with Israel.

This time will be no different. A Hamas presence in Sinai will not only be an arm to terrorize Egyptians; it will terrorize Israelis also. Do not be deceived. These extremist groups are very sly and I am telling you that if given the chance Hamas will stay in Sinai until it is powerful and then turn around and kill. They will kill the US soldiers that you wish to see stationed there with them. They will kill defenseless civilians. They will do whatever it takes to impose their view of world order on the populations that surround them.

Whether this is hyper political correctness or moral cowardice, it will backfire upon you as well as us. Read the history of the Muslim Brotherhood; look at their demonstrations throughout history. You need to show those of us fighting for our rights that you are on our side and that the violence being used against us is not acceptable. By giving covert support to this regime, through Clinton’s NATO speech refusing to clearly and openly condemn the repressive and violent measures being used to keep us silent, through your praise of Morsi brokering the cease fire in Gaza, you are giving power and legitimacy to this burgeoning dictatorship.

You are disempowering the majority of peaceful Egyptians at the time when we need your support the most.

To citizens around the world, help our voices be heard.