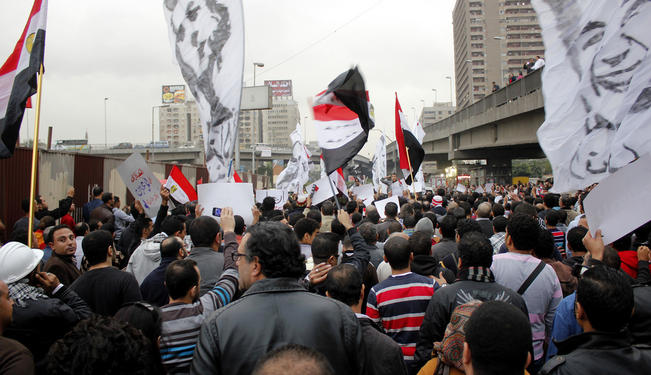 The political unrest in Egypt over President Morsi's decree has significantly polarized the country even further.

Egypt, as an abstract concept, is often associated with the ancient, and with riddles. So here is an ancient riddle to ask of Egypt: does objectivity exist? Perhaps we can make the following points without much controversy. Egypt had a revolution against a military dictatorship in January-February of 2011. This military dictatorship stacked Egypt’s judiciary, army, state security services, and professional associations with loyalists, making up what political scientists refer to as the “deep state.” The army, under the auspices of the Supreme Council of the Armed Forces (SCAF), supervised a highly imperfect but relatively bloodless transition to democratic elections, all with the tacit understanding that they would hold the real power of the country in their hand (the other one holding a gun). A series of primary, runoff, and final elections, whose process was flawed but essentially legitimate, brought to power the Muslim Brotherhood's (second choice) candidate Mohammed Morsi, who many described as the Brotherhood’s “spare tire” and the army’s lap dog. Within weeks of taking power, while Morsi was being ruthlessly attacked by the shell shocked Egyptian “opposition”, he outmaneuvered the SCAF in a manner that ended the talk of dogs resting up on laps. The Constitutional Assembly meanwhile, already once dissolved by the Supreme Constitutional Court (SCC), was widely expected to be dissolved once again, as it was fast hemorrhaging all non-Islamist members. That is when, on November 22, Morsi issued a series of rather non spare-tire like decrees that declared the Assembly immune from judicial rule. He also made himself and all of his decisions immune, while he was on the subject. But that was only temporary, he assured us. And we should trust him because he fears God.

The Law of God

Well, it is unclear why the secularist and Christian resignations from the Constitutional Assembly occurred. The explanations I have read for the resignations have not convinced me of the wisdom of these moves, which only leaves the Islamists wide open and unopposed to impose their agenda. As a rule, one does not want to resign from whatever positions of power you hold when Islamists have the presidency, have shown they can stack a parliament, and have subdued, at least cosmetically, the army. There is no such thing as a “principle” that is more important than these facts. You stay and fight, because there is no rational alternative — otherwise you are throwing the game. Were the liberal factions waiting for, say, a “secular” dictatorship to come along and jail all the Islamists in the nick of time? That’s not really supposed to happen anymore.

Which brings us to the judiciary. Almost the entire judiciary of Egypt is currently on strike, including the SCC, who refused to ascend to the bench on Sunday because of what they described as intimidating “mobs” of Muslim Brotherhood supporters who created, just so everyone is very clear, “an abhorrent scene of shame and disgrace.” However, the New York Times reports regarding the same scene, “a relatively staid crowd of a few hundred demonstrators from the Muslim Brotherhood.” Something has to explain this bizarre phenomena. One pair of eyes discerns a “mob” so bloodthirsty and intimidating that the most important judges of the land, flanked by dozens of internal security forces, were too scared to go to work; another notes a few hundred straggly bearded, “staid,” probably poor Brotherhood members holding signs hoping for the law of God to rule Egypt.

Allow me to hazard a guess as to what explains the discrepancy. A couple of years ago, I spent several months in Northern Nigeria where I was researching why twelve northern states there demanded, via a massive grassroots uprising, the reestablishment of full Islamic penal and legal codes. Bring on the harsh punishments, they chanted, bring us God’s law, and immediately. Now why would this be? To ask many of Egypt’s liberals, who remind me of Nigeria’s wide-eyed, uncomprehending moneyed classes, the answer would be something like: “fanaticism”, “fundamentalism”, “they gave them oil and bread”, “they told them so at the mosque or they would go to hell”, or other such explanations that not too subtly liken Islamist-leaning masses to livestock.

What I found instead in Nigeria, which surprised me, was that the above had little to do with anything. It turns out that Islamist leaning masses are highly rational people for the most part who — when not toiling to try to put bread in the mouths of their increasingly impoverished children — look around and correctly note that systems like “military dictatorships” and “democracy”, which are heavily advertised as diametrically opposed, actually make no real difference in their lives. In either case, they are mired in poverty and injustice that are a chief result of the garish corruption of their governors, irrespective of whatever rhetorical cloak they wear to justify their unchecked authority for that decade or two. Stealing is stealing. And so, given this panoply of failure, these regular people who are now Islamist leaning, hope the laws of God will succeed where the laws of man have failed to reign in their thieving leaders.

This is not very different from Egypt. And if you understand the deep roots of religious consciousness in Egypt — by which I mean, a sense that there is always more than meets the eye, a sense of something deeper, a sense of time beyond the small amount we are apportioned, a sense of the otherworldly that is everywhere in Egypt’s monuments and rivers, in the sight of its crescent moon against the palm dates, the same scene captured in cave paintings — you’ll understand how very resonant that consciousness is for most Egyptians. This is unscientific — but most things are.

And here is the Muslim Brotherhood, bottling up this spirit of Egypt and reselling it to its increasingly desperate masses. Yes, it’s disgraceful in the sense that all politics are dirty and dishonest to one degree or another. The real shame, though, is that Morsi and his party panicked in a disastrous way on November 22. There is simply no question that they overreached. I think about the Muslim Brotherhood’s history, starting in 1928 as a movement that was perceived almost immediately as threatening to Egypt’s then very liberal status quo; and I think about the arrest of 25,000 Muslim Brotherhood members in one night under Gamal Abdel Nasser; and the fracture of the group into violent and accommodating wings; and the fact that almost everyone has been to jail — Egypt’s jails — including Morsi; and the fact that they’ve suddenly been hoisted from warra al-shams (behind the sun), to use the widely circulated phrase for where Egypt’s political prisoners went in the late 20th century, and into the light; and I see how all of this produced a panic, a reaction of a caged animal that is still not used to life outside the wires; and I see the tragedy in it.

And in this sense, Tahrir Square’s liberal protests and the opposing Islamist demonstrations in front of Cairo University are stages in which Egypt’s fractured histories act out their worldviews and anxieties. Liberals, who in significant part do not understand that the Islamists chanting nearby down Qasr al-Aini Street — which is, interestingly, a bridge that leads toward Cairo University over the Nile — also own the revolution and are also part of Egypt and its history; and Islamists, whose oppression and isolation has produced a small-mindedness, and catastrophic paranoia and arrogance — that has transformed Egypt into a two horned dragon.

*[This article was originally published in German by Die Tagezeitung].