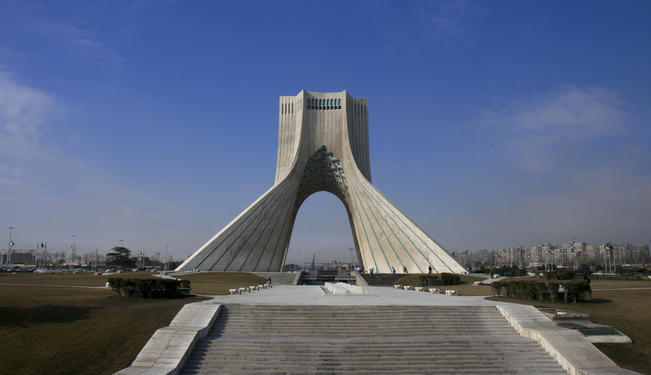 The reason: the chairmanship of the committee, this session, had passed to Iran.

"Countries that are under Chapter VII sanctions for not meeting their international obligations with regard to their nuclear program should not hold formal or ceremonial positions in UN bodies," declared US Representative Joseph M. Torsella. "Allowing Iran — a country that is in flagrant violation of its obligations under multiple UN Security Council resolutions and that expresses flagrant disregard for international terrorism, human rights, and disarmament — to chair this committee diminishes the standing and effectiveness of this institution."

The committee is one of the more obscure cogs whirring inside the formidable UN bureaucratic machine, and Washington's symbolic boycott is unlikely to result in a drastic re-direction of UN activities this year; the West still has Britain and Italy there to speak up for its concerns. But the US walkout does reflect how the policies and public face that Iran has projected to the world under the hardline leadership of Mahmoud Ahmadinejad has closed off any serious dialogue with the United States in matters small as well as large.

Perhaps this will change, and one might hope quickly, after the astonishing result in Friday's elections in Iran. Hassan Rouhani was the only candidate among the six permitted to run for president who called for changing the policies that have isolated Iran politically and economically. His first-round victory is a decisive popular repudiation of the rigid conservatism of the past eight years, embodied in the person of Saeed Jalili, the truculent nuclear negotiator who was the favored candidate of the security establishment and, it was believed, of Supreme Leader Ali Khamenei himself.

Rouhani, who pointed to the economic hardships that the hardliners' intransigence had brought on the Iranian people through international sanctions, won 18.6 million votes. Jalili, who had celebrated the "resistance economy," received a bit less than 4.2 million votes. Conservatives plainly misgauged the Iranian public's enthusiasm for a provocative nuclear program as a cornerstone of national pride. Their attacks on Rouhani's 2004 proposal for nuclear concessions — spurned by an unyielding Bush administration — if anything, enhanced his credibility with Iranians.

Fresh from such a stunning upset, Rouhani will need quickly to show Iranians some results, in particular, on the economic front. Having defended in the campaign his pragmatic flexibility on the nuclear issue a decade ago, Rouhani now needs to persuade Supreme Leader Khamenei to give him the running room to try a new approach.

President Barack Obama can facilitate a more forthcoming position by sending Rouhani his personal congratulations, which would be seen in Tehran as a signal of US readiness to reach a settlement. Khamenei is said to be obsessed with the notion that the United States is determined to overthrow the Islamic Republic, and Obama's recognition of Rouhani's election should assuage that suspicion. Rollbacks of the many layers of sanctions, of course, would be part of a negotiated package that conclusively resolves the well-founded suspicions of the international community about Iranians' nuclear intentions.

More Catholic than the Pope

Obama, too, now has a bit more political space at home for negotiating with Iran. Although Israeli Prime Minister Binyamin Netanyahu was quick to dismiss "wishful thinking" about a change in Iranian direction, Israeli newspaper Haaretz noted that Rouhani's election "has deprived Israel and its supporters of their most potent weapon against Iran's nuclear plans: Mahmoud Ahmadinejad," whose "incessant provocations against world leaders and his vile denial of the Holocaust angered world public opinion and inflamed American Jews, who viewed him as Adolf Hitler incarnate."

A wider normalization of American and European relations with Iran will depend not only on a nuclear deal, but also Iranian leaders' stepping back from the aggressive hostility toward Israel that Ahmadinejad has represented. Opposition to Israel seems wired in the Islamic Republic's DNA, but Tehran does not need to be "more Catholic than the pope," threatening to sabotage any Palestinian-Israeli peace settlement, as Ahmadinejad clearly seemed ready to do.

Assuming a signal from Rouhani that Iran will welcome a compromise settlement of Syria's civil war, it seems that this would be a useful moment for the United States to drop its opposition to Iranian participation in the planned international conference to end that conflict, and put in place a transition to a more inclusive and democratic regime in Damascus. Even before Rouhani's election, it was hard to see how a settlement could be implemented without Iranian assent. Now talking with Iran should no longer be radioactive.

Perhaps American diplomats can then even return to obscure UN panels where regular geographic rotation has installed an Iranian in the chair.