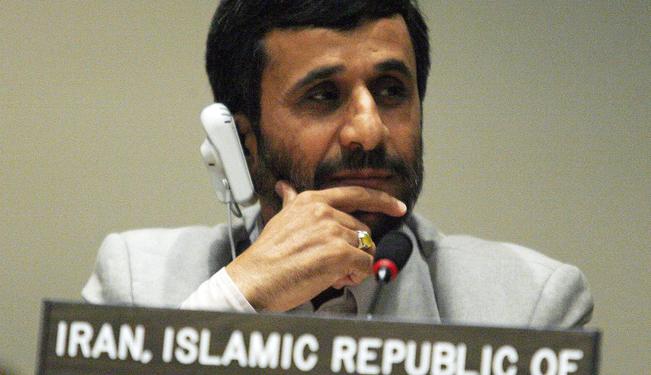 After eight years of controversial rule, President Ahmadinejad is constitutionally barred from running for office again.

On June 14, 2013, Iran's eleventh presidential election will commence. Out of the 686 candidates that registered at the Interior Ministry, the Guardian Council approved eight candidates. Prominent candidates include the country’s top negotiator for its nuclear program, Saeed Jalili; the mayor of Tehran, Mohammed Baqer Qalibaf; and the supreme leader’s advisor in international affairs, Ali Akbar Velayati.

Iran’s political system drastically changed after the overthrow of the Mohammed Reza Shah in 1979. The Islamic Republic of Iran was founded by a national referendum which was overwhelmingly passed with 98% in 1979. The new constitution that went into force in December 1979 entailed democratic and theocratic elements, installing Ayatollah Khomeini, according to his velayat-e-faqih (Guardianship of the Jurist) concept, as the supreme leader of the country; a post after Khomeini’s death taken over by Ali Khamenei. However, the system also entails democratic elements as the constitution states that the “affairs of the country must be administered on the basis of public opinion expressed by the means of elections.”

According to the constitution, the president is “after the office of Leadership…the highest official in the country.” Iran’s Presidential Electoral Law lists six requirements for candidates. Among them are “being of religious and political men,” “being faithful and a believer in the foundations of the Islamic Republic of Iran and the official religion of the country,” and “having good reputation, trustworthiness and piety.” The Guardian Council, consisting of 12 Islamic jurists and clerics, has to approve candidates in a vetting process before the election. The supreme leader appoints the six clerics and has influence on the rest of the process.

The outgoing president, Mahmoud Ahmadinejad, saw an unstable relationship with Ayatollah Khamenei. Despite fewer disputes during Ahmadinejad’s first term as the supreme leader supported the president's reelection in 2009, the relationship became increasingly tense during his second term. In 2011, the supreme leader, in what was seen by many as an unprecedented move, overruled Ahmadinejad’s decision to dismiss Intelligence Minister Heydar Moslehi. In the run-up to this year’s election, a “loose coalition of clerics and Revolutionary Guards commanders” have increasingly attacked the president and his allies for the government’s mismanagement of the economy.

Why is the Iranian Presidential Election Relevant?

In 2009, mass protests, known as the Green Movement, in support of opposition candidates Mir Hossein Mousavi and Mehdi Karroubi broke out after Ahmadinejad was announced as the winner of the election. The government’s security forces and state-sponsored militia violently suppressed the protests and arrested scores of protesters. Mousavi and Karroubi were both placed under house arrest and remain there until today. Some human rights campaigners claim that hundreds of people were killed during the crackdown on protesters, while the government states the number to be much lower.

In the run-up to this election, the Iranian regime has issued several statements that it will not tolerate a repetition of the 2009 protests. Iran’s police chief, Ahmad Moghadam, said on May 22: “Due to the preparedness of intelligence bodies and security forces, the events that took place in 2009 will not be repeated.”

Several commentators see the current situation as a test for Khamenei’s power. The Guardian Council rejected Esfandiar Rahim Mashaie as a presidential candidate, which was seen by many as part of a power struggle between President Ahmadinejad’s and the supreme leader’s camp. Mashaie is the president’s former chief of staff and one of his close allies. Ahmadinejad vowed to appeal the Guardian Council’s decision. The field of presidential  candidates is dominated by contenders with outlooks similar to the supreme leader. Jalili, who previously worked at Khamenei’s office, is currently seen by many as the frontrunner. Iran expert Ali Ansari, referring to Khamenei, stated that: “No one in Iran today becomes president without his approval.”

The international sanctions against Iran and the dire economic situation will be crucial to how the relationship between the supreme leader and the next president develops. One important question is in what ways will the new president be able to influence the negotiations over Iran’s nuclear program. Whereas Ahmadinejad can be regarded as a controversial and very vocal president, analysts say “Khamenei is intent on seeing a loyal and docile candidate” after the 2009 unrest.

Iran has many pressing issues to solve, the economy topping the agenda. It remains to be seen how much of a positive impact a new president will have.