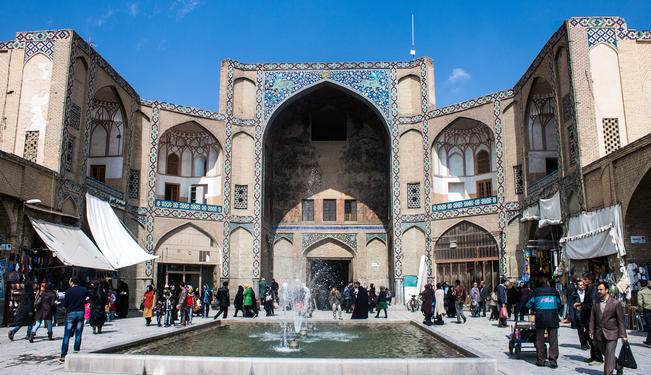 Under Rouhani, it will be a lot harder to demonize Iran. This is the last of a two part series. Read part one here.

Manuel Langendorf: Was Mahmoud Ahmadinejad’s ally, Rahim Mashaie, excluded from the election because he is an opponent of Khamenei and the conservative establishment? Was this and the exclusion of former President Hashemi Rafsanjani an indication of the all-embracing power of the religious leader, Ali Khamenei?

Shayan Arkian: I know that since 2011 the story of a power struggle between Khamenei and Ahmadinejad has been frequently talked up by western media. This depiction is extremely distorted and ignores important facts; for example that Ahmadinejad, until today, has been able to count on Khamenei’s support in his disagreements with the parliament and, up until now, Khamenei has defended him against his critics again and again. It is absolutely incomprehensible why Western experts completely ignore these facts and prefer to paint a caricatural picture of Iranian decision-makers. It may be that the frequent perception of power struggles by the West when it comes to the smallest disagreements between political actors in Iran has a racist undertone; this is based on the idea that Iranian political actors cannot amicably solve disagreements, and therefore, at the occurrence of the slightest difference of opinion go at it like Tom and Jerry, fighting each other continuously. Moreover, in other countries, these naturally occurring and conventional disagreements as in the Islamic Republic of Iran's example, would be seen as pluralism and perceived and lauded as an expression of a vital political landscape, instead of being dubbed as power struggles.

Now, with regards to the reason why Ahmadinejad’s ally, Rahim Mashaie, was excluded by the Iranian constitutional court, the Guardian Council. This exclusion is not related to the alleged antagonism between him and Khamenei. Khamenei – against the widespread view in the West – actually never criticized Mashaie, but at several times came to Mashaie’s defence. The reason for his exclusion seems to be connected to the simple fact that Mashaie never held a post as mayor, governor, minister, or a comparable post in order to fulfill the necessary administrative references and experience which the office of the president requires per constitution.

Concerning Rafsanjani, the situation is similar. Only last year Ayatollah Khamenei reappointed Rafsanjani as the chairman of the Expediency Discernment Council — an even higher council than the Guardian Council with respect to the constitutional conformity of proposed laws. Rafsanjani’s exclusion surely can be rooted in multiple reasons, but only one would be sufficient: this could be his age. The constitution prescribes that the president has to have the ability to administrate and this, naturally, includes physical and mental abilities. It was the 79-year-old himself who said months before his application: “My age is such, that I don’t have the required ability to perform the heavy responsibility of the presidency and to administrate the country’s affairs, and I believe my presidency is against religious law and detrimental to the state.”

Langendorf: Often cited in relation to the elections and the situation of women in Iran, is that women are a priori excluded from presidential elections. Should this, in connection with the duty to wear a headscarf, be seen as a sign of the oppression of women?

Arkian: As in every country, the status of women is socially conditioned. Of course, legislation can have an influence on that. But legislation in the end mirrors the moral concepts of a society – at least in countries where its leaders are regularly elected. And I include Iran in this, particularly since elections have a high rate of voter turnout. Anyway, it is not correct to say that women are excluded from the outset of the presidential elections; otherwise, women could not apply in principle.

According to the speaker of the Guardian Council, a female applicant has never been disqualified because of her gender. Thus, women are not from the outset excluded, but society needs a transformation which enables women to take on more high-ranking positions in order to gain the necessary qualifications for the presidency. The possibility of a female president is, by all means, given according to the constitution.

Langendorf: Ahmadinejad ruled Iran for eight years. Overall, how would you evaluate his tenure in office? How does the population see the outgoing president?

Arkian: Ahmadinejad was a very popular politician until 2011. Representative US surveys attested him high approval rates before and after the 2009 elections. Two events have been his undoing. One is the economic crisis which, due to the comprehensive sanctions, started to break out gradually from 2011. The other thing is his trivial difference of opinion with Ayatollah Khamenei regarding the appointment of the head of the intelligence service. This temporary difference (which, however, was perceived as an increasing escalation, simply because he went into a spiritual retreat — that in turn was interpreted as a boycott) allowed his conservative opponents to discredit him successfully for conservative voters.

The wildest rumors against Ahmadinejad and his confidants have arisen since then. Western media, by the way, adopted these uncritically without validating them. In any case, this is how his conservative base gradually caved in to a large extent. Ahmadinejad did not succeed in establishing a standalone political party base up until now and, in political terms, invested too heavily in Rahim Mashaie instead of selecting and building up a more suitable successor.

Langendorf: Many people still remember the mass demonstrations and violence after the 2009 elections. In your opinion, why was there not a reoccurrence this year, and how would you compare the 2009 and 2013 elections? How do you see the future of the Green Movement?

Arkian: The 2009 and 2013 elections were very different. Back then, a popular president was seeking reelection and Iran was not in the middle of an economic crisis. Instead, the dominating issue was corruption. This year’s election was about economic competence, a topic that is less suitable to act in a populist way. This was different in 2009, when the reelection seeking president was a populist who knew how to mobilize the masses with the issue of corruption. This, however, led to the phenomenon that the ones who didn't like him, really disliked him after that. At that time, a strong polarization within the political elite and among voters emerged.

A day before the election, I forecasted that the Islamic Republic would face the most tumultuous days in its history. It was foreseeable that the losing side – no matter who that would be – wouldn't have been satisfied with its defeat. The election campaign was fought with no holds barred. In televised debates, seen by millions of people, one could witness libel and character assassination – even against uninvolved third parties.

In 2013, all of this didn't happen. Candidates behaved a lot more professionally; the televised debates were issue focused; and after the tragedy of the 2009 election which, in the end, harmed the country and thereby every faction, a discourse focusing on the rule of law arose, led by the supreme leader, the head of the judiciary and the speaker of parliament. This resulted in the sensitization regarding the compliance with the law among the political elite and voters. This sensitization led to the fact that none of the defeated candidates raised accusations of manipulation, although the election was won by the narrowest of margins.

I think the ideals and ideas of the Green Movement have never died. But because the Green Movement, in the heat of the moment, betrayed its own ideals by denying a democratic decision – in the name of democracy and the rule of law – the label "Green Movement" has no future in Iran, but its ideals have.