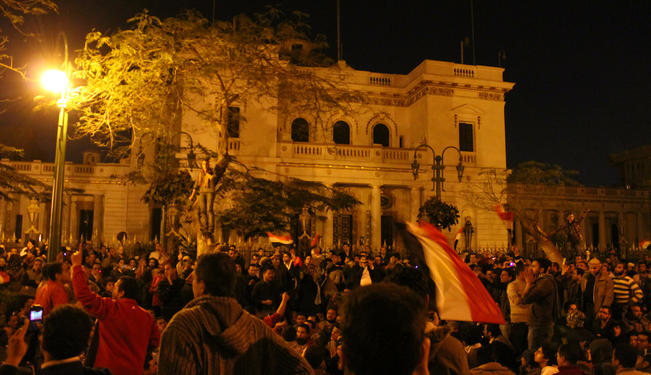 All of Egypt's political forces need to take responsibility for past failures and understand that a consensus is the only way to establish the shape of the future Egyptian state, argues Omar Farahat.

The rulings of the Egyptian Supreme Constitutional Court that resulted in the nullification of the People's Assembly and the continuation of the presidential elections between two extremely polarizing candidates, ushered in an era of institutional chaos that possibly exceeds in uncertainty the turbulent aftermaths of the 1881 and 1919 revolutions.

This disastrous outcome of Egypt's so-called "transition" was highly predictable since the constitutional reforms, suggested by a pro-Islamist committee led by Tariq al-Bishri, were approved by a popular referendum in March 2011.

Yet, pro-revolutionary groups, public intellectuals and former presidential candidates were very quick to describe the Constitutional Court's rulings, issued on June 14, as a judicial or "soft" coup d’état. These included the prominent April 6 Youth Movement, former presidential candidate Abdul Mone'im Abul-Futuh, the Tahrir Daily and Shorouk newspapers, as well as Nathan Brown, the acclaimed professor of democratization and constitutionalism in the Arab world. The reason being, is that by dissolving the only elected institution and permitting former Air Force General Ahmed Shafiq to remain in the presidential race, the Constitutional Court has allowed the military to maintain its stronghold on all state institutions.

The reaction to this has been hasty at best and self-damaging at worst. In fact, assuming that the Supreme Council of the Armed Forces (SCAF) had intended all along for this to be the outcome – while securing the cooperation of Egypt's top judicial body – is giving the military much more credit than it deserves.

The attempt to decipher the hidden, and often twisted, intensions of a malicious and more powerful person or entity is a very deeply-entrenched trait in Egyptian culture to which the felicitous term hada'a is ascribed. Hada'a, however, is not a particularly revolutionary trait. It is a survival mechanism designed for those in disadvantaged and oppressed situations.

While consistently raising the indispensable and powerful slogan "the revolution continues", Egyptian revolutionaries (myself included), do themselves and their country no favor by insisting on taking passive stands against what they see as the premeditated and malicious designs of the SCAF.

Urging young Egyptian revolutionaries to take a more active and empowered position, it must be emphasized, does not mean that we should assume that the SCAF generals are a group of well-intentioned or completely oblivious individuals. They are a group of stubborn officers who control tremendous amounts of resources, physical military power, US financial and political sponsorship and state bureaucracy. They are, however, no political or constitutional geniuses, and neither are we.

This is precisely what we, Egyptian pro-revolution youth, need to acknowledge. We need to be able to see failure where it occurs. Indeed, the current state of Egyptian institutional and political chaos is a manifestation of an unprecedented state-wide collective failure in which everyone participated. And by everyone, I mean absolutely every active group or individual on the Egyptian political scene.

The SCAF were wrong in thinking that having a Muslim Brotherhood-designed – but error-filled – transition would help alleviate public anger and restore law and order quickly, with the least possible damage to their economic interests. Likewise, the Muslim Brotherhood were wrong in thinking they could control all state authorities through a combination of reliance on their superior political machine, along with a great deal of deception of other political powers and Egyptians in general. The Brotherhood's promise to restrict their participation in Egypt's new institutions directly contradicted their numerous attempts to fully dominate the constitution-writing process, as well as legislative and executive authorities. Consequently, this dramatically decreased the level of trust they enjoyed among many ordinary Egyptians.

Meanwhile, liberal and leftist political parties and movements were also wrong to jump into the political scene with all the ideological fights that it involves without first making sure that the rules of the game were well-established. Moreover, the revolutionary youth were wrong in stubbornly insisting on their pre-February 11 tactics. They were also wrong in assuming that consistently raising abstract claims and pressuring state authorities and ordinary Egyptians by occupying public places, was the only guaranteed way to reach their demands.

When I was in elementary school, I remember that, at the start of the mid-day break, all of the children would rush to the equipment room and a fierce fight over soccer balls would ensue. The assumption was that whoever was able to hold the ball at the outset would keep controlling the game until the end of the break, which in fact was never the case.

Saying that all political groups must responsibly come together to reach a well-reasoned agreement on the shape of Egyptian state and politics in the next few years, is not a type of empty patriotic rhetoric. It is an established fact that Egypt needs a solid constitution which the overwhelming majority of politically relevant groups agree to. It is also an established fact that Egypt will always have a large and wealthy military, strong Islamist groups, leftist and liberal parties and intellectuals, many devoted revolutionaries and a significant amount of religious conservatives.

Simply put, there will be no prospect for democracy until we all understand this fact. If we fail to understand it, we will inevitably witness the establishment of a new authoritarian regime, and it will not be the result of a carefully-crafted plan, but of our own selfishness and incompetence.