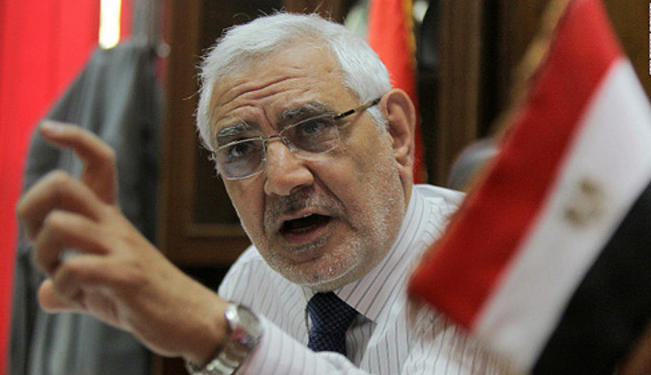 An analysis of the Egyptian presidential elections and the rise of a former Muslim Brotherhood member, Abdel Mone’im Aboul-Fotouh.

Egypt is set to hold its first free and fair presidential elections, as the Arab world’s most populous nation seeks to shift away from military rule and to a civilian elected government. Following the ouster of former President Hosni Mubarak in February 2011, Egypt has been ruled by the Supreme Council of the Armed Forces (SCAF), much to the displeasure of the Egyptian public who demand a transfer of power to a leader elected by the ballot box.

Egypt has already conducted its first parliamentary elections since the Arab uprisings began. The result saw the Ikhwan al-Muslimeen (Muslim Brotherhood) win the majority of seats: its political branch, the Freedom and Justice Party, won 47% of seats in the Egyptian parliament. The ultraconservative Salafist Al-Nour Party won over 24% while the moderate Islamist party al-Wasat also won a small percentage of the vote.

Due to the electing of Islamic political parties in Egypt, there has been scepticism from secular, liberal, and Coptic Egyptians, who view the rise of the Brotherhood and the Salafists as a sign that Egypt will turn into a theocracy.

Moreover, the victory of Rachid Ghannouchi’s An-Nahda party in Tunisia last year, the appointing of an Islamist prime minister in Morocco, and the significant gains made by the Islamist-tribal coalition in Kuwait have prompted analysts to remark upon the changing political tide in the Middle East and North Africa.

Furthermore, some observers argue that Turkey’s Recep Tayyip Erdogan and the Justice and Development Party (AKP) are also part of this shift towards “Islamism” – a label the Turkish prime minister rejects – due to his background and previous imprisonment by the state. Significantly, analysts have held up Erdogan’s Turkey as an example that represents a balance between Islamic conservatism and secularism.

Many observers argue that a relatively unknown candidate (which for some is a cause for scepticism) is capable of creating a balance between Islamism and secularism, and of leading the country into the future: Abdel Mone’im Aboul-Fotouh. A former member of the Ikhwan, he was imprisoned twice by Mubarak and has since joined the race to succeed him at the helm of Egyptian politics.

Once a senior member of the Muslim Brotherhood, Aboul-Fotouh left the political movement last year when the Ikhwan decided not to field a presidential candidate (a decision they later changed). He was one of the first candidates to submit his application to participate in the polls.

Significantly, Aboul-Fotouh – an independent candidate – has been portrayed as a “moderate” Islamist with reformist enthusiasm. His appeal has garnered support from secular liberals and even from the ultraorthodox Salafists.

After 10 of the initial 23 candidates were disqualified, including the Ikhwan’s Khairat el-Shater, Omar Suleyman, and Hazem Abu Isma’il, Aboul-Fotouh emerged as a front-runner along with Amr Moussa, a secular candidate. Moussa, the former foreign minister under Mubarak and the former secretary-general of the Arab League, is now directly competing with Aboul-Fotouh in the polls.

The two favourites participated in the Arab world’s first televised presidential debate that drew millions of viewers from Egypt and beyond. Aboul-Fotouh and Moussa exchanged words in a heated debate over the role of religion in Egyptian society and other issues such as political, social, and economic reform. Moussa accused his rival of being a hard-line Islamist due to his previous Muslim Brotherhood membership, while Aboul-Fotouh retaliated by criticising the former foreign minister for being a member of the Mubarak regime.

"My point of reference is the nation, your point of reference is the Brotherhood," said Moussa, who seeks to appeal to Egyptians concerned about the rise of Islamic political parties. Aboul-Fotouh retorted by stating: "I want to hear one word of opposition you said under Mubarak's regime,” calling out Moussa’s erstwhile support for Mubarak and his National Democratic Party (NDP).

Meanwhile, as a result of el-Shater’s disqualification, the Ikhwan nominated Mohammed Morsi to stand for the election. Morsi is the chairman of the Brotherhood’s Freedom and Justice Party.

El-Shater was disqualified due to his previous conviction and imprisonment under Mubarak’s political crackdown. The disqualification of el-Shater was a significant loss to the Ikhwan. Shadi Hamid, from the Brookings Institute, said: “Morsi was the backup for a reason. El-Shater was the only one among them who looked remotely presidential. It’s a big blow to the Brotherhood.”

Significantly, following the disqualification of Abu Isma’il, a Salafist candidate, the Al-Nour Party decided to back Aboul-Fotouh in a strategic move. To counteract the dominance of the Ikhwan’s Freedom and Justice Party, the Salafists chose to support Aboul-Fotouh to potentially avoid the election of the Brotherhood’s presidential candidate. Indeed, liberals and Coptics fear that the Muslim Brotherhood is attempting to monopolise power by backtracking over its initial decision to not nominate a candidate for the presidency.

Domestic and Foreign Policy
Meanwhile, for many Egyptians, Aboul-Fotouh represents an alternative to the Ikhwan, despite being a former member. Some of his main domestic policies include plans to increase health and education funds, and to strengthen the Egyptian army. His outlook is to boost the economy, something that is in desperate need due to the long-standing stagnant economic growth of the country. Indeed, Egypt needs significant economic, social, and political reform – like the rest of the Arab world.

Some issues which need to be addressed by the new president and his government include creating better job opportunities for graduates and non-graduates, education, affordable housing, adherence to women’s rights, and the protection of minority groups such as the Coptic Christian community. If Aboul-Fotouh is successful in his bid to become Egypt’s president, he would need to address these underlying issues that arguably led to the start of the ongoing revolution.

On the subject of foreign policy, Aboul-Fotouh has taken the stance which most of the candidates have regarding the peace treaty with Israel. He has called for a review of the peace treaty that was signed by late President Anwar el-Sadat in 1979 and maintained by Mubarak ever since.

“I still view the peace treaty as a national security threat to Egypt and it must be revised. It is a treaty that forbids Egypt from exercising full sovereignty in Sinai and allows Israelis to enter Sinai without visas, while they need visas for Cairo,” stated Aboul-Fotouh. The treaty does not allow for Egypt to maintain a military presence in portions of the Sinai Peninsula.

According to Egypt Independent, Aboul-Fotouh said Israel was “a racist state with 200 nuclear warheads”, which he argued was a threat to Egyptian security.

Indeed, whoever is elected president is going to have a significant impact upon the relationship between Cairo and Tel Aviv. The Israeli Prime Minister Binyamin Netanyahu has made various statements regarding the rise of the Muslim Brotherhood, and views the electing of a possible Islamist president with extreme caution.

However, regardless of whether Aboul-Fotouh, Moussa, or Morsi win the race, their job will be to move the country away from military rule, to form a new unified government, and to improve the lives and living conditions of 80mn Egyptians. Though it is far from clear who will win the election, one thing is certain: Egypt needs a new path.