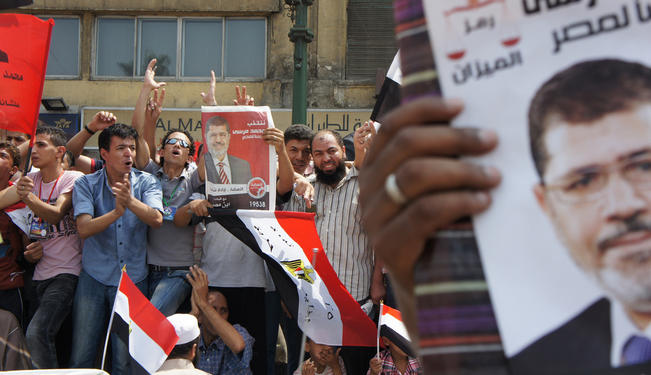 The Muslim Brotherhood's Mohammed Morsi has been unveiled as Egypt's first democratically elected president, amidst the dissolution of an Islamist dominated parliament and the controversial constitutional amendments enacted by the SCAF.

Mohammed Morsi, the Muslim Brotherhood's presidential candidate, has been declared as Egypt's new president amid political uncertainty which continues to surround the country. Despite holding free and fair parliamentary elections at the end of 2011, which saw the Muslim Brotherhood's Freedom and Justice Party (FJP) win over 47% of seats, a recent high court ruling has dissolved parliament. Moreover, generals from the ruling Supreme Council of the Armed Forces (SCAF) have implemented a decree which significantly limits the powers of the incoming president.

The presidential run-off saw a battle between an Islamist, Morsi, and a felool (former regime remnant), in Ahmed Shafiq. Farouk Sultan, the Head of the Election Commission, delivered the results as millions of people across Egypt and the Arab world watched on television. The results were delayed for many days following the run-off as the election committee investigated claims of fraud and complaints from both parties. The tally saw Morsi win 51.7% of the vote, while Shafiq received 48.3%. The election, however, only saw a 51% turnout.

Meanwhile, following a high court ruling which dissolved the FJP and Islamist dominated parliament, the SCAF has assumed full legislative power in Egypt. The court declared that one third of parliament was elected illegally and concluded that the entire body should be dissolved. The ruling military junta also implemented constitutional amendments, resulting in only limited executive authority being transferred to Morsi, the president-elect. The SCAF have made it clear that the incoming Egyptian president is not the country's commander-in-chief, which effectively means Morsi has been stripped of his powers. Notably, the military granted itself broad legislative authority, including control over the nation's budget until a new parliament is elected. Currently, the powers of the president-elect are not clearly defined.

Significantly, since there is an absence of a parliament, Morsi would be required to take his oath of office before the Supreme Constitutional Court. However, as noted by Al Jazeera English's Mike Hanna: "To take an oath in front of the court would be to implicitly recognize the constitutional authority of the body that wrote the amendments, [the] SCAF, and at the same time it would acknowledge the legal correctness of the Supreme Court in endorsing these amendments." Subsequently, while clearly knowing the implications of taking the oath in the court, the Brotherhood have reportedly stated that Morsi will take the oath before parliament, since they reject the court's parliamentary ruling and the constitutional amendments. A recent statement from the FJP read: "The constant threat to dissolve a parliament elected by 30 million Egyptians proves that [the] SCAF wants to hold on all powers against popular will."

The high court ruling has been dubbed a coup by opposition figures, including secularists and liberals. As a result of the court's decision – enacted by judges initially appointed by former President Hosni Mubarak – the Brotherhood has lost its key power base in parliament. Mohammed El-Beltagy, a senior FJP figure, called the court ruling and the constitutional amendments a "fully fledged coup," and a ploy for the SCAF to prolong their rule. The former presidential candidate and ex-Brotherhood member, Abdel-Mone'im Aboul-Fotouh argued that: "Overturning the elected parliament after granting the military police the right to arrest is a complete coup and whoever thinks that millions of youth will let it pass is deluding themselves."

Since the constitutional assembly – which has the job of drafting the country's new constitution – is in a state of uncertainty after the dissolution of parliament, many have seen the electing of a new president as pointless since his powers are not defined. Meanwhile, a SCAF advisor recently told Al Jazeera that the new president would be a temporary transitional one, and further elections for a new parliament and president would possibly take place over the next year.

As a result, instead of holding a six year term, Morsi may only be an interim-president, should the military's claimed plans succeed. Mohammed El-Baradei, the former head of the International Atomic Energy Agency, who is popular amongst revolutionaries, stated: "The election of a president in the absence of a constitution and a parliament, is the election of a president with powers that not even the most entrenched dictatorships have known." The drafting of a new constitution remains a key issue for the ongoing Egyptian revolution. Since parliament has been dissolved, the constitutional assembly, which was appointed by the parliament, is in disarray. According to analysts, the SCAF is likely to take over the writing of the constitution before holding fresh elections again, much to the displeasure of pro-revolutionaries and the Muslim Brotherhood.

Meanwhile, after pledging that he would resign from the Muslim Brotherhood and the FJP, should he become president, the Brotherhood has since confirmed that Morsi is no longer a member of the party. Mahmoud Hussein, the FJP's secretary general, said: "We have terminated Morsi's membership in fulfilment of our promise when he becomes president of all Egyptians."

Morsi, who was imprisoned under Mubarak's regime, was the Muslim Brotherhood's second choice candidate and only stood for the presidency after Khairat El-Shater was disqualified. Since the uprising which ousted the former president began, the Brotherhood has shifted from supporting the revolutionaries, to making friendly overtures to the military and now again supporting the revolution. Indeed, the Muslim Brotherhood has lost support amongst Islamists, liberals and secularists after they back-tracked on their decision not to field a candidate for the election. This was reflected in the presidential elections, particularly in the first round which saw a drastic drop in votes for the Brotherhood's candidate, compared to the parliamentary elections. The FJP initially stated in 2011 that they would not participate in the presidential vote – which led to the resignation of Aboul-Fotouh – but later fielded El-Shater before Morsi took the candidacy.

Morsi and the Muslim Brotherhood will need to prove to the Egyptian people that they can safeguard the ongoing revolution, lead the country away from military rule and to respect the freedom and rights of all groups, including religious minorities and women. Moreover, if given the chance, Morsi will need to reform the state and quell fears of an Islamist takeover, and the transformation of Egypt into a theocracy. Gehad El-Haddad, Morsi's campaign spokesman, sought to ease these fears by stating on Al Jazeera English that Egypt would remain a secular state, inclusive of all political and religious groups, including women and Copts. Notably, if this is true, Morsi will need to act fast to gain the trust of all Egyptians.

Indeed, the presidential elections, and in particularly the run-off, has severely polarised Egypt with Brotherhood supporters and revolutionaries on the one side, and supporters of Shafiq (along with many Coptic Christians) and the old regime on the other. After the election commission's announcement, Morsi rightly called for national unity as political uncertainty surrounds Egypt, particularly due to the SCAF's hold on power. "Today I am a president for all Egyptians, wherever they may be," Morsi said in his first address to the nation as president-elect. He went on to state: "The revolution goes on, carries on until all the objectives of the revolution are achieved and together we will complete this march. The people have been patient long enough. I call on you, great people of Egypt… to strengthen our national unity… [this] is the only way out of these difficult times." The president-elect has said he intends to form a coalition government with members from other parties, including secularists, liberals, leftists and Copts.

Morsi's words will clearly be judged by his actions. He will first need to gain the trust of all Egyptians if he is to lead the country away from military rule. If Morsi, and the Egyptian people, succeed in doing so, the president-elect will need to enact various social, political, and significant economic reform to boost the stagnant economy.

Indeed, the Egyptian people – from all political leanings and religious groups – need to find this "national unity," which Morsi has called for, to safeguard the ongoing revolution and to move the country away from military rule. A truly united group of people can never be defeated. The sooner the Egyptian people realise this, the better chance they will have at ending the military's grip on power.

The future is likely to see a power struggle between Morsi and the Brotherhood, against the SCAF. The Muslim Brotherhood is highly unlikely to engage in a direct or violent confrontation with the military, but will instead use its prowess at the height of Egypt's political spectrum to continue with demonstrations, hold possible labour union strikes and conduct negotiations with the military.

At the moment, however, Tahrir Square has been filled with protestors for nearly one week. They are demanding an end to military rule, the handover of power to the civilian elected president and the reinstatement of parliament. Time will tell if and when their demands are met. Until then, the echoes of "down down with military rule" will still be heard.