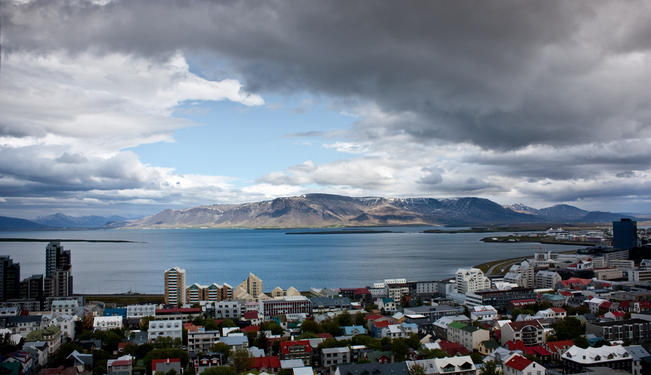 In the fall of 2008, the collapse of the Icelandic banking system sent thousands of promising young Icelanders into unemployment. Today, Iceland's Generation Y is turning to entrepreneurship to dig out from under the country's financial crisis.

On the morning of October 6, 2008, Georg Ludviksson walked across a parking lot towards a gleaming, modern red office building for his first day of work at Glitnir, one of Iceland’s largest and most prominent banks. Ludviksson had just returned to Iceland from a stint in the United States, where he had earned his Masters degree at Harvard Business School and founded a company called UpDown.com with two of his Harvard colleagues. While Georg ultimately moved on from UpDown.com, the business experience and his newly minted MBA had earned Ludviksson a spot at one of Iceland’s most coveted employers. In 2008, banking in Iceland was highly regarded, and top candidates could expect to make upwards of $400,000 per year only two or three years after joining a bank. As Iceland’s Indian summer rays warmed the parking lot on that Monday morning, Georg Ludviksson hoped that his career prospects were as bright as the sun.

By Thursday, Georg was out of a job.

Georg Ludviksson was Glitnir’s last hire before the financial crisis brought the Icelandic banking world to its knees. In an effort to stem concerns over insolvency and a looming $750 million debt obligation, the Icelandic government nationalized Glitnir on September 29th, but investors were unappeased and the bank failed on October 8th. Two other major Icelandic banks – Landsbanki and Kaupthing – also failed that week. By the time the dust settled, some 5,000 Icelandic financial professionals and support staff had been laid off over just three months. In tiny Iceland, it tripled the unemployment rate almost overnight.

Politicians at home and creditors abroad squabbled and pointed fingers as panic began to set in. Iceland’s credit rating plummeted, its foreign debt holders clamored for restitution, and the United Kingdom exercised a provision in its Anti-Terrorism, Crime, and Security Act 2001 to seize assets in Icesave, one of Iceland’s Internet banks. Protesters surrounded the Icelandic parliament building, infuriated that its political and business leaders had reduced their country to such a nadir. Political instability is virtually unheard of in Iceland, and it shocked the nation to see protesters pelt politicians with eggs, paint, and rocks. As the political, financial, and social institutions in Iceland seemed to be coming apart at the seams, many in Iceland’s Generation Y saw only one option: innovate.

Entrepreneurship does not come naturally to these hardscrabble, risk-averse islanders. A thousand years of struggling for survival on windswept rocks and rugged terrain left Icelandic ancestors with little time for creativity, and the harsh winters made sure that anyone willing to try a new idea would almost certainly pay dearly. Socialized programs introduced in the late 1900’s provided for those who couldn’t provide for themselves, but Icelandic culture stigmatized reliance on public welfare. That potential shame – and the huge opportunity cost of foregoing massive banking salaries – created disincentives for many who might have otherwise sought to start their own company before 2008. After the financial collapse, however, there were suddenly thousands of smart, young Icelanders (nearly all of whom were living in Reykjavik) with nothing to lose. The race to turn Iceland into a hotbed of entrepreneurship was on.

In 2008, Kristjan Kristjansson worked at Landsbanki, one of the three banks decimated by the crisis. Kristjansson is now an entrepreneur and CEO of an Icelandic entrepreneurship incubator called Innovit, though he also manages TEDx Reykjavik and owns a company that sells volcanic lava ash. In a recent interview, Kristjansson cited some staggering figures as to how quickly Icelanders have flocked towards entrepreneurship. In 2008, a business competition held in Reykjavik attracted some 100 applicants. By 2010, that number had quadrupled to 400, and Kristjansson estimates that roughly 2,100 Icelanders had applied for or attended entrepreneurship events in 2011. For most of the world, 2,100 people doesn’t seem like much, but in Iceland, that’s 1% of everyone in the labor force.

Kristjansson cites several reasons why entrepreneurship has found such fertile soil in Iceland. For one, distribution of new ideas and products throughout the country is relatively easy, as one in three Icelanders live in the capital city of Reykjavik and nearly everyone else lives along the country’s one main road (named aptly enough, “Route 1”). Another reason is that most young Icelanders speak at least passable English (and many speak nearly fluently), which means that products and services can be created, developed, and marketed abroad easily. Lastly, besides driving talent towards the entrepreneurial community, the financial crisis did one more favor to the world of Icelandic entrepreneurship: it destroyed the Icelandic kronor’s value. Whereas one US dollar once bought 60 Icelandic Kronor, it now buys 123.

For its part, the government has taken small steps to embrace the new trend.  Reykjavik University has created a mandatory course on entrepreneurship, and Kristjansson has been tapped to teach the course. Reykjavik University, the Federation of Icelandic Industries, and the New Venture Fund (Iceland’s pension fund) have also helped to fund Kristjansson’s entrepreneurship incubator Innovit. Individual investors are beginning to realize the investment opportunity this boom has created, and in 2010 alone, some $10 million went to funding new ventures.

As for Georg Ludviksson, Glitnir Bank’s last hire, he has come to symbolize the growth of Iceland’s nascent Silicon Valley. In 2009, he built a website called Meniga to help Icelanders track their financial spending – a sorely needed service in the new hard times. As of September 2012, 20% of Icelanders use the site, Meniga has opened a satellite office in Stockholm, and it is on pace to become the largest personal finance management software in Europe by next year.  Twenty-two young Icelanders – many of whom might have ended up supporting the banking industry in another era – now work at Meniga, and it boasts revenues of approximately $4 million per year.

Although Iceland is still weighed down by its 123% debt-to-GDP ratio, it is unlike any of the other debt-laden European countries in that it is turning inward – not outward – to climb out of its fiscal ditch. While Greece, Spain, and Portugal all seek external debt deals with the EU, Icelanders have turned to their own innovative capabilities. “It’s more acceptable to be an entrepreneur now [than before the banking crisis],” Ludviksson said in an interview in August. “Entrepreneurship is going to help Iceland pull itself out of this mess. We have a proud, independent spirit, and we’re going to prove that we can recover on our own.”