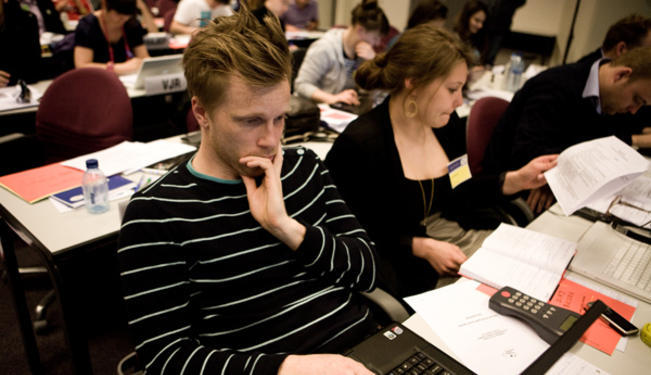 In the wake of the global financial crisis and the ongoing European debt crisis, yet another category of marginalised citizens emerges. Steadily growing rates of youth unemployment in the European Union have become an urgent concern for policymakers as 5m labour market participants between the age of 15 and 24 are currently unemployed. This is one million more than in 2008 and the overall unemployment rate for young people in the EU is now over 20%. Moreover, the lowest rates of youth employment in the history of the EU were recorded in the beginning of 2011. According to a new study by the the European Foundation for the Improvement of Living and Working Conditions (Eurofound), youth unemployment currently costs EU member states 2bn euros per week in excess social transfers and foregone earnings. There is no doubt that these figures tell an alarming story.

The issue of youth unemployment is multifaceted. When young people attempt to enter the labour market, they face a host of challenges at different stages of the process. Unfortunately, there is no single solution or initiative that can wipe out these problems in one blow. First, young people have traditionally been a vulnerable group in the labour market. If jobs are scarce, they compete against more experienced workers and are often the first to go when employers need to downsize. This phenomenon is not new but in combination with other recent developments in the labour market, it contributes to the difficulties young workers face when trying to find employment.

Second, young people are overrepresented among those working under precarious conditions. This means that young workers are more likely than the average employee to work part-time, on temporary contracts or with low levels of social security and low wages. In the current economic climate where even highly experienced workers have difficulties finding employment, many young people are forced to enter the labour market through its grey areas or informal channels. According to Eurofound, workers who start their careers in precarious jobs run a high risk of staying in them. Solving the problem of high youth unemployment is therefore not only a question of short-term working conditions but of long-term earning potentials for millions of people.

Third, young workers are more likely than average to experience recurring spells of unemployment even if they work under perfectly legitimate conditions. Like other marginalised groups in the labour market, they may find it nearly impossible to secure stable and decent employment. Growing tendencies of labour market segmentation should be firmly addressed in order to foster better working conditions not only for young people but also for groups such as ethnic minorities and women. With increasingly loose hiring and firing practices developing as a result of the EU’s new flexicurity policies, workers of all ages risk working on a string of fixed-term contracts.

Flexicurity principles were not originally reforms intended to undermine workers’ rights but a whole toolbox of labour market policies. Ideally, with flexicurity principles, employers are able to adjust their workforce according to market needs by offering flexible job contracts while workers are financially secured when between jobs through generous social transfers. However, it seems that flexible work contracts are rapidly becoming the norm in many sectors. The temporary and agency work directive adopted by the EU in 2008 serves as a prime example of how policymakers acknowledge and encourage of the use of this type of employment contract. Unfortunately, providing an adequate level of social security is less of a priority for many European governments. Young people and others who operate on the edge of the labour market are thus often left with no choice but to accept whatever contract they are offered in the hope that it will lead to secure employment at some point.

In addition to the economic disadvantages of being unemployed, those who stand outside the labour market or who transition in and out of it, usually also experience social disadvantages following their employment status. Lack of financial security has adverse impacts not only on individuals but on entire households. Young people who cannot find work are often unable to reach acceptable levels of social and economic autonomy. They may have to live with their parents for longer and thus are inclined to form their own family at a later stage. Moreover, according to Eurofound, youth who are not employed or in any form of training or education are less inclined to engage in civil society activities and to participate in politics. Taking this into consideration, it is clear that in countries where youth unemployment rates are close to 50%, the desperate lack of opportunities for young people affects a whole generation and thereby whole societies. To counter this trend and prevent a whole generation of youth from being lost to the European society both economically and socially, the EU recently launched the Youth Opportunities Initiative.

The initiative was adopted by the European Commission in December 2011 and calls on member states to combat youth unemployment through a range of measures aimed at preparing them for the labour market. In the press release following the launch, EU Commissioner for Employment, Social Affairs and Inclusion Lazlo Andor asked member states to work with reducing rates of early school-leaving, preparing young people for the labour market by providing more relevant training and education and facilitating a better transition from school to employment by offering traineeships and on-the-job training. In addition to this, the commissioner called on the member states to make better use of the European Social Fund, which was set up to enhance economic and social cohesion and is an important element in the EU 2020 strategy for Growth and Jobs. It currently has 30bn euros uncommited to projects.

There seems to be no quick way of driving down high unemployment rates, but with this campaign the EU is able to draw attention to important issues that if handled successfully may prevent the situation from further deteriorating. In general, the Youth Opportunities Initiative is focused around education and first jobs. It seems that the strategy behind it is to jumpstart young people’s careers by creating efficient tools to take them straight from educational institutions to the work place. Moreover, the issues that are addressed in the initiative seem to be solvable within educational institutions and through better coordination between the institutions and the labour market.

However, despite President of the European Commission José Manual Barroso’s acknowledgement of labour market policies as an important part of the solution to this problem,the initiative does not address loose employment regulations or how to provide financial security for young workers who are in and out of the labour market. Improved job security in itself does not guarantee higher employment rates among young people. It can however hinder exploitation and ill treatment of a generation struggling hard to carve out a place for itself in the European community.

Furthermore, it should be noted that successful participation in the labour market is not guaranteed after a first job experience or traineeship. A large share of young people who are employed experience spells of unemployment and precarious working conditions. This cannot be remedied through providing a smoother transition from education to employment but must be addressed through regulating the labour market. It is the extent to which young people are able to stay in the labour market over time that should mark the success of policies aimed at reducing youth unemployment.

It will take time before the results of the Youth Opportunities Initiative can be fairly assessed and this applies especially to the goal of reducing overall youth unemployment in Europe. There are also external factors, such as economic growth rates, that may play a significant role in how the suggested policies are received. The lack of political will to revise EU labour market policies does however suggest that this initiative will target the players rather than the rules of the game.