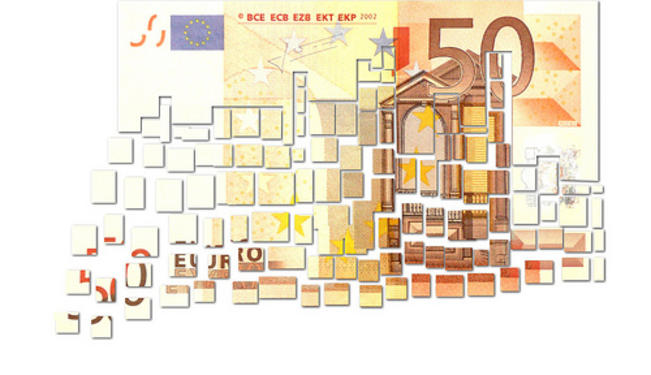 Following the wake of history’s largest and first truly global recession, the European sovereign-debt crisis was similarly precipitated by globalization, the boom in credit availability in the early-mid 2000s, financial deregulation, and by the recession itself. The dilemma has caused drops in major economies’ credit ratings, economic stagnation, heated public and political backlash, unpopular bailout packages and the extensive refinancing of Greece. Despite the global implications of the issue, the euro crisis is still to some extent a regional dilemma, one that reveals several structural paradoxes within the euro zone as a region sharing one monetary policy.

The benefits afforded by the euro to poorer countries were clear from the outset: higher credit ratings and lower interest rates on loans. Considering that the euro’s introduction coincided with the rise of global investment capital in the early-mid 2000s, variously referred to as the “global savings glut” and the “Giant Pool of Money,” the opportunity for easy loans was unprecedented. Greece, whose financial woes would eventually precipitate the current crisis, engaged in deficit spending, enjoying an annual GDP growth of 4.2% during the years 2000 to 2007.

There is also a great disadvantage for those same poorer nations: unable to control their monetary policy, financial competitiveness is a much loftier goal. Typically, a smaller economy’s currency naturally depreciates, or falls, when exports stagnate, increasing competitiveness. Since the euro is shared by strong and weak economies alike, its value tends not to fluctuate heavily. This can prove troublesome for struggling economies, and indeed partially explains why recovery is so slow for Greece and Portugal.

When industry bubbles popped during the global financial crisis of 2007, several euro zone nations, particularly Greece, Portugal and Ireland, were saddled with worthless assets and high liability. Their massive government debt and deficits were results of the crisis, irresponsible spending and a lack of control over monetary policy. This marked the beginning of the euro crisis.

Greece has followed a tradition of deficit spending for several decades; the transition to the euro and the opportunity presented by the boom in global capital was thus an unfortunate combination.

In December of 2009, Greece revealed its national debt to be €300bn euros, or 113% of its GDP, nearly doubling the euro zone limit of 60%. Months later, an EU report revealed the country’s budget deficit to be 13.6% of its GDP. In May of 2010, Prime Minister Papandreou announced austerity measures designed to curb the deficit; the euro zone members and IMF subsequently granted Greece a €110bn bailout package.

Cause of debt: Bursting of property bubble in which major banks were invested; estimated €100bn lost; economic collapse in 2008.

Ireland’s debt crisis was a direct result of property bubbles collapsing in 2007. Unemployment shot up from 4% to 14% in 2008, while the budget reached a euro-zone-record deficit of 32% GDP. The Irish government took out international loans to bail out banks and property bondholders, while enforcing severe austerity measures on the public.

On November 29, 2010, the EU and IMF, along with the UK, Denmark and Sweden, granted Ireland an €85bn bailout package, nearly of half of which was spent on stimulating the country’s financial sector. Months later, EU leaders chose to cut the interest rate on the package down to 3.5% and doubled the loan time to 15 years, easing the country’s burden.

Student and labor union protests around the country have been a common occurrence since austerity measures were implemented. Nevertheless, Ireland has seen more success from the approach than Greece, and is being hailed by some sources as a model for European debt recovery.

In late 2010, the EU denied that Portugal would be next to require a bailout package after Ireland. In May of 2011, it would contradict that statement by approving a €78bn loan for the country. National unemployment rates have steadily increased in the past decade and are now at 13%.

Portugal’s case is perhaps the most unfortunate of the three. While it shares some qualities with Greece, namely deficit spending leading up to their adoption of the euro and a lack of economic competitiveness, Portugal displayed relatively high recovery rates in the months following the global financial crisis. Its debt, at 83% GDP, is on par with the average Western European country. Robert Fishman has argued that a misunderstanding of Portugal’s economic model and financial history has led credit rating agencies to unfairly devalue the nation’s credit, calling for greater regulation of financial analysts.

Other nations at risk

Italy has a national debt of €1.9tn, approximately 120% GDP, but has received a comparatively low amount of pressure because more of its debt is domestically owned and has a longer maturity. Nevertheless, reverberations of economic distress are evident in Italy’s public sphere, where austerity measures have gone into effect, and the political sphere, as long-time PM Silvio Berlusconi was finally replaced.

Spain has a relatively low public debt, and has successfully made efforts to cut its deficit. However, the country’s unemployment has reached a dismal 23%.

In 2008, the failure of Lehman Brothers and its consequences on US financial markets made clear the risk of contagion in a globalized world. A shared currency with failing economies puts the other euro zone nations under an even greater risk, particularly those who own those economies’ debt. France, for example, owns over €400bn of Italy’s debt; were Italy’s credit rating to drop substantially, France would suffer. The chain created by debt links all world economies together.

A combination of bailout packages and austerity measures has thus far been the EU’s favored short-term approach to the situation. However, this method has drawn criticisms from Keynesian economists, who argue that austerity will slow economic growth to the point where recovery will take many years. Several Keynesians have suggested foreign investment and cuts of low-wage incomes to stimulate growth.

Austerity has also created widespread public and political backlash in the affected nations. Labor unions have criticized public spending cuts as unfair punishment of the workforce for a dilemma created by the financial sector. Violent riots in Greece, as well as frequent protests throughout Europe, including the M15 and Occupy movements, symbolize the public’s dissatisfaction with the way the issues are being handled.

Another controversial alternative solution is the introduction of Eurobonds, which are bonds issued to the euro zone as a whole before being distributed among individual nations. Proponents of Eurobonds claim that they would not only increase liquidity and alleviate pressure on struggling nations, but also protect the euro from future instability and strengthen its status as an international reserve currency.

The most fervent critics of the strategy are also the most financially stable euro zone member states, including Germany, Austria, Finland and the Netherlands. A poll by German public-service broadcaster ZDF in November 2011 found that 79% of respondents disapproved of Eurobonds. Eurobonds also exist on tenuous legal ground; significant EU structural reform would have to occur first.

But is that reform so far away?

In addition to the short-term strategies designed to curb immediate negative responses from the market, the EU has laid out plans for longer-term reform, including the Euro-Plus Pact, European Stability Mechanism (ESM) and European Fiscal Compact (EFC).

The Euro-Plus Pact is a plan adopted on March 25, 2011, designed to increase the fiscal strength of the member states involved. Its broad goals include boosting competitiveness, employment, maintaining financial sustainability and stability and coordinating tax policy. The plan enforces several rules towards reaching this goal, including abolishing wage indexation and raising pension ages.

The Pact has been adopted by all EU members except for the UK, Hungary, Sweden and the Czech Republic. It has been criticized for being developed behind closed doors, as well as for the infringements on national sovereignty that its policies imply.

Yet tighter fiscal union may be exactly what the EU needs to overcome the debt crisis. This is further exemplified by the EFC, a treaty designed to coordinate fiscal policy between EU members. Drafted during a summit in Brussels on January 30, 2012, the compact was signed on March 2 and will go into effect in 2013 if at least twelve Euro zone countries ratify it.

The EFC is a sort of update of the Stability and Growth Pact (SGP), which sought to enforce fiscal discipline among EU member states. The SGP lacked tangible punitive power, and its criteria were repeatedly duped by manipulative accounting. The EFC will have more strict and specific criteria, to be enforced by the European Commission and the EU Council.

Whether or not the EFC is effective at enforcing fiscal prudence is, of course, uncertain. It is important to note, however, that the EFC does not promote any radically new ideas; it represents a step towards European integration that has been advocated by the IMF and ECB for several years.

When the crisis became a clear threat, the EU established the European Financial Stability Facility (EFSF) and the European Financial Stabilization Mechanism (EFSM) to provide financial relief for the heavily indebted countries. These two programs were only temporary, however, and are set to be replaced by the European Stability Mechanism, a permanent emergency fund. The ESM is therefore a direct result of the financial scare, and will serve as a safeguard during any future emergencies.

Whether or not austerity and bailouts succeed in putting the failing economies back on track, the euro crisis has revealed what happens if you have monetary union without fiscal union. The Euro-Plus Pact and EFC are both pushing the EU towards greater centralization. Will the new, stricter fiscal regulations be enforced, or will the treaties be as ineffectual as the SGP? And what of the UK’s thus-far noncompliant stance towards these steps? The euro crisis marks not the end of the Union, but the beginning of a new chapter in its legacy.