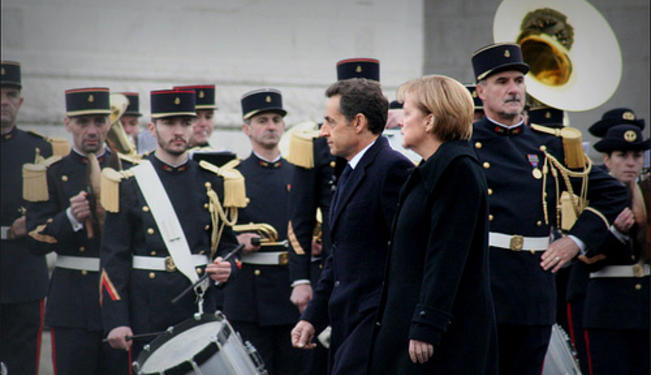 Though Europe’s leaders recognize the scenarios possible for the eurozone, the need for decisive action is greater than ever.

The improvement of eurozone market conditions in January can be attributed to several factors, including the progress made by Prime Minister Mario Monti in Italy, and some constructive if Delphic signals coming from Berlin. It also suggests that a lot of bad news was already priced in in December, including a “credit event” on Greek debt that would trigger payment of credit-default swaps, as now looks very likely. But the eurozone’s fundamental design problems remain unresolved. Even the main positive driver of investor sentiment, the European Central Bank’s long-term refinancing operations offering cheap 3-year liquidity to banks, creates risks of its own. The ECB must have decided to open that window with a heavy heart. A few hard realities have not changed, and if anything have become more inescapable.

First, the core of the crisis is the gradual loss of reference status of the bonds issued by eurozone member states. Sovereign “risk-free” assets are the foundation on which complex financial systems are built. But as Eurozone sovereign bonds are perceived as carrying a risk of non-payment (or credit risk), the foundation becomes ever shakier and the rising tide of distrust engulfs ever more market segments and countries. As things currently stand, even Germany is unlikely to escape a credit downgrade for very long. Thus, the monetary union will become increasingly unsustainable unless a credible reference asset is created at the level of the eurozone, backed either by a joint and several guarantee of the member states (the various eurobond concepts) or a central tax-raising capacity as in most existing fiscal unions. The creation of the European Stability Mechanism (ESM) is but a baby step in this direction.

Second, the credit risk of sovereign debt creates problems in domestic banking systems that cannot be addressed by the toolkit for stand-alone banking crises. This is why the bank recapitalization plan of late October 2011, which assessed each bank’s capital needs on the basis of volatile sovereign yields, is bound to be a policy failure. The sad consequence is that Europe’s longstanding banking fragility cannot be resolved as long as the eurozone’s fiscal framework is not itself fixed. Absent such a resolution, the ECB is justified in providing indiscriminating liquidity support, even if that means prolonging the existence of “zombie banks” and the corresponding misallocation of credit. The same concern underpins the ECB president’s suggestion that there should be no new “stress tests” in 2012. Leaders should buttress the banking system by extending a eurozone guarantee to national deposit insurance schemes, to prevent any risk of retail bank runs, but they cannot hope to restore it to soundness before giving it a new foundation of eurozone-level bonds.

Third, crisis resolution primarily depends not on clever financial engineering, but on political and institutional breakthroughs at the European level. The eurozone’s nation-based political framework is cracking at the seams: the ECB has set the timetable of Italy’s change of government; Greece may formally lose its sovereignty on segments of its economic policy; Germany’s chancellor is becoming a principal player in France’s presidential election. But while national political systems lose their autonomy, existing European institutions remain too weak and not democratic enough to provide an adequate framework for political decision. They lack both executive decision-making capacity, and the ability to make Europe’s citizens feel properly represented. These two dimensions are mutually reinforcing, and major advances are needed on both. Equal representation of the Union’s citizens in the European Parliament (where larger countries are currently underrepresented) would be a good place to start, as the German Constitutional Court suggested in 2009. None of this can be achieved without significant treaty changes, and the considerable risks that come with them, but there is no alternative approach that would make the euro sustainable.

These challenges are reflected in the current central battlefield, namely Greece. The German government seems to have accepted that a Greek exit from the euro would trigger disastrous contagion, but the Greek political system is not delivering the necessary adjustment. If it comes to such a stark choice, most Greeks (though not all) are likely to prefer staying in the euro to a maximalist defense of their country’s economic sovereignty. But this sovereignty has to be transferred to a democratic entity in which Greeks have a stake, not Germany or “Merkozy,” for the trade-off to be viable. In other terms, a meaningful upgrade of EU institutions is a necessary condition for the eventual resolution of the Greek problem.

There is no easy or quick way to solve the eurozone’s complex equation, but one thing is sure: the status quo, even with ESM and fiscal compact, is unstable and unsustainable. The market lull must be used by leaders to prepare the next steps. Otherwise it will be another missed opportunity – with an ever higher price, financial and otherwise, to pay for the lost time.

*[This article was originally published by Peterson Institute for International Economics on February 10, 2012].