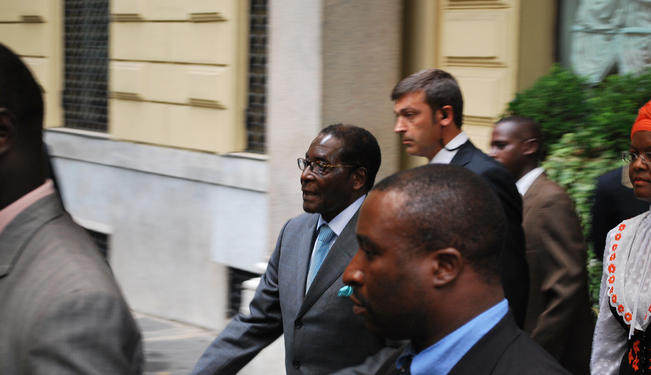 Without credible commitment of all political actors, a smooth transition to democracy will be hard to achieve.

Four years into the Inclusive Government (IG) formed amongst the disputant political parties to unlock the 2008 election deadlock, parties are now readying themselves for another possibly bruising electoral contest without any reforms. Work by the cabinet committee established by principals of political parties to break the deadlock in the constitution making process is stalling amidst deep differences amongst the political parties in the Inclusive Government. Disputed outcomes of national elections over political violence, manifest coercion and outright fraud have become imbedded into multi-faceted crisis that lately plunged the country into unprecedented socio-economic decline and political conflict. Given the insistence by ZANU-PF that elections should be held in the first quarter of 2013 with or without a new constitution, could the country be heading for another deadlock? What prospects is there for a peaceful election whose legitimacy will not be disputed?

Holding free and fair elections which should provide the basis for uncontested legitimacy to any consequent regime would be the best avenue to exit the running political cul-de-sac. The three main political parties, Zimbabwe African National Union Patriotic Front (ZANU -PF) led by President Mugabe, Movement for Democratic Change (MDC-T) led by Prime Minister Morgan Tsvangirai and the Movement for Democratic Change (MDC) led by Welshman Ncube were reluctantly forced into the Inclusive Government through the South African Development Community (SADC) mediation led by former President of South Africa, Thabo Mbeki, who was later succeeded by President Zuma as both President of South Africa and the mediator in Zimbabwe. The Inclusive Government was formed through a process of external mediation and negotiation amongst the conflicting parties fundamentally for the key political actors to collectively and mutually drive a reform agenda that would prospectively lead to free and fair elections and restoration of both domestic and international legitimacy.

Although Mbeki managed to convince the parties to sign the Global Political Agreement (GPA), the founding treaty of the IG and the intervention of his successor at different stages helped to keep the parties together in government serious contradictions have stalled any possibilities for reforms. As SADC insists on the rhetoric of the commitment of all political parties to fulfil the GPA, ZANU-PF continues to violate the same. The former ruling party rejected the MDC parties’ appeals for security sector reform, media reforms and is now blocking the constitution making process although its opponents and SADC are insisting that elections can only be held after the constitutional referendum and a new constitution has been adopted. Stability remains fragile with pockets of premeditated political violence reported while some actors in the military have explicitly stated that they will not recognize any electoral victory other than that of ZANU-PF.

Meanwhile at its December 2012 Conference, the former ruling party ZANU-PF reaffirmed its desire to recapture sole control of the state and to pursue its nationalistic policies. Following the seizure and redistribution of formerly white owned commercial farms to cronies and acolytes in a frenzy of elite primitive accumulation, the party is targeting to seize and redistribute to allies shares in banks, mines and other private enterprises in its’’ empowerment’’ also called indigenization drive against opposition from its partners in the fragile Inclusive Government who argue that such ill-conceived policies will totally shatter the delicate but slowly recovering  economy wiping out the few surviving industries and factories. The blatant violation of property rights and the rule of law will scare away any potential new investors thus scuppering opportunities for fast economic revival. Cancerous corruption is spreading out of control at all levels of the state, private sector and civil society as the public grapple with basic survival amidst a redundant social system whose facilities are in disarray.

President Mugabe, reportedly ailing and frail due to old age, who was endorsed as the ZANU-PF candidate for the forthcoming elections triggered fears of political violence by declaring that he will lead a ‘’wounded beast’’ fight to regain his lost power. Internal divisions over the possibility of his succession within ZANU-PF may in the long run throw the country into a bloody conflict. In the short term factionalism within ZANU PF has also affected the transition process as party elites jostle to position themselves advantageously according to their perception of succession dynamics over national interest for a stable, prosperous democratic country.

It is apparent that there is no will and commitment amongst the political protagonists to allow a smooth transition to democracy. For any reform process to take place there must be a shift in the balance of power that threatens the status-quo. The authoritarian incumbents can only concede to defeat or give concessions only when it becomes clear that the status quo has become an irredeemable threat to their short and long term interests. Thus given that the ZANU-PF regime enjoys a firm hold on power, buttressed by its control of state resources and security structures, there is no chance that they will concede to reforms. In their grand strategy, the former ruling party will push for national elections which it controls, and this can only happen if elections are held without a new constitution. Any elections held within such a context are likely to raise conflicts that will leave the country stuck in deadlock, unless SADC remains steadfast in putting pressure on the disputants to agree on a set of electoral legitimating reforms.

SADC bears the greatest opportunities to positively nudge political parties towards reform. Perhaps the most important factor is the 2nd term victory of President Zuma at the just ended 53rd National Conference of the African National Congress, the ruling party in South Africa. This victory means that President Zuma will lead South Africa in a second term in office that will run to 2017. In his last term it is expected that Zuma will be firmer and more assertive in his diplomatic engagement and foreign policy to set his own legacy. Zimbabwe will possibly be his flush point given its significance to South Africa in both economic terms and geographical proximity. Zuma will also be expected to rally the region towards a consensus that political parties in Zimbabwe will have to concede to; otherwise the country might be caught in another deadlock.