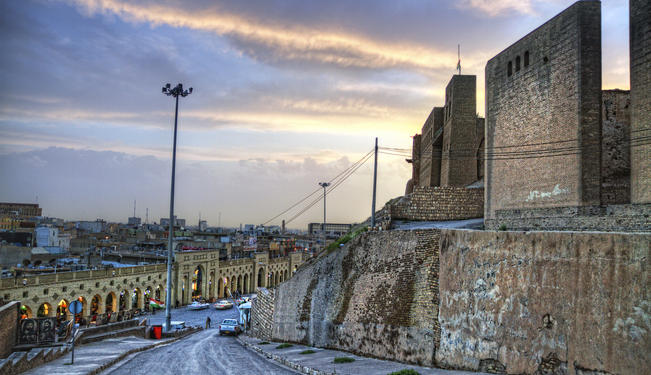 Despite appraisal for Iraqi Kurdistan’s thriving democracy, journalists are under threat.

It appears there are two ways to depict life in Iraqi Kurdistan. Western journalists covering the area commonly invoke the region’s new luxury hotels and airports as symbols of its progress and prosperity. On the other hand, however, local journalists who document the corrupt deals behind the business boom report receiving death threats regularly, while some have been murdered for their work.

Kawa Garmyani, a reporter for the weekly Awene and editor of Rayal Magazine, was shot and killed in front of his home in Kalar City on the night of December 5, 2013. He had covered corruption by the Kurdistan Regional Government (KRG) and had reportedly filed several lawsuits after being threatened.

It has been widely reported by Kurdish media that Garmyani had been threatened by the Patriotic Union of Kurdistan (PUK) politburo member Mahmud Sangawi, who allegedly failed to appear at a court hearing concerning the incident.

An audio file of an alleged telephone conversation between Garmyani and Sangawi was uploaded to YouTube, exposing an exchange where Sangawi appears to be threatening to kill the journalist. A Kalar Court issued an arrest warrant for Sangawi, who has been sued by the Garmyani family. Sangawi was arrested ahead of his appearance in court.

Garmyani’s death — along with the earlier murders of journalists Soran Mama Hama and Sardasht Othman and the 2011 killing of demonstrators in Sulaimaniyah — raises serious questions about the KRG’s claim to be a pillar of democracy in the Middle East and a model for the rest of Iraq.

On the evening of October 26, 2013, in Sulaymaniya, gunmen in a gray unlicensed BMW shot and wounded Shaswar Abdulwahid, hitting him in his right leg. Abdulwahid is the owner of Nalia Satellite TV, the first independent Kurdish satellite station in the Iraqi Kurdistan region. No investigations have been carried out to date.

“I am not a politician or a famous figure in politics in the KRG. I have no private connections with any politicians or political parties,” Abdulwahid stated. “The only reason that they wanted to kill me is my ownership of Nalia TV, as we have been facing many other terrible events in the past three years.”

It was the second time that Nalia TV had been the target of attack by unknown assailants. In the first incident, which took place on February 17, 2011, Nalia’s facilities were set on fire. The attack occurred on the first day of protests against the KRG in Sulaimaniyah, in which ten people were killed and 500 injured by security and Peshmerga (Kurdish armed forces).

Abdulwahid underscored that the attempt to kill him was actually an attempt to “silence his TV.” He said: “The court has issued arrest papers for the [perpetrators], but they are still free [because] they may be above the government or rule [of law].” Wary of the KRG’s judiciary, Abdulwahid said he is working with lawyers on possibly finding an international venue for his case.

The damage to Nalia TV’s facilities was estimated at $10 million. Abdulwahid said he was promised compensation, but there has been no independent investigation or processing of any claims.

Freedom of the press in Iraqi Kurdistan has experienced dark times in the past. In July 2008, Soran Mama Hama, an independent Kurdish journalist, was shot and killed in Kirkuk.

Two years later, in May 2010, another journalist, Sardasht Othman, was abducted and murdered in Erbil. Othman was a journalist who wrote investigative pieces about corruption in the KRG’s ruling parties, in particular the KDP and its tribal structure. Yet the case has not been adequately investigated.

According to documentation assembled by organizations defending press freedom in the Kurdistan region, in the past 11 months more than 200 violations have been recorded, most of them during the campaign for parliamentary elections last September.

Many have praised the KRG’s thriving democracy. But during the political unrest, the security apparatus treated journalists harshly. Kamaran Muhammad, spokesman for the Zar (Mouth) Group for Defending Freedom of Speech, questioned how democratic the region actually is, arguing that the KRG’s treatment of journalists should be judged on the security forces’ response to them during coverage of riots, election campaigns, and sensitive issues.

In May 2013, Metro Center, an organization defending human rights and freedom of speech, criticized the KRG for 40 recorded violations in just four months: “Believing in freedom of speech cannot be carried out only by words; [the] KRG should act.” The center recorded 61 more violations surrounding the September elections.

In an interview four days before Garmyani’s murder, Asos Hardi — general director of the Awene (Mirror) Co for Publishing, founder of Hawllati (Citizen), and winner of the Gebran Tueni Award for the Defense of Press Freedom in the Middle East — expressed his anger at the situation facing journalists.

Hardi asserted: “Our main problem is that there’s no guarantee for the freedom we have achieved in the KRG. Meanwhile, there are two administrations – KDP and PUK – on the ground, and that has made the KRG chaotic.”

Hardi was attacked himself in August 2011 in Sulaimaniyah by a group of men. Five of the assailants were arrested, while three were sentenced to two years in prison. Commenting on the attack, Hardi said: “Many of the higher officials within the KRG and the two ruling parties have their own thugs. Unfortunately, these thugs attack journalists in the center of the cities. Most times, investigations go nowhere.”

He further explained: “Murdering journalists is still a possibility, and almost all independent, critical journalists feel unsafe. Writing on sensitive issues, which are red lines for journalists — like the corruption of the [top] officials in the KRG and the two ruling parties and their families, oil, some historical events and several other issues — may lead to the death of the writer.”

While KRG Prime Minister Nechirvan Barzani spends millions of dollars on advertisements in the international media depicting the KRG as “the other Iraq” and a “region of democracy and freedom of speech,” Kurdish journalists feel unsafe in their own homes.

In a similar vein, Abdulwahid noted that freedom of the press in the KRG is allowed to the extent that “your media outlets are not critical enough to be a threat to the power. Once you cross the red lines, you are in danger.”

One journalist summed up the current situation succinctly in saying that: “Kurdistan is no longer a safe place for a critical journalist.”

Although the Kurdistan region’s parliament passed Law 35 guaranteeing freedom of speech in 2007, journalists are concerned that it is not being enforced. So far, some ten journalists have fled the KRG and sought asylum in the United States and Europe.

On January 5, in most cities of the Kurdistan region, as well as many European countries and Canada, Kurdish people protested to put pressure on the KRG to bring those responsible for these crimes to justice.

In the cities of Slemani, Erbil, and Kalar, these protests have been larger and more sustained, often every week. Erbil’s protest on January 5 featured a large roving lorry that drove along a main street in the city center for 17 kilometers. The lorry, named “The Red Caravan,” carried protesters who held up signs commemorating the victims of the attacks. They demanded for the KRG to investigate the murders of journalists and put an end to violence.

Kurdish intellectuals, scholars, writers, and journalists fear setbacks to the freedom of speech, freedom of the press, and democracy that they have gained by risking their lives. They are concerned that the KRG will become a region where, in their leadership’s eyes, oil contracts and large profits trump freedom and democracy.

*[A version of this article was originally published by Jadaliyya.]