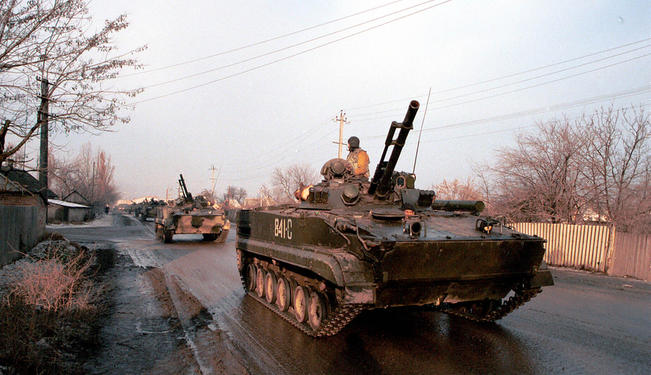 Historically, radical jihadists in Chechnya do not have the ideological ambition to form a network of Chechens against the US, argues Iliana Hagenah.

Ronald Reagan and Margaret Thatcher once called Chechen rebels "freedom fighters" but they are now seen by many as radical Islamists. Chechen Islamists have recently been making the headlines. Dzhokhar and Tamerlan Tsarnaev, the two brothers who recently bombed the Boston Marathon, are suspected to be products of the radical Islamist movement that has gripped Chechnya and parts of the Chechen Diaspora. Chechen history offers clues about whether these radical jihadi Islamists are part of a broader anti-American network or whether they are working on their own.

When thinking about radical Islam in Chechnya, the period to remember is 1994-96: the "First" Chechen War. It was actually neither their first war, nor their first war against Russia. It was certainly the first war when there was a large influx of radical Islamists to Chechnya. Like the Mujahideen in Afghanistan, these fighters came to liberate their fellow Muslims from Russian yoke. They brought with them ideals of establishing an Islamic State.

A core part of Chechen identity is their opposition to Russian control. Even during the early 18th Century, Peter the Great would tiptoe around the Northern Caucasus. It was Stalin who decimated the Chechens and other people of the region. In 1944, Stalin deported large numbers of Chechens to Central Asia, where a fifth of all Chechens died along the way. Chechnya, located in the Northern Caucasus Mountains, is still part of Russian territory.

The Chechen struggle against Russian control has been a blood-bath that plunged Chechnya into darkness. It has spent centuries trying to escape Russia and that conflict has only inflicted ceaseless tragedy upon Chechnya. The Chechen-Russian tug-of-war dates back to the 15th Century, when Chechnya combated Russian invasion by converting to Sunni Islam and gaining the patronage of the Ottoman Empire. Over time, a number of Chechens have converted to Sufi Islam under Persian influence. Today, the Sufis are terrorized by radical Islamic jihadist groups who want to impose radical Sunni Islam in Chechnya.

Saudi fighters, who fought alongside Pashtun rebels during the Soviet-Afghan War in the 1980s, have spawned a generation of Chechen jihadists. The Soviet-Afghan War was a theocratic melting pot for Islamic crusaders. Osama bin Laden was one of the many radical Islamists who turned up in Afghanistan. The Western interpretation of the war as a battle against communism is a simplistic idea, popular with anti-Soviet ideologues. Radical Muslims who fought in Afghanistan did not stop fighting when the Soviet Union fell. Some targeted America, while others moved to Chechnya.

When the “First” Chechen War against Russia finally erupted in 1994, many different actors arrived to promote their ideologies. A Saudi man named Emir Khattab heard about the Chechen struggle against Russia. He started fundraising and sending Wahabi fighters to participate in the conflict against Russia. The war concluded in a peace treaty where Chechens gained considerable autonomy from the Russians. However, by the Second Chechen War of 1996-1999, Chechens became politically vulnerable because of Islamic jihadists, while Moscow’s iron fist reasserted control.

“Wahhabism” became the dominant force in the Chechen movement. Many believe that this made the Second Chechen War and its aftermath far more violent and destructive. The Chechen National Guard and Islamist militants kidnapped, bombed, and terrorized Russians in an effort to demoralize them. They even attacked Sufi mosques. Chechen President Aslan Maskhadov appeased extremists by introducing Islamic law.

The second war has come to be known as “Putin’s War” because his hard-line position proved popular and propelled him to victory. The Islamic International Brigade (IIB) had launched sustained terrorist attacks during the interwar period. Russia classified the IIB as a terrorist organization, while declaring the conflict to a war against “terrorism”.

Russia might have reestablished control over Chechnya but radical Islam continues to flourish there. The most radical Islamist Mujahideen come from a number of different sects. Each of them is a product of its particular history and is often backed by an Islamic charity. For instance, the Arab Mujahideen in Chechnya is funded by a Salafist charity. Islamist Chechens continue to bomb and launch terrorist attacks in Russia.

From the information available about the  Boston Bombings, it seems that the Tsarnaev brothers are not “Jihadists of Chechnya,” but simply “Chechen Jihadists.” In other words, they appear not to be operating for a network from Chechnya but on their own. As yet, Chechen emigres do not have a strong Islamic network in the US. Only about 250 live in the United States, which seems to be a touch too small of a population to provide a base of an entire jihadi network.

In Chechnya, radical Islam emerged because it was a means to fight for freedom from Russian rule. It does not have the ideology or the deep roots of Islamist groups that have functioned in Afghanistan. Many terrorist groups might have read Sayyid Qutb and campaigned against Western modernization but they were never as fanatical or organized as their Afghan cousins. The Tsarnaev brothers were infected by a radical Islam that many Chechens have come to see as the only way forward in the fight for independence against Russia that has been going on for seven centuries. What is surprising is that they turned their ire against the US, the country whose president once called them freedom fighters.