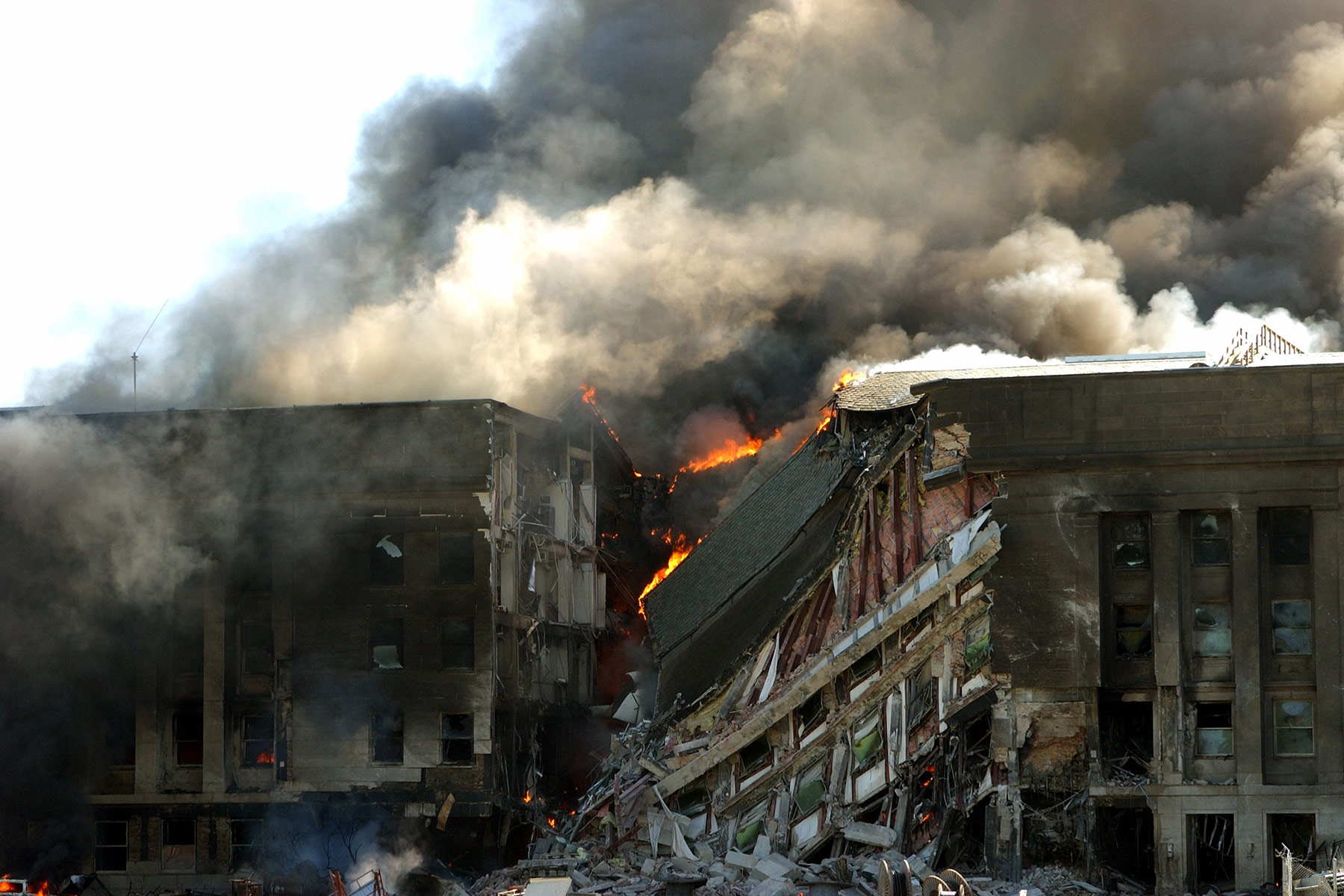 Those were heady days in the US stock market. I would wake up by 5 am and watch CNBC before the stock market opened for trading at 6:30 am Pacific time. It was no different on the morning of September 11, 2001. Little did I know that catastrophic things were about to happen that would change the world.

At 8:45 am Eastern time, an American Airlines flight had crashed into the north tower of the World Trade Center in New York City. Within minutes, CNBC stopped discussing stocks and started covering the incident, which, at that moment, no one knew if it was an anomalous accident or an attack of some kind.

Three minutes after 9 am Eastern, as I watched incredulously at the events unfolding, I saw a United Airlines passenger aircraft fly right into the south tower of the twin towers. In under an hour, the south tower collapsed, resulting in a massive cloud of dust and smoke. By now, there was no doubt that America was under attack.

“We will remember the moment the news came, where we were and what we were doing,” said President George W. Bush in an address to Congress on September 20. Images from that Tuesday morning are still etched in my memory, happening, as it were, just nine days after my second child was born.

In all, 2,996 people of 78 nationalities lost their lives in four coordinated attacks conducted by al-Qaeda using hijacked commercial, civilian airliners as their weapons, making 9/11 the second-biggest attack on American soil — second only to the genocidal assault on Native Americans committed by the nation’s immigrant settlers.

Addressing the nation the following day, Bush called the attacks “more than acts of terror. They were acts of war.” He promised that “the United States of America will use all our resources to conquer this enemy.” The president went on to assure Americans that this “battle will take time and resolve, but make no mistake about it, we will win.”

Twenty years later, the US has left Afghanistan and Iraq in a chaotic mess. The question remains: Did the United States win the war on terror the Bush administration launched in 2001? This was a war that has cost more than $6.4 trillion and over 801,000 lives, according to Watson Institute for International and Public Affairs at Brown University.

In October 2001, the US-led coalition invaded Afghanistan and overthrew the Taliban government that had harbored al-Qaeda. Soon after, al-Qaeda militants had been driven into hiding. Osama bin Laden, the mastermind behind the 9/11 attack and leader of al-Qaeda, was killed 10 years later in a raid conducted by US forces in Abbottabad, Pakistan.

In a shrewd move, Bush had left himself room to take down Iraq and its president, Saddam Hussein, using an overarching definition for the war on terror. In his address to Congress on September 20, Bush also stated: “Our war on terror begins with Al-Qaeda, but it does not end there. It will not end until every terrorist group of global reach has been found, stopped and defeated.”

True to his words, in 2003, the United States and its allies invaded Iraq under the premise that it possessed weapons of mass destruction. Bush settled his score with Hussein, ensuring he was captured, shamed and subsequently executed in 2006.

Despite reducing al-Qaeda to nothing and killing bin Laden, despite wrecking Iraq and having its leader executed, it is impossible to say that the US has won the war on terror. All that Washington has managed to do is to trade the Islamic State (IS) group that swept through Syria and Iraq in 2014 for al-Qaeda, giving a new identity to an old enemy. Following the US and NATO pullout from Afghanistan last month, the Taliban, whom America drove out of power in 2001, are back in the saddle. In fact, the Taliban’s recapture of Afghanistan has been so swift, so precise and so comprehensive that the international community is in a shock, questioning the timing and prudence of the withdrawal of troops.

Setting an expectation for how long the war or terror was likely to last, the secretary of defense under the Bush administration, Donald Rumsfeld, remarked in September 2001 that “it is not going to be over in five minutes or five months, it’ll take years.” Rumsfeld, who christened the campaign Operation Enduring Freedom, was prescient, as the war enters its third decade in a never-ending fight against terrorism.

The Winners and Losers

Ironically, Operation Enduring Freedom has only resulted in an enduring loss of American freedom, one step at a time. I still remember that I had walked up to the jet bridge and received my wife as she deplaned from a flight in 1991. Another time, when she was traveling to Boston from San Francisco, I was allowed to enter the aircraft and help her get settled with her luggage, along with our 1-year-old. It is inconceivable to be allowed to do such a thing today, and I would not be surprised if readers question the veracity of my personal experience. In many ways, al-Qaeda has succeeded in stripping Americans of the sense of freedom they have always enjoyed.

More than Americans, the biggest losers in this tragic war are Iraqis and Afghans, particularly the women. Afghan women, who had a brief respite from persecution under the Taliban’s strict Islamic laws and human rights abuses, are back to square one and justifiably terrified of their future under the new regime. The heart-wrenching scenes from Kabul airport of people trying to flee the country tell us about how Afghans view the quality of life under the Taliban and the uncertainty that the future holds.

To its east, the delicate balance of peace — if one could characterize the situation between India and Pakistan as peaceful — is likely to be put to the test as violence from Afghanistan spreads. To its north in Tajikistan, there isn’t much love lost between Tajiks and the Taliban. Tajikistan’s president, Emomali Rahmon, has refused to recognize the Taliban government, and Tajiks have promised to join anti-Taliban militia groups, paving the way for continued unrest and violence in Central Asia.

If History Could be Rewritten

In 2001, referring to Islamist terrorists, Bush asked the rhetorical question, “Why do they hate us?” He tried to answer it in a speech to Congress: “They hate what they see right here in this chamber: a democratically elected government. Their leaders are self-appointed. They hate our freedoms: our freedom of religion, our freedom of speech, our freedom to vote and assemble and disagree with each other.”

Islamic fundamentalists couldn’t give two hoots about a form of government or a people’s way of life thousands of miles away. The real answer to Bush’s question lies deeply buried in US foreign policy. America’s steadfast support of Israel and its refusal to recognize the state of Palestine is the number one reason for it to become the target of groups like al-Qaeda and IS.

America’s ill-conceived response to the Soviet invasion of Afghanistan in 1979 during the Cold War led to the creation of al-Qaeda. It was with US funds and support that the anti-Soviet mujahideen fought America’s proxy war with the Soviets. Without US interference, al-Qaeda may never have come into existence.

During the Iran-Iraq War of the 1980s, the US bolstered Saddam Hussein by backing his regime against the Iranians. When Hussein became too ambitious for America’s comfort and invaded Kuwait in 1990, George H.W. Bush engaged Iraq in the Persian Gulf War. The US motive at that time was primarily to protect its oil interests in Kuwait.

The US created its own nemesis in Saddam Hussein and Osama bin Laden and spent $6 trillion to kill them. In the process, US leaders have reduced Iraq and Afghanistan to shambles and created a new monster in the Islamic State.

Sadly, history can never be rewritten. The US has proved time and again that its involvement in the Middle East and Muslim world is aimed at advancing its own political interests. The only question that remains is: Can the US adopt a policy that would not aggravate the situation and, over time, deescalate it, without creating yet another Hussein or bin Laden? Without a radically different approach, Operation Enduring Freedom is doomed to endure forever, costing trillions of dollars each decade.