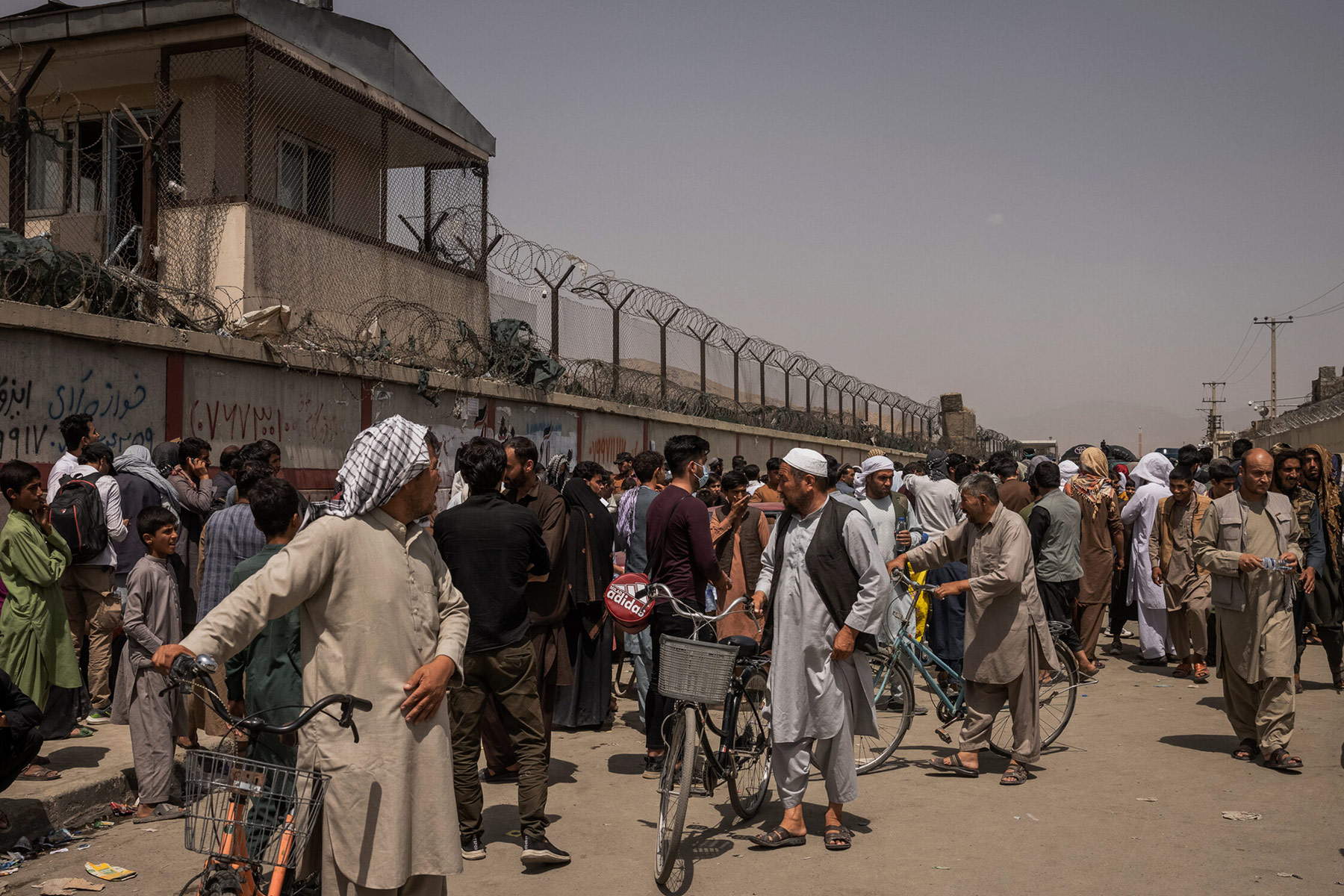 On August 15, Taliban militants entered the outskirts of Kabul, the capital of Afghanistan. It was the worst thing that could have happened to former Afghan employees of foreign institutions, women and civil rights defenders, religious and ethnic minorities, local journalists and even ordinary people.

Now, with the final withdrawal of US and NATO forces, nearly 38 million Afghans have been handed over to a group that has conducted suicide attacks, oppressed women and massacred minorities.

Afghanistan: A Final Nail in the Coffin of American Foreign Policy

Chaotically, people packed their bags and hurried to Kabul International Airport, apparently the only way left to get out of the country. Some did not even have visas and passports, without knowing their destination. The only thing they wanted was to get as far away from Afghanistan as possible. Some Afghans boarded planes, but others were unable to get on and desperately clung to an American aircraft that was about to take off. While some managed to safely arrive in other countries, others fell from the plane. This included a 19-year-old Afghan national footballer who lost his life.

In a matter of weeks, the Taliban have managed to dismantle an army built by the United States over the past two decades. Officially, the Afghan forces were at least four times the size of the Taliban and had greater combat capabilities. This failure was unpredictable for the Afghan people and anyone involved in Afghanistan. How is it possible for such a costly army to kneel before a relatively irregular terrorist group after receiving training from the world’s most powerful military?

Why Did the Afghan Army Kneel?

There are many possible reasons for this catastrophic defeat. This includes the lack of NATO air support for Afghan troops, low morale and faith in resisting the Taliban, widespread corruption in the army and among politicians, illegal deals and mass desertions. Reports indicate that some brigades and corps of the army had not fought a war against the Taliban in some provinces. This meant local forces who took up arms were on the front lines in key cities were without support from the Afghan army. Soldiers in the 209th Corps in Mazar-e-Sharif left their base without informing their allies. The local commanders in this strategic province later called the army’s withdrawal a betrayal and conspiracy.

Over the years, Afghanistan’s defense and security institutions have become increasingly corrupt and inefficient due to the interference of politicians. This is according to Munira Yousefzada, the former deputy defense minister. In an interview with BBC Persian, she claimed that decisions at all levels of the army were illegally taken from the Ministry of Defense and assigned to the office of Hamdullah Mohib, the national security adviser. These included critical decisions over war, intelligence, the appointment of officials, training and personnel matters. Therefore, “the Ministry of Defense had no role in the war,” she said, “and all commanders, from district commanders to commanders of corps, had to be close to Hamadullah Mohib.”

Ashraf Ghani, the now-former president, made the national army an incapable institution by unnecessarily dismissing and appointing personnel during his rule. The Afghan National Defense and Security Forces (ANDSF), as the military was officially known as, was not disintegrated by the Taliban, but by the mismanagement of Afghan politicians. Ghani used his position to marginalize non-Pashtun actors from the government. When the Taliban began their operation of seizing districts, large cities and then the capital, commanders of corps and divisions surrendered one after another without putting up a fight.

In an interview with Afghanistan International, General Yasin Zia, the head of the joint chiefs of staff in the Afghan government, said that Ghani had betrayed the soldiers by making wrong decisions and fleeing the country during a war. Mohammad Mohaqiq, the former security adviser, also told the broadcaster that the president was the main culprit in the defeat of ANDSF. For the past seven years, Mohaqiq said, Ghani was overwhelmed by the illusion of power, made wrong decisions and, upon witnessing Taliban fighters reaching Kabul, fled the country with $169 million in cash.

Ghani’s presidency will be remembered as one of the worst points in Afghan history. Thanks to his mismanagement and the crimes that took place during his rule, Afghans have accused Ghani of committing suspicious acts against national interests. His political opponents have long considered him as one of the biggest obstacles to peace.

In particular, the president did not back down when US politicians, almost all members of the Afghan High Peace Council and even Taliban leaders gathered in Qatar and called for an interim government. In early March, US Secretary of State Antony Blinken wrote a scathing letter to Ghani, saying the threats are too high and that a UN-led peace agreement with the Taliban should be signed. If this was not done, Blinken warned, the security situation in Afghanistan would spiral out of control. Shortly thereafter, several high-level US delegations, including Defense Secretary Lloyd J. Austin III, visited Afghanistan to speak to Ghani about reaching an agreement with the Taliban. The warnings went unheeded.

Can the Taliban be Trusted?

Since seizing power, the Taliban have announced a general amnesty for all people in Afghanistan, including employees of foreign institutions. According to this, everyone has immunity. As per Taliban leaders, women can return to work by observing Islamic law. Media outlets can also operate freely, as long as they follow Islamic principles. Nevertheless, it cannot simply be concluded that the Taliban are trustworthy. In the coming weeks, it will become clearer if they are tolerant toward women, minorities and activists.

In 1996, the Taliban announced an amnesty as they entered Kabul and took control of Afghanistan; they ruled the country until the US-led invasion in 2001. Yet soon after, the Taliban launched a retaliatory campaign. The worst crimes against humanity took place during the Taliban’s rule. In August 1998, thousands of Hazaras, an Afghan minority, were massacred in Mazar-e-Sharif. Pakistani writer Ahmed Rashid described the killing as “genocidal in its ferocity.”

Taliban leaders who have appeared in the media portray a more moderate regime. They speak of forming an inclusive government, tolerance toward minorities and respecting women’s rights. But this is far from the reality.

Taliban militants are still committed to the group’s core ideology. Their fighters follow extremist thought, such as the Deobandi school and jihadi Salafism, one of the most basic principles of which is intolerance toward other Islamic sects. There have been reports of jihadists from Pakistan and other countries fighting alongside the Taliban. According to the United Nations, there are between 8,000 and 10,000 foreign fighters in Afghanistan who are either affiliated with the Taliban, al-Qaeda or the Islamic State in Khurasan Province (IS-KP).

Afghans Are Left at the Mercy of the Taliban

The Taliban have so far worked closely with terrorist groups operating in Central Asia and South Asia. Needless to say, this cooperation is likely to continue in the future. The Taliban’s view of religious principles is at odds with human dignity and civil rights. In particular, the Taliban’s definition of women’s rights and freedom does not apply to Afghan society.

The group’s fighters have no faith in democracy and elections, and they are suspicious of women and minorities. Taliban leaders try to portray the group as tolerant in the media and talk about women’s rights to gain international support. In practice, their fighters on the ground believe that “women are mindless in general knowledge and religion.”

The Taliban do not have a development-oriented mindset. They do not have a plan or even skilled followers to govern, and they certainly cannot manage the country’s shattered economy. A Taliban government would presumably be accompanied by widespread opium cultivation, drug trafficking and human rights violations.

The theory that the Taliban have changed is just an illusion. The Taliban have already begun targeted house-to-house inspections searching for Afghans who worked with US and NATO forces. There are also reports indicating that people, despite a general amnesty, have been arbitrarily persecuted publicly. Four former Afghan commanders and a relative of a Deutsche Welle journalist have reportedly been killed by Taliban fighters.

The Taliban have not treated ethnic and religious minorities well either. Just one night after their takeover, the Taliban’s unbridled fighters destroyed a statue of Abdul Ali Mazari, a Hazara religious and national leader, in Bamiyan province where the Taliban demolished two 1,600-year-old Buddha statues in 2001. According to Amnesty International, the Taliban brutally massacred nine Hazaras in July this year after seizing the rural village of Mundarakht in the Malistan district of Ghazni province. Six of them were allegedly shot dead and three were tortured to death by Taliban fighters.

The Taliban have no suitable personnel and capacity to run a country, and their only means of maintaining power is carrying out large-scale violence and ruling through fear. Under the Taliban, media will be censored and civilians will be forced to live like people in the dark ages. With the Taliban taking power, poverty, violence and organized repression will rage in the country. During their rule, civil rights advocates have no chance of survival.

Afghan civilians have been left defenseless and helpless at the mercy of one of the world’s most notorious terrorist groups.