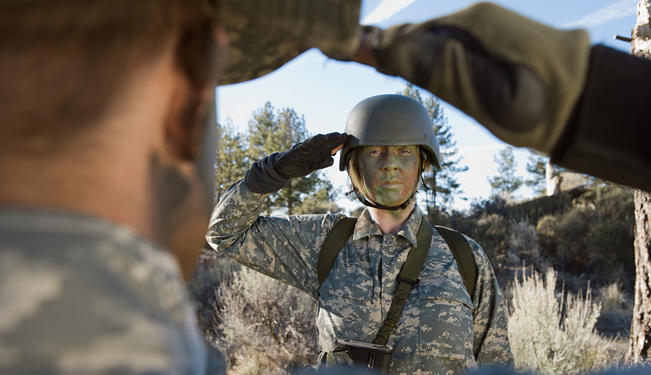 The root of the sexual assault crisis plaguing the military lies in militarism itself.

As more US military women break the silence about sexual violence committed by their comrades in arms, it is clear that sporadic “scandals” — at the Tailhook Naval Aviators’ Convention (1991), Aberdeen Proving Grounds Ordnance Center (1996), and the US Air Force Academy (2003) — are not isolated incidents, but spring from the mycelium of US military culture and ideology.

Victims’ testimonies, official complaints, lawsuits against the military, critical media reports, congressional hearings, and the 2012 award-winning documentary, The Invisible War, have pushed this issue into the spotlight.

In May 2013, an impatient commander-in-chief, Barack Obama, summoned military leaders to the White House, instructing them to get to the root of this problem. Over the years, the military has set up hotlines to hear victims’ complaints; initiated internal investigations, task forces, and trainings; changed protocols and regulations; and repeatedly declared a “zero-tolerance” policy.

So why does military sexual violence persist? One explanation offered by The Invisible War is that the US military includes a higher percentage of “sexual predators” than civilian society. Also, some military commanders not only tolerate sexual assault, they are also complicit in covering up these incidents, punishing victims, and exonerating perpetrators or, at most, giving them a “boys-will-be-boys” slap on the wrist.

A weakness of the current debate is its narrow focus on US military women. Cynthia Enloe, a leading feminist scholar of international relations, recently noted the importance of looking to “those who are pushed to the margins” in order to learn about the big picture.

To locate the root of the problem means looking beyond the assaults on US military women — appalling as they are — to the routine incidents of military violence against civilians in combat situations and outside the fences surrounding US bases overseas. Given their mission, soldiers are trained to kill. This means seeing “others” as foreign or less-than-human. Gender and masculinity are at play; so too are racism and national chauvinism.

Military Violence in the Asia-Pacific Region

Okinawan women have documented the history of rape by US troops in Okinawa (1945 to present). This research shows how sexual violence is a factor in contemporary tensions surrounding US basing agreements in Okinawa, South Korea, and the Philippines.

Militarized prostitution in the Asia-Pacific is alive and well. Bar areas near the bases are thriving, and US ships continue to make port calls in the Philippines and Thailand. In the past, Philippine women were called “little brown fucking machines powered by rice,” among other pejoratives: “Yankee whore,” “bar girl,” or “hostess,” reflecting US soldiers’ expectations that women would provide sex.

In 2005, Lance Corporal Daniel Smith was convicted of raping a Filipina identified as “Nicole,” near Subic Bay. The case was the first to test the extent of Philippine jurisdiction under the 1999 Visiting Forces Agreement with the United States. The district court convicted Smith, but the US military had him transferred from the local jail to the US embassy. He was later acquitted after Nicole issued a revised statement that cast doubt on her earlier testimony. Many feminists, including Task Force Subic Rape and the nationwide organization Gabriela, critiqued this case as a testament to the lopsided relations between the United States and the Philippines.

In 2011, in South Korea, a US soldier, “R”, broke into a woman’s home and raped her, only a month after another rape by “I” of an 18 year-old South Korean woman. Members of Okinawa Women Act Against Military Violence held a press conference to denounce the latest rape incident in 2012. The group was founded in 1995 after a 12-year-old girl was gang raped by three US servicemen. This incident sparked new opposition to US bases in Okinawa, drawing protests involving 85,000 people.

Reports of US military women raped or sexually assaulted by troops or contract personnel in Iraq have trickled into the American news over the years. Colonel Janis Karpinksi commented on the tragedy of several women who died of dehydration when they stopped drinking liquids after 3 or 4pm, because “they were afraid of being assaulted or even raped by male soldiers if they had to use the women’s latrine after dark.”

Nadje Sadig al-Ali, a professor of Gender Studies at the University of London, has noted that there are “many documented accounts of physical assaults on women at checkpoints and during house searches.” In 2006, six soldiers were accused of rape and murder in connection with the killing of a young Iraqi woman and her family, though the accusations did not lead to convictions. And in 2012, the Center for Research on Globalization reported an incident in which US Special Forces in Afghanistan were accused of raping Afghan women during a raid.

Sexual abuse and torture against Iraqi prisoners in Abu Ghraib prison introduced a grim new twist on this issue, in which race and nation trumped gender as white US women were deployed strategically to shame and humiliate Iraqi men. In this case, the power they wielded derived from their national affiliation as members of the US military — and from their whiteness — rather than their gender. A small minority in Abu Ghraib included female detainees who were raped and subjected to systematic abuse.

The liberation of Iraqi and Afghan women was widely touted by both George W. Bush and Tony Blair to justify military intervention in those countries. In the post-9/11 era, the West has defined itself as the rescuer, while depicting the Muslim world as backwards, uncivilized, or barbaric. Post-colonial feminist scholars in the United States were quick to point out these “gendered and racialized effects of nationalism.”

Linking the Domestic and International

In response to the crisis of military violence among co-workers, the US House Armed Services committee has proposed a measure to be included in the 2014 Defense Policy bill: “Anyone found guilty of rape, sexual assault, forcible sodomy, or the attempts of the aforementioned will lead to a punishment that includes, at a minimum, a dismissal from military service or a dishonorable discharge.” Although this is a step in the right direction, it overlooks the fact that most military victims of sexual violence do not report it, and that most accused of such crimes are not found guilty.

To get closer to the root of the problem, Congress and Pentagon officials should hear testimony from victims of US military sexual assault and their advocates in other nations. Although not all men rape or commit acts of violence against women, a clear pattern exists that goes beyond assaults of US military personnel.

President Obama and Secretary of Defense Chuck Hagel have both called for a change in military culture. Is this possible, given the mission of the military and the role it plays in US society? The military is still a male-dominated institution even though women now provide 15 percent of its “manpower.”

Like women in the US military, activists in the Asia-Pacific region critique the military culture of violence. Beyond this, their goals are often very different. Many US military women want to see stronger policies and enforcement regarding crimes of sexual violence in the military. Feminists in the Asia-Pacific region, and their counterparts in Iraq and Afghanistan, call for an end to US militarization and occupation of their countries.

The Philippine organization, Kaisa Ka, notes that the US military always does “its best to protect its soldiers from the laws of host countries.” They argue that solidarity amongst women in countries where US troops are permanently stationed is necessary to respond to these unequal relations. South Korean organizations have called for a change in the Status of Forces Agreements (SOFAs) governing the conduct of US troops overseas. They want to see greater powers for “host” nations regarding legal jurisdiction over US troops who commit crimes against civilians, as well as greater sovereignty for host governments and democratic rights for citizens. Okinawan women call for apologies to victims of sexual assault by US military authorities, punishment for perpetrators under Japanese laws, and the withdrawal of US troops from Okinawa.

Examining sexual violence in these different contexts — from the centers of the US military to the margins of occupied countries — makes it much more complex. The women who seek justice within the US military are part of a superpower with 1,000 bases overseas. A focus on domestic sexual violence makes invisible the fact that crimes within the military are tied to military practices in occupied countries (and vice versa). And as shown by women who live along the fenceline of military bases outside the United States, bases and routine maneuvers also destroy land, contaminate the environment, and distort local economies, alongside crimes of violence committed by US troops.

*[Note: Dr. Annie Isabel Fukushima received her PhD in Ethnic Studies with a designated emphasis in Women, Gender & Sexuality Studies at the University of California, Berkeley. Currently, she is an adjunct lecturer in Peace & Conflict Studies at the University of California, Berkeley. Dr. Gwyn Kirk is a scholar and activist focused on issues of gender, racial and environmental justice in the service of genuine security, peace-making, and creating a sustainable world. This article was originally published by Foreign Policy in Focus]