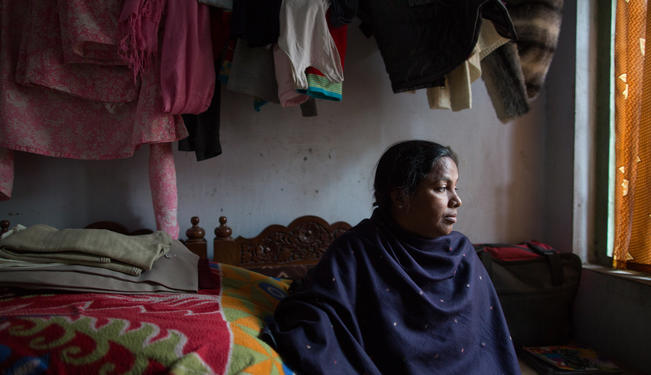 In Delhi, it is estimated that four rapes occur every day. [Click here to view the first photo feature.]

In January 2012, I had traveled to Delhi, India to document cases of dowry abuse. Just a month earlier, in December 2012, the brutal gang rape and murder of a young college student by six men in Delhi made international headlines.

As I followed the news and read more about the extent of physical abuse that women endure in India, I learned it was so ubiquitous.

With large demonstrations of men and women protesting to stop the rapes that occur all too often in India (in Delhi, it is estimated that four rapes occur every day), I was motivated to go back and report on other women who have been abused. Although this one case in Delhi received worldwide attention, I knew there were millions of women who have suffered in silence for many years without their story being told. I hoped that by doing this documentary work, momentum would be added to the efforts being made to curb physical violence against women.

Although my impressions and comments are about the subjects I photographed in India, the problem of physical and sexual abuse of women is pervasive throughout the world. In Mexico, when I attempted to carry out similar documentary work, I had no success. Women were too ashamed, perhaps because of the stigma, to tell their stories even though physical abuse was common.

It takes tremendous courage for these women to risk speaking out; to tell their stories and to be photographed.

Sometimes in the middle of the night, unable to sleep, I am haunted by the images and stories of the women that I have photographed in India. It was difficult to hear the narratives — imagining the beatings, physical abuse, the desperation and the suffering they survived, often in silence.

With little societal help, NGOs offered lifelines to these women through free legal advice, support groups, and counseling sessions to give them the psychological strength to reaffirm their basic human rights and self-worth. It is life-saving work, yet the psychological and physical damage from trauma can never be entirely undone.

There were certain basic themes that came out of these stories, the foremost being a lack of law enforcement. A woman who has the courage to report her case to the police, risks ridicule — or even further harassment. There was a story of a young woman who I did not have the opportunity to photograph; after being raped, she went to the police station where an officer sexually abused her.

Some stories, which were the most difficult for NGOs to resolve, saw women that were abused by their husbands who were members of the police force. Even if these cases do get filed in the judicial system, they languish in limbo for years and years as if time or justice were of no importance.

Unfortunately, sometimes women are also complicit in perpetrating violence towards other women. Many of these stories have mothers-in-law either condoning or actively participating in the violence.

Another sad theme that pervades these testimonials is that so many women who have been brutally victimized time and time again by their husbands, still hope for reconciliation and live with fantasies that everything would be fine if they could only move back one more time. Without the peer support of women’s groups in these NGOs, I fear many of these women would no longer be alive to tell their stories.

When I think of women, not only in India but throughout the world, who are vulnerable to physical and sexual abuse on a daily basis, I cannot help but think their condition is a contemporary form of slavery. They live in fear, shame and isolation, and have no legal recourse to defend their basic human rights.

I find it intolerable and applaud all the efforts of NGOs in India — in particular Action India, Humsafar and the Global Fund for Women — that provide grants to enable their work. These organizations provide vital psychological and legal support. They are doing difficult, commendable work, often going against accepted cultural norms, and I am grateful that they allowed me to document the stories of some of women they have helped.

Just as there was – still is – a moral imperative to end slavery, it is now critical to create an enforceable legal framework where physical abuse of women is categorically unacceptable.