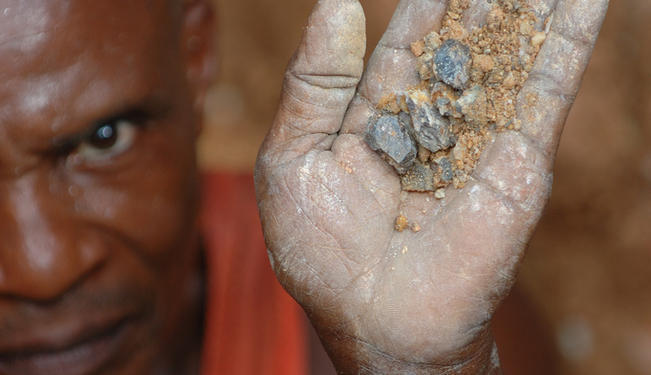 By Carol Mann and Alphonse Maindo

Legislation to regulate mining in the DRC may be a step in the right direction, but many problems remain.

The pervasive militarism, prevalent sexual violence and vast mineral wealth in the Democratic Republic of the Congo (DRC) are linked.

It was with this in mind that, on August 22, the Securities and Exchange Commission (SEC) – the body which regulates the securities industry and markets in the United States – adopted the Dodd-Frank Wall Street reform act. The act requires public companies to disclose whether minerals used in their products originate from the DRC or any adjoining country.

Expanding on the original law passed in 2010 and known in the DRC as the ‘Loi Obama’, companies must now take greater measures of due diligence and monitor every step of transactions to ensure transparency and accountability.

But while these measures are a step in the right direction, progress is slow, gaping loopholes remain, and the nexus between violence (in particular sexual violence) and the global economy remains insufficiently explored.

For decades, mineral smuggling has been a way of sponsoring guerrilla wars in the region, and the aim of the law is to ensure that all public companies trading in these commodities make sure that their business does not benefit warlords in the region, particularly in the eastern DRC.

One of the main drivers behind the legislation is widespread sexual violence and rape in the region.

In August 2009, US Secretary of State Hillary Clinton, for example, highlighted the link between armed conflict, sexual violence, and minerals when she visited eastern Congo, and Margot Wallstrom, the UN's special representative on sexual violence in conflict, famously referred to the DRC as “the rape capital of the world”.

Yet in many reports and in much work done on rape prevention, the economic background underpinnings of the region are rarely referenced.

Oxfam, for example, called on the Congolese government and the international community to “increase provision of medical care for survivors of sexual, violence, ensure that the protection provided by the UN peacekeepers and Congolese security services is tailored to local realities and to reform the Congolese security sector and justice system”. In a similar vein, UK Foreign Secretary William Hague’s commission aimed to tackle sexual violence by setting up a team of experts using the “skills of doctors, lawyers, police, psychologists, forensic specialists and experts in the care and protection of victims and witnesses”.

Such recommendations, although crucial and of value, do not take into consideration deeper dynamics. These proposals fail to address the fact that behind the warlords’ activities lies a complex political and economic situation in which global market interests are at stake. Additionally, it must be noted that, more often than not, companies do not have private armies and depend on local militias to access mines and even organise their exploitation.

In this context, mass rape has been used increasingly as a form of terror in mining zones, employed in ways to facilitate armed militias gaining access to and maintaining control over priceless resources. Indeed, prevalence of rape seems to be correlated to the presence of mines. According to Venantie Bisimwa, a women’s rights activist from Bukavu, “rape is the most economical form of violence against a community: families are instantaneously destroyed”.

A step in the right direction

To address this, industry has started trying to regulate the trade underlying the prevalence of sexual violence in the region. The International Tin Supply Chain Initiative (ITSCI) has been working on increasing transparency in accordance with Organisation for Economic Cooperation and Development’s (OECD) rulings and, according to the most recent Enough Project report, a number of companies have started to take measures limiting the use of conflict minerals.

The Frank-Dodd law originally came about as a result of campaigning by groups such as Human Rights Watch, the Enough Project and Global Witness, and since the passing of the law in 2010, companies with registered trading houses have officially adopted the appropriate due diligence measures. But the act has not been a silver bullet.

Chinese-owned businesses are not subject to the law and do not yet follow the Frank-Dodd requirements. To fully address the issue of conflict minerals, this blind spot will have to be examined. The act has also been criticised for placing the onus on companies and thus removing responsibility from the Congolese government even though corrupt government officials and groups linked to the Congolese army (FARDC) have played a significant part in controlling mines. Greater research into the identity of individual armed groups, their national and international partners and their mode of functioning would be necessary to make the law truly effective.

Other criticisms address the virtual embargo on minerals from the region that has followed the act, the gradual closing down of mines, and the loss of work for countless Congolese workmen and local communities.

Furthermore, there is evidence that mineral-smuggling from the DRC to Rwanda, Uganda and Burundi has increased. Rwanda, which has relatively few mines to speak of, is one the region’s main exporters, and exports from there have gone up since the application of the Dodd-Frank act. The Great Lakes region will be under great scrutiny following the reform act, but routes that send minerals to China and elsewhere will also require greater monitoring, especially as some companies are thought to employ circuitous routes through Asia where the components are made up.

While a promising start, the Dodd-Frank act has considerable practical shortcomings and insufficiently addresses the complex nexus of the global economy and local militarism, abuse and rape. Along with tackling these weaknesses, however, a number of other things are also urgently needed to complement industry efforts. Aid agencies, for example, must cooperate and coordinate to provide a holistic and coherent approach in the fight against sexual violence and the trade of conflict materials, while greater security must be ensured in the region. One preliminary step in this difficult and long-term task could be to map resource mines against cases of rape to see how and where they coincide, and to further highlight the link between the two.

*[This article was originally published by Think Africa Press on September 3, 2012.]