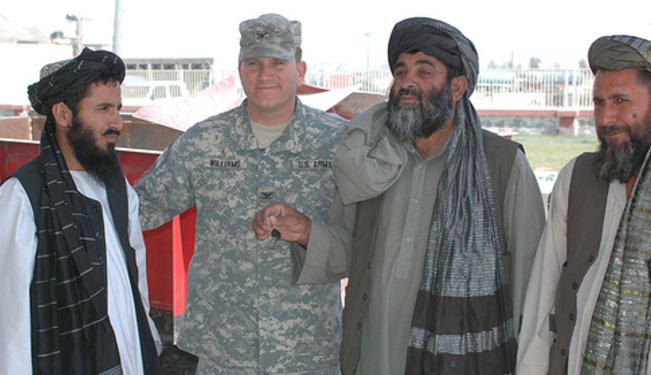 Grassroots movements are essential if the spread of Jihadi ideology is to be curbed.

On May 1st, 2011, President Barack Obama announced to the world the successful execution of Operation Neptune Spear and the death of the world’s most wanted terrorist: Osama bin Laden. The raid by SEAL Team 6 in Abbottabad represented the culmination of a decade long Herculean effort by the US military and Intelligence Community to “bring justice to our enemies.” While the face of al Qaeda, the head of the snake, the man responsible for the tragedy of 9/11 was dead, al Qaeda and its violent ideology lives on.

A year after the death of Osama bin Laden, the al Qaeda “core” in the Af/Pak border regions has been “decimated,” according to Vice President Joe Biden. However, the center of gravity for al Qaeda has long devolved to its regional affiliates, especially the Yemen-based al Qaeda in the Arabian Peninsula. AQAP has eclipsed its parent organization in conducting attacks against the United States, as indicated by their most recent attempt to blow up US airliners. Boko Haram of Nigeria, al Shabaab of Somalia, and the Hezbollah of Lebanon have all grown while the US has focused its efforts on securing and building Afghanistan.

The US for all its military prowess simply does not have the capacity to effectively pursue every terrorist organization on the planet that wishes it harm. If there is single lesson that can be extracted from our decade of persistent conflict, it is that terrorism is only a strategy, not an enemy itself that can be destroyed. Individual terrorists can be killed or captured, networks can be disrupted and supporting infrastructure dismantled. However, terrorism itself cannot be destroyed in the same sense that organized crime cannot be destroyed. It is simply a means to achieve an end that is utilized by a litany of groups, ideologies and individuals. It can be interdicted and mitigated but never truly extinguished. Therefore, it is necessary to develop not a counterterrorism strategy, but rather a strategy to counter and nullify the violent extremist ideology of the Jihadis. This grassroots solution would eliminate permissive safe havens and degrade the movement as a whole. If their firebrand ideology can be contained, it will deny the movements new fuel sources and will naturally lead them to burn out.

Vital to this strategy is the proper strategic awareness to identify friend and foe. Misplacement of blame and unseemly relationships, risk provoking neutral actors and undermining avenues for cooperation, and may feed adverse ideologies rather than ameliorate them. The monolithic strategy set forth by the Bush administration in his 2002 State of the Union address labeled every Islamic extremist group and their corresponding state supporters as an enemy of the United States. This strategy led the US to make alliances of convenience with brutal dictatorships in places such as Egypt and Pakistan, which were embroiled with their own brands of Islamic extremists. The massive financial and military support provided to the regimes of Hosni Mubarak and General Pervez Musharraf served to enrage the local populace and became propaganda for the Jihadists. The 2003 invasion of Iraq played directly into the narrative of al Qaeda who used it as evidence of the US’ intent to conquer and destroy the Muslim Ummah. These unilateral actions enable al Qaeda to control the narrative and posture themselves as defenders of their fellow Muslims against the crusading infidels, further spreading the violent ideology.

This phenomenon of viral extremism is best described in four phases, as presented by counterinsurgency expert David Kilcullen. In the first stage, al Qaeda for example, infiltrates a desolate, usually war torn region to set up a safe haven. They then use this as a base of operation to spread their ideology and conduct attacks. When a foreign power intervenes to destroy the safe haven, the local population defends the militants who have become an integral part of the village or tribe. The outside power then targets both the local “accidental guerrillas” along with the hardened extremists indiscriminately thus “burn the haystack to find the needle.” “Target centric” counterterrorism strategies such as drone strikes and Special Operation night raids play directly into this cycle of the “accidental guerrillas.” Every mistake made by US and coalition forces alienates the local population and provides new populations for Jihadi groups to prey upon, thus perpetuating the cycle.

Al Qaeda and other Jihadis are, in fact, natural pariahs amongst their fellow Muslims for their “takfiri” or heretical ideology and their disregard for tribal customs. Successfully countering violent extremism depends upon empowering the local population to break the cycle and throw off the ideological shackles of the Jihadis. This revolt must come genuinely from within the society to prevent it from being portrayed as an infidel sponsored puppet show.

The Jihadis (and Salafis) believe that they practice the “true, pure, and unadulterated” form of Islam, and actively work to spread their beliefs. This superiority complex causes conflict with local tribal populations when they attempt to force themselves and their beliefs onto the local population in violation of tribal custom. The Summer 2007 Anbar awakening typifies the effects of this natural tension. In these episodes, the al-Qaeda commander of the Al-Anbar Province demanded the daughter of the chieftain’s hand in marriage. The chief refused, citing tribal customs forbidding extra-tribal intermarriage. The enraged al Qaeda commander killed the tribal chief thus sparking conflict between al Qaeda and their former Sunni tribal allies. The tribes expelled al Qaeda from their former safe haven that summer in the “Anbar Awakening,” a feat which the entire US and coalition force in Iraq had been unable to accomplish in four years.

The wider empowerment of the Ummah against Jihadi extremists can take many forms, but it must at a fundamental level address the needs and grievances of the population so that the Jihadis do not have a void to fill. In this vein, the Provincial Reconstruction Team model currently used in Afghanistan places US forces directly in contact with the civilian population as they work together to build infrastructure. This model familiarizes the US forces with their civilian constituents thus facilitating recognition of foreign insurgents. The Afghans are also provided with the opportunity to have a direct stake in shaping their future and are protected from the Taliban and al Qaeda. The PRT model can be universalized to a broader doctrine that can defend vulnerable populations from falling prey to infiltration and radicalization.

For those who have already been indoctrinated but who are not ardent extremists, de-radicalization is the next component in the strategy to Counter Violent Extremism. A de-radicalization program rehabilitates militants into mainstream productive members of society. It counters violent extremism at the micro level by mitigating and reversing infectious extremist beliefs. A flagship program in Saudi Arabia has achieved a 90% success rate in reforming Jihadis by providing their “clients” with job placement assistance, religious instruction, and even matchmaking services. This type of program was instituted on a much grander scale at the Parwan Detention Facility at Bagram AFB in 2009 under then-General Stanley McChrystal. The target audience is limited to Jihadis who joined out of desperation or more superficial ideological factors and are not hardline extremists. The true believers however, will never cease in their jihad against the infidel, which leaves only kinetic solutions available for this small minority.

The popular uprisings throughout the Arab Spring represent what could be a serious blow to al Qaeda and their allies. The Muslim Ummah has thrown off the tyrants of their day without the help of al Qaeda’s explosives or ideology. These popular uprisings demonstrated to a large degree, al Qaeda’s irrelevance to the Muslim world’s post-colonial struggles – a realization that deeply troubled Osama bin Laden in his final days. It is this type of grassroots public uprising that has the potential to usurp the narrative of al Qaeda and give the Arab World something new to believe in. It is precisely these types of movements that the US should embrace and support, for from only within the Ummah itself can violent extremism be effectively countered.
The views expressed in this article are the author's own and do not necessarily reflect Fair Observer’s editorial policy.