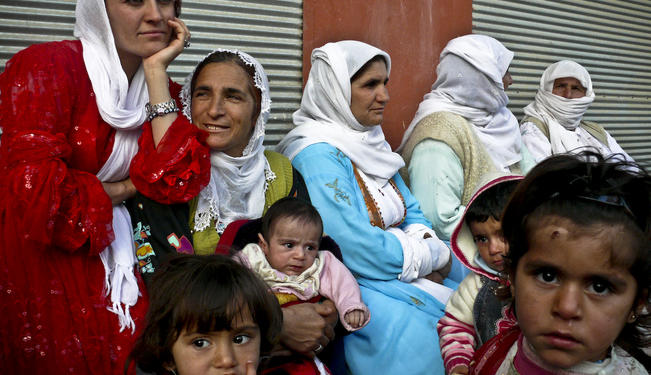 Failure to enforce law correctly hinders the protection of women in Iraq.

Iraq has always been a country of both national and international upheavals. The frequent political changes have made Iraqis doubtful of their status, especially women. Time and again they were left homeless and in panic. They have endured the loss of dear ones, loss of a stable home, loss of their "self," and consequently loss of their identity.

Saddam Hussein’s reign witnessed major conflicts, including the eight-year-long Iran-Iraq War and the first Persian Gulf War. In 2003, the former ruler was deposed following the US-led invasion of the country. Ever since, the security situation has been very precarious with violence peaking in 2006 and 2007 and again in recent months.

During times of war, women are arguably the ones who are most affected by its trauma. Over the years, Iraq has become a battleground of death — sometimes caused by Americans, sometimes by other invaders or rivals like Iran, and sometimes due to internal political struggles.

As reported by The Guardian in 2007, there have been instances where dead women flooded hospitals but no one dared reveal their cause of death; these voices were silenced. They were said to have died in an "accident" when someone came to claim their bodies. Even today, sometimes they are unclaimed and rot away, unidentified.

The brutality of war and its effects upon Iraqi citizens are exemplified by a description of the Sulaimaniyah Hospital in Iraqi Kurdistan. In its morgue, many female corpses could be found. The deaths came from a variety of causes: shooting, strangling, beatings and burning.

The face of a young woman in the Sulaimaniyah morgue clearly demonstrates the lack of humanity of these acts, her face contorted in a look of surprise even in death. As the manager of a women’s shelter testified, these ladies were probably burnt by their own families.

Iraq is in a situation of cultural and political anarchy. Local culture uses religion as a tool to impose a certain way of life on people, and the existing regime adopts and implements rules that serve the interests of the political elite. A general climate of lawlessness persists. “At home a woman faces violence from her father, brother, husband and even from her son,” said Shameran Marugi, head of the non-governmental organization Iraqi Women’s Committee.

Women encounter verbal abuse and sometimes abduction if they are not wearing a hijab, the traditional Muslim headscarf. They also suffer from exploitation like trafficking and sexual slavery. Some Iraqi women still face genital mutilation — in contravention to the law which criminalized Female Genital Mutilation in 2011. Women who are thrown into prostitution are treated like criminals themselves. Even in detention, women face sexual and physical abuse.

The Right To Live

Earlier, in large parts of the country, Iraqi women were only able to move around while accompanied by a male escort. This situation has not changed much. There have been cases where rape was committed by these escorts and other armed groups. Some of these groups had direct links with the Iraqi government, while victims were thereafter killed. In small towns and villages, a woman cannot seek medical advice without the permission of a male authority in her family; if she needs to consult a doctor, a male escort is a requirement.

Social norms prevent women from going out alone because of their vulnerability to robbery, rape and murder. This makes war widows high-risk victims who often suffer from sexual assault and abuse.

Moreover, it has become normal for Iraqi women to receive death threats for working as hairdressers or tailors or for not wearing a hijab or not dressing "decently." Marugi explained further: "In addition to equal rights we are now demanding the 'right to live.'"

Iraqi women have been murdered in unprecedented numbers since 2007, marking the post-execution period of Saddam Hussein. Cases of honor killings have increased over the course of time in Iraq. In Iraqi Kurdistan, 255 women were killed in the first six months of 2007 — three-quarters of them were burnt to death. When questioned, Iraqi doctors told UN investigators that most of these burnings were self-inflicted. One judicial investigator in Erbil affirmed: "The woman is unhappy, or there is domestic abuse, but the family doesn't listen. So she does it because she wants to draw attention to herself."

Further reports point to a continuity of these patterns. The KRG Ministry of Interior stated that during 2010, "76 women in the region were killed or committed suicide, while 330 were burned or self-immolated." A 2010 report from the Iraqi Ministry of Human Rights reported 249 murders of women, including honor crimes. In Kirkuk, 62 women died of burns in 2011; amongst them, 20 were victims of explosions but the remaining 42 contributed to the high rate of suicide among women.

The latest UNAMI (United Nations Assistance Mission for Iraq) report from June 2013 records that from July to December 2012, there were 237 cases of physical abuse of women. Apart from that, 87 cases of sexual abuse were reported. Moreover, there were 153 burn cases, of which 50 resulted in death.

The issues for which women are most penalized are alleged adultery or for having relationships with men prior to marriage. Therefore, in order to restore their "honor," these women are killed by their brothers, husbands and other male relatives. In most cases, these acts are carried out in utmost secrecy with the bodies of girls being dumped miles away. If the body is found, in some cases, the family would completely deny having a daughter.

The UNAMI report June 2013 itself summarizes:

"Law continues to permit ‘honor’ as a mitigating factor in crimes of violence committed against women and family members. There is still no effective system of shelters and coordinated care for the victims of domestic violence, and services available to victims remain inadequate."

The US Invasion and Women’s Rights

In March 2004, George W. Bush said: "The advance of freedom in the Middle East has given new rights and new hopes to women… the systematic use of rape by Saddam's former regime to dishonor families has ended." This gives an impression to the world that the American and British invasion of Iraq in 2003 helped improve the conditions of women in the country. But this is not the case.

In Afghanistan, where the US also adopted the rhetoric of empowering women, the Taliban were criticized in a statement from Amnesty International officials for its "systemic torture and abuse of women." In contrast to this, Alex Arriago, director of government relations for Amnesty International USA argues: "In fact, there are even more documented cases of women raped by members of the Northern Alliance than there are by the Taliban." The Northern Alliance was allied with the Western forces during Operation Enduring Freedom.

Even during Saddam Hussein’s oppressive rule, women in Iraq were recognized as one of the most liberated in the Middle East, having held important positions in education, politics and business. Their rights were protected by a statutory family law which made female activists of other countries envious of Iraqi women’s relatively advanced status. Women still compare the post-invasion trauma to their life under the former regime.

A woman, when interviewed by activist Zainab Salbi, stated:

The situation was relatively favorable for women until the 2003 invasion, but the developments which took 50 years to unravel have now disintegrated. Marugi argues: "Before the 2003 invasion, it was possible for a woman to lead a normal life as long as she followed state policy… It was even possible for a woman to engage in political and economic activities through the official Union of Iraqi Women.” After the invasion, the Union was dismantled because of its affiliation with Saddam Hussein’s former Ba'ath Party.

Iraqi women still face violence in every part of the country. On October 30, 2013, unknown gunmen fired on three women, ranging between 20 to 30 years of age. Similarly, on July 10, women were killed in three different incidents — again by unknown gunmen.

The deterioration in the lives of Iraqi women has been caused by the political instability of war, which has often resulted in the deaths of family breadwinners. To bring up their children, Iraqi women sometimes have to resort to measures like prostitution which results in crimes such as sex trafficking. They cannot get good jobs due to their lack of education. Thus, women are marginalized and cannot contribute economically, socially and politically to Iraqi society.

Rules and laws do exist but their implementation is poor in Iraq today. Women like Marugi are fighting for their rights — one of these is the "right to live."

Education can be the key to the institutionalization of women’s rights against these violations and oppression. A UN Iraq report recorded that 40.8% of Iraqi women fail to complete their education due to their family's refusal, 13.1% because of early marriage, and 4.2% for security reasons. This leads to a poor stature of education as the survey of Women for Women International found that 57.5% can only read and write their names.

Apart from education, Iraqi women need to be financially independent so they can at least fight back with their earnings. Women for Women International surveyed that 90% of women in Iraq are not engaged in productive work, highlighting the importance of helping them find employment.

There are many other ways in which women can help themselves apart from education and work. Being politically active can be a significant means for liberation. Lack of proper leadership in Iraq is one of the main reasons for the deteriorated conditions of Iraqis. Female leaders can be helpful in overcoming these atrocities.

Nobody knows how many Iraqi women will be able to take initiative like activists Zainab Salbi and Yanar Mohammed have. Hopefully one day, the women of not only Iraq but of the whole world will be free from wars and bars — wars created by politics and the bars imposed by society and the imposition of religion.