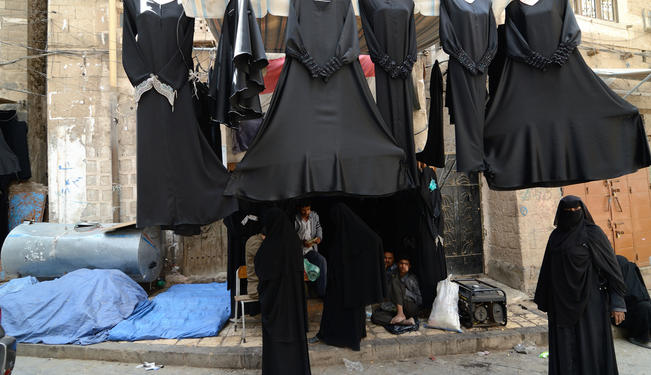 The issue of women's rights does not only concern women, but the whole of Yemeni society.

Benjamin Wiacek speaks to Alaa Al-Eryani, a Yemeni women’s rights activist, who launched a page on Facebook dedicated to the Yemeni Feminist Movement. She talks to Wiacek about her initiative and dedication, and shares her insights on the situation of women in Yemen.

Benjamin Wiacek: What is the Yemeni Feminist Movement?

Alaa Al-Eryani: It is an intellectual movement that focuses on women’s rights and aims to improve the status of women in Yemen through promoting gender equality and opposing discrimination. This is addressed to everyone: women who are in denial and need awareness, but also people already interested in these issues and who wish to be more active.

Wiacek: Why is the issue of women’s rights important in Yemen?

Al-Eryani: Women are living in a society where, unfortunately, both men and women believe that women are inferior to men. They have no role other than taking care of the house and reproduction. This is mostly due to high illiteracy rates and our strong traditions.

However, women represent half of the society. In fact, they are the half that brings up the other half. So, if women are not getting their full rights and are not contributing to the society’s growth, then how can we expect the country to develop?

I believe that each and every individual, women and men, should contribute in building our country; and if women are still objectified, looked at as half citizens and not able to contribute in the society, then we will never be able to develop Yemen.

Wiacek: What pushed you to focus on this subject?

Al-Eryani: I have always hated the patriarchal traditions and standards which made me feel that I am invaluable to the society and not in control of my own life. But it was only last year that I finally woke up, said “enough is enough,” and made the decision to get a divorce. That changed my whole life and drove me to fight for my rights as a woman.

I got married right after I finished high school. By being too young for that responsibility and by having to follow all those traditions which restricted me from being who I am, I went through a very hard time. At the beginning, getting a divorce was not even an option for me: I was worried by my family’s reaction and by facing the whole society that has a negative view on divorced women.

Last year, after four and a half years of marriage, I was finally brave enough to stand up for myself and get a divorce. I believe that if I had just accepted my situation and lived with it like many women do, I would not have had the chance to be as happy and content as I am today.

And so, I have decided that I will try my best to help other women in unjust situations to get the same chance I did, to speak up, and to refuse to live any life in which they do not feel they are treated as full human beings and full citizens.

Wiacek: What is your objective with the Yemeni Feminist Movement?

Al-Eryani: With this initiative I hope to create a media for women, a platform for them to express their concerns, their demands, and a space for discussion on the possible ways of action and solutions.

I started this by myself because I knew other people who were interested, but no one was really motivated to do something. Hopefully, I will soon be able to start a partnership with other similar groups.

Wiacek: For now, your initiative only consists of a Facebook page. How do you think social media might help women, since most of them are illiterate and do not have access to Internet?

Al-Eryani: The issue of women's rights does not only concern women, but the whole society. I think social media can be of great help to start this movement and get the attention of educated people who do use social media, including decision-makers and personalities that have great influence on the Yemeni people. But the plan is to eventually bring the movement to life and expand it into something much bigger.

Wiacek: Are you planning to organize any activities or campaigns in order to realize your goals?

Al-Eryani: The first thing I want to do is set up a membership form so people can actually join the movement and participate. In future, I would maybe like to open an NGO, in order to expand the project so it is not only on Facebook — so it can reach as many Yemenis as possible, both men and women.

I want to organize workshops, training, awareness sessions, and so on — first in Sana’a and then throughout the country. We have no financial support but I want to see what we can do without it. If necessary, we will of course look for some support.

Wiacek: What have been the reactions so far?

Al-Eryani: I have received much more negative reactions than positive ones. I have been accused of wanting to destroy Yemeni girls; I was told that they are conservative and that I am trying to take them away from religion and traditions. These people believe it is not allowed for women to ask for their rights. I also received some threats and my Facebook account was hacked. It made me a little scared, but I am now more motivated than ever.

Fortunately, I have some support. More than 2,500 people liked the page on Facebook in less than a month, and some girls contacted me saying they loved the concept and that it was a good idea for women.

Wiacek: What about your parents or relatives?

Al-Eryani: My parents and most of my relatives are very supportive of what I am doing. I do have some relatives who are a bit angry — not of the page specifically, but of my work as a women’s rights activist in general.

My mother is the best supporter of all; she is the one who pushed me and encouraged me to open this page when the idea came into my mind. I am very grateful to have her by my side.

Wiacek: What do you think of people saying that feminism is something negative?

Al-Eryani: Many people do not really understand what feminism is. I am disappointed to see them thinking it is bad, sexist, and only driven by hatred towards men. That is not true at all. Feminism is simply about fighting for equal political, economic, and social rights for women.

That is why I am also planning to use this page to raise awareness about what feminism really is and what it stands for.

Wiacek: Are there any men involved in the movement?

Al-Eryani: I have a couple of male friends who are helping me. Many liked the page, but they did not reach out yet. Most men would not support our movement. I think they are afraid of women being more powerful, independent, and speaking out.

Wiacek: To conclude, do you have a message you want to share?

Al-Eryani: To all the men against us, I say: no matter how much you try, we will not stop.

*[This article was originally published by La Voix du Yemen.]