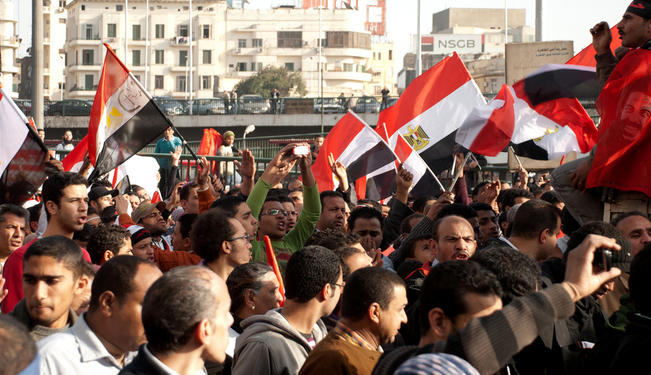 Secular and Islamist discourse in Egypt share a core essence of masculine dominance.

Egypt and the wider Middle East are undergoing major change following revolutions. But what is the best way to plan for and navigate the future?

A number of post-Arab Spring political and strategic analyses have managed to move beyond a focus on the state to identify trends in order to propose solutions. Among the significant trends, changes can be seen within ideology — which is borne not merely at the state but also at the grassroots level.

But the attention given to what can be leveraged or rather contained is misplaced. Some of these works are pointing to the grassroots level but are superficially fixated on ideology.

The quick conclusion often drawn is the inevitable end of the Muslim Brotherhood. Despite the acknowledgement of lower-level politics and ideological leanings in the shaping of the state, indeed, one pivotal aspect of this political configuration is virtually absent: gender.

Leaving gender out of a discussion on ideology and its impact on the future is of enormous consequence. Whether we speak of an Islamist discourse or that emanating from the secular stream, especially in the post-revolution Middle Eastern countries, there are virtually no creative solutions for diplomatic intervention or real steps towards building trust between those of all ideological stances and thus fostering reconciliation.

Brute force, obstinate stances, and the squashing of women’s and minority rights were part and parcel of the Muslim Brotherhood-led government and also the current military rulers in Egypt.

What we have is that although critique has included ideology — to be precise, Islamist ideology beyond the state level — the larger discourse driving this critique is mainly about secularism vs Islamism. The persistent obsession with this ideological split blinds to the fact that both standpoints share a core essence of masculine dominance. With this current essence comes rivalry, mistrust and, significantly, violence.

Women’s oppression is due to a shared ideology on the role and position of the female gender. Islamist politics cannot be singled out as the only arena for the oppression of minorities and women.

It is this shared essence — rooted in the individual’s ethics and consciousness that is going to determine how the masculine or feminine essence will be expressed in home life — in shaping societal norms, laws related to women, human rights or the lack thereof, and the core essence of state politics.

More than an Imbalance in Numbers

This is important to highlight. Women are sorely underrepresented in positions of power and decision-making. However, when the gender aspect is marginalized, the consequence is not that of an imbalance in numbers.

Critically, we witness an imbalance in and distortion of a crucial essence for true transformation. Ideological positions are irrelevant; they are superficially understood. Their essence or what directs discourse on choices and capacities for civility and peace is core.

Women tend to — though not always — produce the critical feminine voice that must account for half of all the ideas, plans, aspirations and insights expressed. That includes the prioritizations around children’s needs, women’s access, diplomacy, peace, and the innate drive for renewal and restoration.

Indeed, men can and sometimes do produce that greatly needed feminine aspect more aptly than women. In my interviews with men leading up to, during and following the Arab Spring in Egypt, I gained insight into the ability of many men to imbue their activism and politics with both feminine and masculine aspects appropriately and in complementarity to produce actions, for example, of compassion; yet, necessarily assertively so.

However, in my personal interaction, interviews and observations, I gained a strong sense that the masculine essence was so distorted and in such form so aggressively dominant that women’s voices around agendas, such as addressing women’s rights or getting their children’s needs protected through appropriate policies, more often become suppressed.

Tactics include not only marginalizing women from "hard" politics in numbers, but also using laws to discriminate against them. They include banning the wife or daughter from educational endeavors of her choice or sometimes in various ways from having her own income.

Indeed, I learned about the various tactics so many women experience from their home life to public life that disable them from fully contributing their passionately felt ideas and capacities. Very recently, I witnessed an Egyptian husband abruptly stop his wife at the dinner table from speaking, reminding her that she is not allowed to speak about politics, as he continued to do so. And in the scheme of it all, that was not an extraordinary event.

The Feminine and Transformation

I also learned from many female, Egyptian activists how important they knew their feminine aspects were to transformation. For example, women expressed that the most important aspect in dealing with people of different ideological orientations and thinking that has been critical to their struggles during the Arab Spring and today, is patience.

Various forms of an inner capacity to tolerate, cooperate, reciprocate and trust were expressed and observed. Such are the core ingredients for civility to grow and civil society to be sustainable — the bedrock for successful transformation. But how many of us will acknowledge that seemingly apolitical forms of interaction in the home and in civil society organizations are absolutely critical to the future of the Middle East?

There is absolutely no other way of moving forward from a consciousness of mistrust, polarization and fear without a capacity to be civil, which is imbued by what I have experienced as largely feminine capacities for compassion, tolerance, forgiveness, receptivity, trust, empowerment, and patience.

Although men can and must contribute to a transformation through such aspects, too, and women do not always live up to any such nurturing, creative or reciprocating role, the torch of the feminine must be carried forward firstly by women.

The majority of NGOs that I entered and studied were mostly populated by women. What is needed, at this point, is that the pivotal actors behind a future transition to peace and prosperity in the Middle East are recognized and embraced for their most essential capacities at the state level, in the judiciary, in strategic planning, and the various projects and initiatives for democratic development.