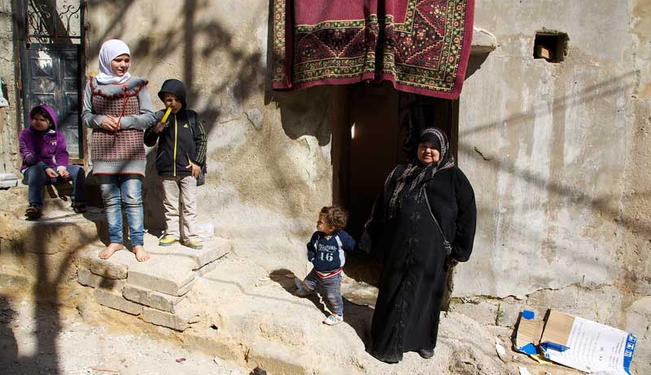 If Jordanian women marry non-Jordanians, they are only granted “services rights.”

Last December, the spokesman for the Jordanian government, Mohammed al-Moumani, announced that the government will not grant civil rights to Jordanian women married to non-Jordanian citizens. Instead, he said: “Jordanian women will be accorded services rights.”

His explanation was “to prevent giving political rights [or Jordanian citizenship] to the children of Jordanian women who are married to non-citizens. This issue,” he added, “is a sovereign issue.”

The government’s position is echoed by the former chief of the Royal Court, Reyad Jameel Abu Karaki, who told me from Amman that Jordan should not pay for the choices those women have made. “Why should we pay for schooling, health care or feeding those children when we barely can do that for our own citizens?”

In fact, Abu Karaki who left his position nine months ago, was one of the most powerful men in Jordan, second only to the king. The retired army major general thinks that the governments of the husbands’ nationality should instead be responsible for those children.

“Why we should feed and teach these children?” he asked rhetorically. As for what should happen to them instead, he said: “We should throw them at the embassies’ gates so their governments [government of the husbands’ nationality] take care of them.”

Several news sources in Jordan report there are currently over 80,000 Jordanian women who are married to non-Jordanians. According to those sources which quoted the ministry of interior, the “Palestinian nationality” is the largest foreign “nationality” with over 50,000 cases of marriage followed by Egyptian, Syrian, Iraqi, Saudi and American with few thousands each.

The term “Palestinian nationality” is ambiguous since most Palestinians are from the West Bank and carry a Palestinian passport, and those who marry Jordanian women tend to take their wives with them to their towns in the Palestinian territories.

Therefore, the term most likely and inaccurately refers to Palestinians from Gaza who live in Jordan as “resident aliens” and hold neither Palestinian nationality, nor a Jordanian one, but rather an Egyptian travel document that does not designate nationality.

When I asked Abu Karaki if his argument is applied to Gazans who have been residing in Jordan for generations and practically have nowhere to go, he said that he is not against them per se or against Palestinians in general, but “when you do the math, it does not add up.”

He continued: “Granting citizenship to the children of those women, we will have 350,000 citizens [mostly Palestinians] which Jordan doesn’t need or want. We are a country of only about 6 million people. Adding such numbers is huge for us.”

Yet when I asked him what should be done with people from Gaza who already live in Jordan, he said: “They should go back to Gaza or maybe to Egypt.”

Moreover, Abu Karaki was in essence making the political argument that 350,000 new citizens of non-East Bank Jordanian origins will upset the political equation in Jordan. To prove his point, he used the example of the southern governorate and city of Ma’an, which has a population of 120,000 and commands four representatives in parliament. “If we grant political rights to those people, they will in the future demand political representation in the parliament.”

Although from an economic perspective, adding 350,000 new citizens will, in the long-run, increase the country’s human capital, economic output, consumption and investment.

But the economic argument is beside the point for the proponents of Abu Karaki’s views.

The heart of the matter for Jordanian women, hence, is that they are caught in the middle of a very combustible issue in the country, which is the relation between its two major national groups: Jordanians and Palestinians.

Abu Karaki is advancing the view that the ultimate political power in the country should rest with those of East Bank origins, with some token exceptions given to those of Palestinian origins.

In fact, this has been the Jordanian government state policy for decades which was designed to allow a major segment of its citizens, Palestinians, to become the economic engine of the country who produce most of its national economic output, while leaving political power in the hands of its East Bank citizens.

This unconstitutional and informal arrangement in essence leaves Jordan’s survival as an independent country in the hands of its foreign benefactors and donors, mainly the United States and Saudi Arabia, not its citizens.

When I asked Abu Karaki if he worries that his views might be understood as racist or derogatory, he said: “I don’t care, I am not running for a parliament anytime soon.”