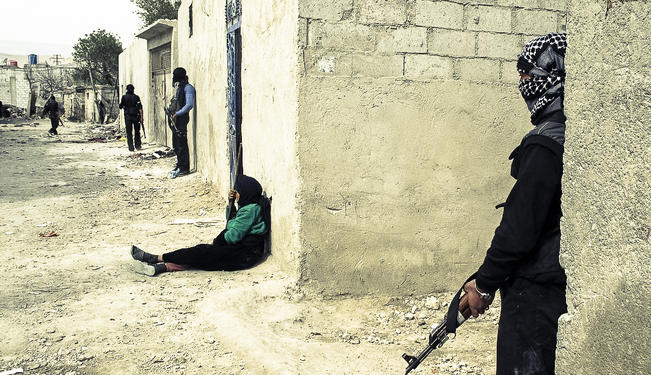 Sunni fighters in Lebanon’s Tripoli are becoming increasingly inspired by the organization of Syrian armed groups, and are seeking to build their own incipient combative organizations to defeat their Alawite “near enemies” in the city.

Tripoli’s street battles are once again the center of international attention. In the last two weeks, sectarian-inspired fighting between the Alawite community of Jebel Mohsen and the Sunni neighborhoods of Bab al-Tabbaneh, Ibbe, Abi Samra, al-Mankoubin, and Beddawi, has led to the deaths of 17 people and wounded almost a hundred. These battles, another in a series of street wars between Tripoli’s heavily impoverished northern districts, are becoming increasingly inspired by the example of the Syrian Civil War.

Tensions on both sides of the firing-line, Alawite and Sunni, are inflamed by each community’s increasing sense that this battle, for control of Tripoli, is an existential conflict that they both must engage in. In spite of the best efforts of the Lebanese military, which now patrols and operates checkpoints throughout Tripoli, neighborhood combat between these two sectarian groups in this forlorn corner of the city has not abated. As a result, serious questions are now being raised about the ability of the Lebanese military to halt the violence for any extended period of time.

The Lebanese military is already stretched thin all over Lebanon to keep the peace along other simmering sectarian fault-lines in Beirut, the southern city of Saida, and in the eastern Biqa’ Valley. The military is also tasked with patrolling and interdicting human, weapon, and drug smuggling in the northern Akkar and the Biqa’. Tripoli’s conflict, long-boiling before the start of the Syrian conflict, is now intractably linked to the war waging in Syria. Syrian armed opposition forces are also using Lebanon, especially Tripoli, as a base of strategic depth for military action in Syria, and have brought their wounded to hospitals in Tripoli, and use the city and its suburbs as a place to house their families.

Tripoli’s sectarian warriors, on both sides of the firing line between Jebel Mohsen and Bab al-Tabbaneh, are increasingly using a narrative of “resistance” to justify their conflict. The Lebanese Sunni fighters of Bab al-Tabbaneh and its allied neighborhoods insist that their support for the Syrian opposition, especially its armed elements, is necessary to help the Syrians resist oppression. These Sunni partisans also see the defeat of the Bashar al-Assad government as an act of resistance to lingering Syrian influence in Lebanon, and a possible Syrian re-occupation of the country.

The Arab Democratic Party (ADP), which is the most powerful Alawite-majority political party in Lebanon, and the dominant political and military force in Jebel Mohsen, views the struggle with their neighbors as a vicious war of survival. Alawites, numbering 60,000 in a city of almost half a million potential Sunni enemies, and surrounded on all sides by neighborhoods that they are locked in seemingly interminable combat with, identify more strongly with the Alawite-led Syrian government than ever before. As the Syrian Civil War has progressed, and expressions of sectarian hatred and bloodshed between Sunni opposition forces and Alawites has increased, the Lebanese Alawite community of Jebel Mohsen has become even more convinced that it is resisting its potential annihilation at the hands of committed Tripolian Salafist fighters.

The Sunni demographic advantage in the regions of northern Lebanon surrounding Tripoli offers a logical base of support for the development of an incipient, highly-motivated, and combative Lebanese Salafist social current to develop. Tripoli’s Sunni-majority, impoverished neighborhoods are the particular front-lines and proving-ground in this developing process of communal solidarity. The battle between Tripoli’s restive Sunni neighborhood and Jebel Mohsen is the new training ground of an aspiring generation of Lebanese Salafist fighters looking to emulate the model of their Syrian compatriots. A constant presence of armed Syrian opposition members, and their families, in these Sunni front-line neighborhoods and the constant inspiration they provide Tripoli’s Sunni fighters.

Learning from the example of the armed opposition groups in Syria, Sunni fighting organizations such as the Khodr al-Masri Brigades are beginning to post videos on YouTube. These are their official declarations of opposition against al-Assad in solidarity with the Syrian rebels and criticizing Hezbollah and its leader Hassan Nasrallah, and videos of their fighters engaging in combat with the Alawites of Jebel Mohsen. The cell-phone video quality of filmed combat operations bears striking resemblance to those performed by affiliates of the Free Syrian Army and other armed opposition groups inside of Syria.

Hussam Sabbagh, a Tripolian Salafist sheikh with murky ties to the jihadist organization Fatah al-Islam, who is also a popular and respected street commander in Bab al-Tabbaneh, was elected the head of all Salafist fighting forces in Tripoli. This action is reported to be inspired by the organization of disparate Syrian Salafist fighting organizations into the “Gathering of the Ansar of Islam” in northern Syria. The more militant Salafist sheikhs throughout Tripoli and northern Lebanon are also calling for Lebanese Sunnis to refrain from fighting in Syria, where there is no shortage of Syrians willing to fight and die to topple the al-Assad government, and to instead focus their energies on the battle for the control of Lebanon, starting in Tripoli and against the Alawite community.

As the awakening and reorganization of Salafist groups in Tripoli inspired by the struggle of Syrian rebels increase, tensions are rising between these organizations and already established Sunni political groups in the city. These include the long-standing Salafist Tawhid Movement, an ally of the March 8 bloc, Lebanese Prime Minister Najib Miqati’s Solidarity Bloc, and the mainstream Future Movement. Targeted attacks have been conducted against Sheikh Bilal Shabaan, the leader of the Tawhid Party, and death threats leveled against the Sunni Mufti of Northern Lebanon, Sheikh Malek Shaar, who as a consequence of these threats is now in self-imposed exile in Paris.

At the moment, and into the near future, the Syrian Revolution-inspired Lebanese Salafist militias in and around Tripoli are in an incipient state of organization. These groups are organized on a sub-district level within larger neighborhoods like Bab al-Tabbaneh, and do not currently have enough weapons or the logistical capacity to overcome their “near enemies,” the Alawite community of Tripoli. Groups such as the Khodr al-Masri Brigades are emulating the organizing model of Syria’s Islamist militias in the hope of building the communal solidarity and fighting cohesion necessary to defeat their Alawite neighbors. In doing so, these organizations are hoping to strike a major blow to what they see as the lingering al-Assad influence inside northern Lebanon. This ultimately includes developing a highly-motivated, battle-tested, and committed fighting force that could in time confront the Shi’a parties of Hezbollah and AMAL, and their political allies inside of Lebanon.

A Winter of Worry in the Levant

The addition of hundreds of thousands of unemployed and impoverished Syrian refugees in Lebanon’s most poverty-stricken regions, especially Tripoli and in the Akkar, presents an enormous socio-economic burden for Lebanon and the local communities impacted by this population movement. The cost of living in areas of northern Lebanon has dramatically increased due to the number of Syrians entering the local communities and the loss of most of the cross-border trade between Lebanon and Syria. Lebanon’s poorest residents, including many people in Tripoli and the Akkar, benefited significantly from cheap consumer goods imported from Syria into Lebanon. With the severe disruption of this trade due to the war in Syria, middle and working-class Lebanese people, especially in highly vulnerable districts of Tripoli like Jebel Mohsen and its Sunni neighbors, have less purchasing power and are vulnerable to slipping into severe poverty .

As the rainy, damp-humid winter season begins in the Levant, caring for these Syrians, and ensuring that they are fed, medicated, provided shelter, and their children educated, is a task that the Lebanese government will not be able to afford alone. Unlike in Jordan, and now increasingly in Turkey, Syrians in Lebanon live amidst the Lebanese population, either sheltered by Lebanese families, or renting their own room or apartments in Lebanese villages and cities. It is estimated that a full third of Syrian refugees now present in Lebanon are living with Lebanese host families, the majority of them in poor, underserviced regions such as Tripoli and the Akkar.

Sectarian political competition and uneven and inequitable social development throughout the country, was one of the major stress causes of the Lebanese Civil War of 1975-1990. Tripoli, with its high poverty rate, stagnant economy, large influx of desperate Syrians, and violent inter and intra-sectarian disputes, is becoming a city under duress. The stresses placed upon the city and its surrounding areas in northern Lebanon is tattering its civil society as the Syrian Civil War worsens.