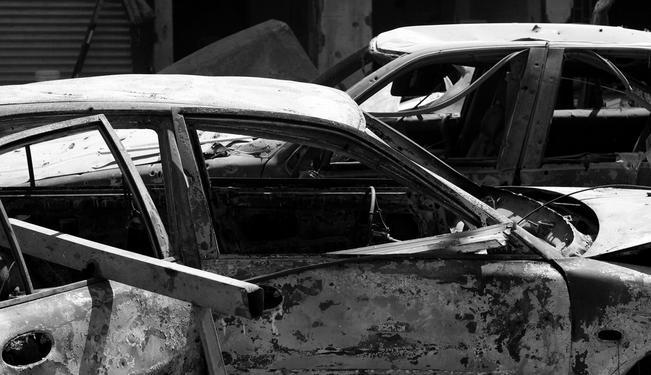 The memory of mass violence is never simply a memory in Lebanon, a country which has long endured sectarian strife and is now also feeling the effects of the civil war in Syria.

It is surreal to wake up to news of a car bomb back home in Lebanon, now thousands of miles away. Immediately, the war-shaped body is both numb and preoccupied with images of death and destruction. The mind wanders and sutures the past, present, and future seamlessly. Phone calls, emails, and texts begin. The space between a call and its response seems immense, and the time it takes to hear from blood and choice family — particularly when they live or work or frequent the targeted neighborhood — is bloated with the macabre.

Part of this inheritance are the frames through which we understand violence. Thus, before it was announced that there was an actual target to this bombing, and that the target's name was Wissam al-Hassan, the scars of the past came alive. They spoke of Muslim-Christian violence, of Israeli plots and American-Israeli plots, of terrorist groups, and of the Syrian Civil War finally finding its natural home in Beirut.

Now that we know the target, the violence seems easy to frame, and thus to contain. It somehow becomes less terrifying that this was an assassination, and not just a fifty kilogram TNT car bomb in a dense civilian and commercial area that houses at least three schools and two hospitals. Even if at least eight people were killed and almost a hundred wounded alongside the head of the Information Branch of the Internal Security Forces, we somehow find relief in the fact that there was in fact a target at all. We can understand now why this particular person was assassinated; it makes sense given the political landscape of today. After all, this is Lebanon, where the memory of mass violence is never really a memory. This is also a Lebanon living in the shadow of a post-invasion Iraq and a civil war Syria, where the delusional security that comes with identifying individual targets to mass killings has become almost a luxury.

A car bomb is not a car bomb. It is a spectacle. It is a statement. It is always the beginning of more, and it is always omnipotent. A car bomb is egalitarian. It does not discriminate. In Lebanon, it is an incitement to memory — both short and long term. A warning, or perhaps a reminder, that life is cheaper than TNT, that blood runs faster than fire-extinguishing water, and that car bombs, snipers, checkpoints and bombs are always already here, waiting to break the surface of the present.

Of course, this is not only Lebanon. As neighborhoods contract and as we find a logic — the old and comfortable logic of assassination — there are ever expanding linkages to be made. The images one wakes up to a world away, the smell of blood and burning carried on a late summer breeze, the familiar vibration that one feels on their windows while at home in Achrafieh, the detached tone one uses when saying they are safe, have become common in our corner of the world. They are what is happening within an image of a drone attack in Pakistan or in Yemen, of air strikes on Syrian cities and shock and awe campaigns in Iraq. They are what happens when an Israeli bomb explodes in Gaza or in Dahieh.

We have been told for years (by states, politicians, leaders and by murderers) that the "proper" name — the "precise" name — for all of this, is "collateral damage."

*[A version of this article was originally published by Jadaliyya on October 19, 2012].