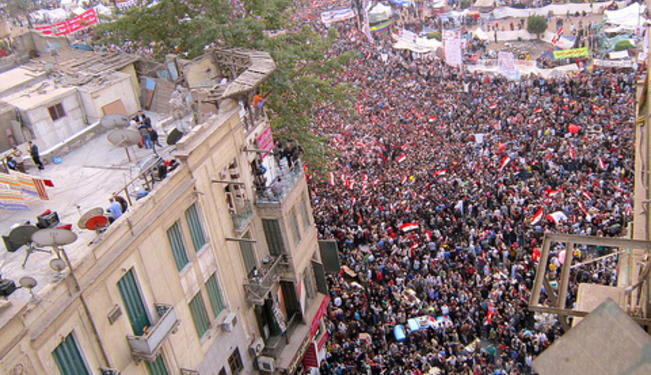 This month's first anniversary of the uprising that toppled Mubarak contains a stark message for Egypt’s revolutionaries. They are being marginalised as vested interests and traditional political forces experienced in political horse trading fill the vacuum of leadership. This message may well also be meant for other revolutionaries in the Arab world.

Egypt´s military council, backed by Islamist and secular political parties, has upstaged the 25 January celebrations of the anniversary of the protests that ousted President Hosni Mubarak even before the party gets underway. The military pre-empted plans by the revolutionary youth and militant soccer fan groups whose mass protests early last year forced Mubarak from office by announcing that they would organise their own celebration together with the Muslim Brotherhood on Cairo’s Tahrir Square.

The military’s co-opting of the celebrations is certain to dash hopes of the protesters to exploit the anniversary to launch what they call a second revolution that would force the armed forces to immediately relinquish power. Instead, it is likely to seal their defeat in a country that has grown tired of demonstrations, still largely reveres the military despite its brutal response to anti-government protests late last year and wants to see tangible results of its revolt.

The military’s move also signals the primacy of electoral over contentious politics in post-autocratic transition societies with the backing of the Brotherhood, which emerged as Egypt’s foremost political grouping with some 40 per cent of the vote in the first post-Mubarak elections. The Brotherhood’s backing of the military celebration is significant given its demonstrated ability to fill Tahrir Square and mobilise opposition against the military if it wanted to. The military is sending a stark message not only to Egyptian youth and soccer fan groups that established political organisations with well-oiled party machines rather than newly emerging political forces will shape the country’s future. The message is also to protesters elsewhere in the region that unless they can match their mobilisation and street skills with the art of electoral politics and backroom horse trading they too will be relegated to the sidelines of history.

Much of the youth and soccer groups’ criticism of the post-Mubarak transition rings true even if does not resonate with a majority of the population. They accuse the military of subverting a promised transition to real democracy in a bid to preserve its political and economic perks and interests and employing to do so the same if not worse repressive measures than the Mubarak regime. Scores have been killed in protests since Mubarak’s downfall, thousands injured and some 12,000 people, including activists, bloggers and soccer fans dragged in front of military courts.

The one joker in the military’s plans to upstage the youth and soccer fan groups and give them the death knell is the spectre of violent confrontation during the celebrations. Fear of a repeat of the bitter street battles that took place between security forces and soccer fans in November and December last year could persuade many Egyptians to steer clear of Tahrir Square on 25 January. Egypt’s military ruler, Field Marshall Mohamed Hussein Tantawi issued a thinly veiled warning to the youth and soccer fan groups days before the 25 January celebrations that Egypt faced unprecedented “grave dangers” but that the military would protect it. The statement, echoing Mubarak’s tactic of distracting attention from domestic issues by invoking an alleged foreign threat, was contrived to rally public opinion against the protesters.

A failure to rally the masses would dent the military’s efforts to maintain the high ground and would boost revolutionary moves to thwart its plans. Nonetheless, the youth and soccer fan groups are on treacherous ground. They have lost much of the popular support they enjoyed in the run-up to and immediate aftermath of Mubarak’s ousting. Their refusal to surrender Tahrir Square in favour of traditional politics has won them few brownie points with the public. Their marginalisation is compounded by the fact that men and women perceived to be honest and of faith have emerged victorious in the election, raising hopes that government will be free of nepotism and corruption.

Revolutionaries in other Middle Eastern and North African societies in transition may well conclude from the Egyptian experience that it is a fatal mistake to simply topple an autocratic leader and not to push for the ultimate uprooting of a failed system. It promises to make transitions even more contentious and could inspire the kind of resilience and determination displayed by protesters in Syria who have refused to give ground to a ten-month old brutal government crackdown that has already cost some 5,000 lives.

Protesters across the Middle East and North Africa like their counterparts in other parts of the world have mastered the art of seemingly leaderless revolt and exploitation of new technology. However, the lesson of Egypt is that they will also increasingly have to harness the skills of traditional politics and face up to the reality of realpolitik to ensure that they not only win a battle but also the war.