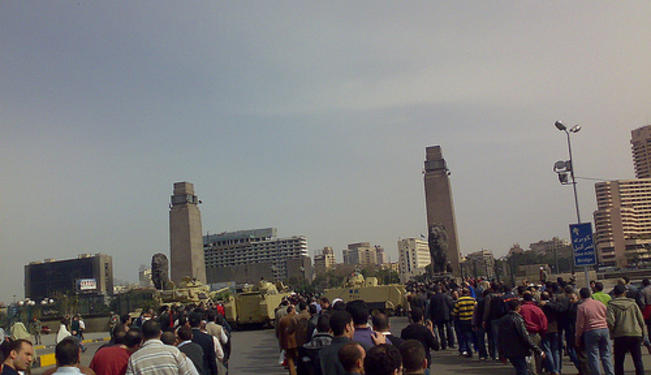 The Egyptian uprising of 2011 took the world by surprise, but the revolt had been years in the making. The forces that came together with the common goal of toppling the regime of Hosni Mubarak were a result of a decade of mobilization and re-activation of Egyptian civil society.

Back in the 1990s direct criticism of the regime, and particularly of President Hosni Mubarak, was virtually unheard of in Egypt. No large-scale demonstrations had taken place in the country since the mass riots of 1977 under President Anwar al-Sadat, and the few who dared to criticize were subjected to intimidation and repression at the hands of the security apparatus. And yet, discontent was brewing over the economic policies of the government, as well as the practices of an increasingly brutal police force.

The first large-scale demonstrations in decades came in October 2000 as a response to the Palestinian Intifada of that year. Although this was an issue seemingly external to Egypt, the protests in solidarity with the Palestinians also opened the way for vocal criticism of Mubarak’s regime. The Egyptian protestors for the Palestinian cause perceived that their own regime was part of the problem, and developed the slogan “the road to Jerusalem runs through Cairo.”

In March 2003, the Egyptian street erupted in protest again, this time over the American-led invasion of Iraq. Again, what seemed to be an external issue gained domestic significance as American warships passed through Egyptian territorial waters en route to Iraq. The Egyptian government’s support for American Middle East-policy led to increased opposition, while at the same time the pro-intifada and anti-war movements developed into a movement against the regime of Mubarak.

The Egyptian Movement for Change, better known under their unofficial moniker Kifaya (meaning ‘enough’ in Arabic), was the most influential of the anti-regime movements that emerged. Kifaya was established in 2004, but gained increased attention for their agenda during the elections season in 2005. Veterans from the 1970s student revolts were heavily involved in the group, but it also succeeded in mobilizing a new generation of young people who had previously not been involved in politics.

Kifaya staged hundreds of protests over the course of a few years, many of them connected to the parliamentary and presidential elections of 2005. Despite that the protests were relatively small, they received a lot of media coverage and the group broke a number of taboos.

Kifaya itself eventually fell apart due to a combination of internal and external factors, but the stage had been set for further challenges to the regime from ordinary citizens. One of the main criticisms leveled against Kifaya was that the group was mainly composed of highly educated people in the cities, and that its ability to connect with and mobilize the masses of less fortunate Egyptians was limited. However, the Egyptian working class was about to initiate its own process of mobilization.

The Nile Delta industrial town of Mahalla al-Kubra has a long history of labor militancy dating back to the establishment of the Misr Spinning and Weaving Company nearly a century ago. In 2006, the workers at the mill had been promised increased bonuses to keep up with the rise in commodity prices. When the bonuses failed to materialize, workers started to refuse their paychecks and production slowed down. On December 7, 3000 female garment workers laid down their work and persuaded their male colleagues in the spinning and weaving sections to do the same. The following four days of strikes, factory occupation and massive demonstrations succeeded in forcing a number of concessions from the management. This incident initiated what has been coined the winter of labor discontent as Mahalla’s victory inspired thousands of Egyptian workers, from railway engineers to cement workers, to take collective action.

Mahalla returned to the center of events when its workers called for a strike over a national minimum wage on April 6, 2008. When the day came, riot police flooded the town and the strike was called off. It was only in the afternoon that built-up tensions erupted in spontaneous mass riots that were to last for two days. Thousands of protestors clashed with police, and Mubarak posters were burnt as socioeconomic demands spilled over into anti-regime protests. Meanwhile, the Mahalla workers had inspired the founding of a new kind of pro-democracy movement.

The April 6 Youth Movement grew out of a call on Facebook for a general strike in support of the workers in Mahalla. Despite its demographic make-up being similar to its precursor, Kifaya, April 6 was much more concerned with integrating workers’ socioeconomic demands in their own political agenda.

Muslim Brotherhood in Parliament
While Egyptian leftists and liberals took a confrontational approach to the regime, the largest opposition group, the Muslim Brotherhood, preferred to work within existing institutions. Running as independents, members of the outlawed group won around 20% of the parliamentary seats in the 2005 elections. Although their numbers may not have been sufficient to effect substantial changes in policy, their presence heightened the level of political debate in parliament. With a disciplined contingent of Muslim Brotherhood members present, MPs from the ruling National Democratic Party (NDP) could no longer afford to shirk their parliamentary duties. The Brotherhood MPs also succeeded in stirring public debate around a number of issues.

After this period of relative political opening, the regime opted to re-tighten its grip. A number of constitutional amendments were passed in 2007, entailing a weakening of judicial oversight over elections, provisions to curtail the Muslim Brotherhood's participation in politics, and normalization of parts of the emergency law, which allowed for military trials, indefinite detention, and several other violations of human rights protections. Despite this reversal in political openness, the process of mobilization continued, and the frequency of strikes, sit-ins, industrial actions, and other forms of protest only increased over the following years.

Apart from voicing opposition to the regime, protest activities also exposed the degree to which state institutions were riddled with corruption and decay. Hence, young people getting involved in politics for the first time went to movements rather than political parties, as even the oppositional parties were seen as part of the same corrupt machinery.

The entrance of a new generation also allowed for new alliances between opposition groups to emerge. Old hostilities between forces such as the Islamists and the leftists gave way for tentative cooperation towards a common goal. The young generation also relied on alternative media, independent from official outlets for regime propaganda. One particularly grim incident of brutality and sexual assault against female protestors in 2005 led to a sharp increase in anti-regime blogging, and later on citizen journalism through channels such as Facebook, YouTube, and Twitter.

When the Egyptian people rose up against the regime last year, the popular forces involved had already been through a process of mobilization and maturing. There are growing signs indicating that the Supreme Council of the Armed Forces (SCAF), currently in power, does not intend to take Egypt towards a more democratic polity.

However, it is hard to imagine that the Egyptian people will be subdued again. The level of mobilization and citizen involvement in politics has risen to unprecedented levels as a result of the uprising of 2011. Where observers before could have described the Egyptian citizenry as largely apathetic and uninterested in politics, people from all walks of life are now protesting, organizing, and discussing political developments on every street corner.