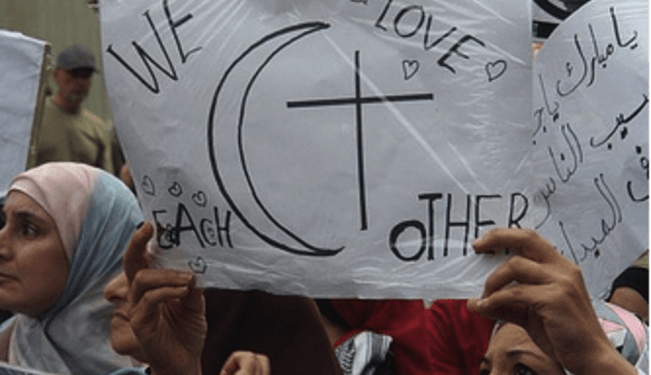 On January 1, 2011, Egyptians woke to news of the horrendous bombings of the al-Qadissayin church in Alexandria. Twenty Copts were killed when a car bomb exploded following late night prayers. Fearing further attacks against churches, some Muslims made a public stand of solidarity during Christmas celebrations due to commence one week later on January 6. With supporters protecting churches, and sometimes attending mass, national unity—particularly in urban Cairo, Alexandria and other big cities—was at its best.

The quintessential image of national unity in Egypt—the Muslim Sheikh and the Coptic priest hand-in-hand with the intertwined cross and crescent flag—dates back to the 1919 Egyptian revolution, when protests broke out in support of Sa’ad Zaghlul’s calls to attend the Paris Peace Conference and put forward Egypt’s case for independence. Over 90 years later this image was mirrored in the 18 days that called for the fall of Hosni Mubarak and his regime. As images of Tahrir Square were beamed via satellite and the world watched a ‘televised revolution’, the iconic images of national unity were brought to the fore. Copts stood guard over Muslims as they performed Friday prayers in the square, while Muslims in return stood guard over Coptic Sunday mass.

Yet, by March 2011 deep-seated tensions emerged. A series of incidents, ranging from killings to attacks on churches has taken place over the past year. According to neo-conservative commentator Ayaan Hirsi Ali, this is evidence of the growing ‘global war on Christians in the Muslim World’. In an article published in Newsweek, she claimed that while the Western world watched Muslim combatants of the Arab Spring fight tyranny, they were also unleashing genocide on Christians. This has led her to coin the term ‘Christophobia”- a simplistic concept that, according to her argument far outweighs the dangers of Islamophobia in the West. Ali, like an increasing number of other commentators, makes reductionist statements which view not only the Muslim population in Egypt as a homogenous Salafi and Christian-hating unit but which also view the Copts as a cohesive and passive single entity.

However, in relation to Egypt, three things which partially explain some of the results of the uprising, and in particular the impact on the Copts, should be noted. To begin with, the role of the new ‘regime’ in the shape of the Supreme Council of the Armed Forces (SCAF) should be examined, particularly as they can be held responsible for aggravating long-rooted tensions that do exist between communities in Egypt—be they socio-economic or religiously motivated. While it is not the intention to belittle the dozens of incidents that have occurred and whose gravity range from discriminatory practices to murder, the role of the de-facto governing body (SCAF), and its potential involvement in these aggravations, must be acknowledged.

In late September 2011, a dispute concerning the height of a Coptic Church bell tower escalated and resulted in the burning of that church. Less than two weeks later, on October 9, when Coptic protestors met at Maspero in Cairo, the headquarters for state television and radio broadcasting, marchers were met with unprecedented brutality. This was implemented not by the 'Muslim' masses that Ali mentioned in her article, but by the forces of the SCAF. Issuing news feeds from the very building outside which protesters were gathered, broadcasters, at the instigation of their military command superiors, claimed that Copts were attacking the army and delivered a call for ‘honorable Egyptians’ to come and protect the institution. The implication was that not only were the protesting Copts dishonorable; they were also not Egyptian. Over 300 people were injured and 24 Copts were killed after the SCAF attacked protestors. This massacre was not Muslim-endorsed, although Muslims were actors in events. This was a massacre endorsed by the very structures that are currently running the state. While it may have begun as a communal issue that concerned a church building on a local level, it culminated in the deliberate murder of protestors, and pitted the Copts as an outside community against the inside Muslim.

In addition to the role of the SCAF, the failures of the Coptic Pope, Shenouda III, who in effect is the political leader of the community, have exacerbated tensions. During the 18-day uprising, he called on Copts to refrain from demonstrating on the streets of Egypt, and instead sided with the Mubarak regime. Following the massacre at Maspero in October, Shenouda did not issue a statement for three days and even then it fell short of condemning the SCAF. During Orthodox Christmas mass on January 6, 2012, Shenouda thanked the Council for their role in protecting the country, and has in the last few days released a statement which has been widely interpreted as condemning the movement of civil disobedience which is expected to mark the one-year anniversary of Mubarak’s resignation.

While one may interpret this as Shenouda’s attempt to protect the community from further violence, Shenouda’s actions have also revealed deep-rooted schisms which are based as much on religious affiliation as they are on class and socio-economic prospects. The Egyptian uprising has a Coptic voice that is increasingly unafraid to criticize not only the Egyptian state but also the poly-religious leadership of the Church.

For instance, Mina Daniel, a 19-year-old activist who was killed in Maspero, has been hailed as a Coptic and as an Egyptian martyr for the national cause. Having modeled himself as the “Egyptian Guevara”, his death has raised him to iconic status, often as a comparison to the Muslim Khaled Said who was murdered by police in June 2010. Daniel is a ‘saint’, a Copt, and a rebel who protested for his cause. Moreover, the increasing prevalence of Coptic protests and protestors, no longer only outside the patriarch compound, but in downtown Cairo and Maspero is evidence of their increased presence which challenges the dominant discourse of Islamists and secular computer-savvy liberals.

There are many battles that still need to be fought, not least overcoming the 70% Islamist parliament, working on religious tolerance and addressing deep-seated social, economic and political grievance – but these are battles that most opposition groups, irrespective of religious affiliation, face.