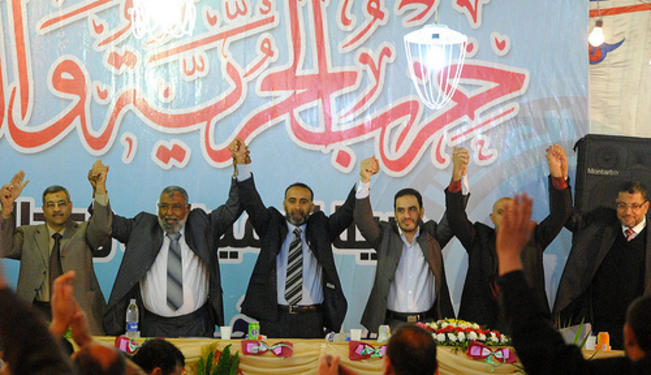 Securing an overwhelming victory in Egypt’s parliamentary elections, the Muslim Brotherhood’s Freedom and Justice Party will without a doubt play a strong role in charting the course of Egypt’s future. But despite its strong mandate and its traditional religious orientation, Egypt’s new power broker will find that political moderation may be the lesser of two evils.

Opinions on the political intentions of the Muslim Brotherhood inside and outside Egypt are divided. There are those commentators that perceive the Brotherhood as a moderate political force, stressing the centrist position it has taken after the ouster of Hosni Mubarak, and a force for good, pointing to its record of providing social services for Egypt’s population. Other observers hold a markedly different view and regard the organisation as the emblem of Islamic tyranny, underlining its anti-Western and anti-secular rhetoric, and drawing parallels between its political platform and that of Iran’s theocracy. A number of considerations deserve attention in this debate if we are to ponder the Muslim Brotherhood’s role in the coming years.

Since the military, in June 2011, lifted the ban on the Muslim Brotherhood that ousted President Hosni Mubarak had imposed, the organisation has been forced to revisit the relationship between its ideological religious foundation and its political programme. Different views on a platform for its Freedom and Justice Party and the relationship with the group’s other bodies have surfaced since then, exposing the movement’s internal fault lines.

Inspired by experiences of other Islamist parties in the region, some members have advocated a functional separation between the FJP and the Muslim Brotherhood, with the former focused mainly on political participation and the latter on religious and social activism. More importantly, the Muslim Brotherhood has been struggling on how it will render its emphasis on implementation of the Shari’a into a political program.

In an interview with the Egyptian newspaper Al Masri Al Youm, Ibrahim al-Houdaiby, a grandson of the Brotherhood’s late Supreme Guide Ma’amon al-Houdaiby, “foresees that as threats of systematic crackdown, which had long forced the group to sideline conflicting ideological differences in the name of cohesion, are diminishing, internal disputes will lead to the disintegration of the group into many parties that will bear “multiple manifestations” of political Islam”.

So far, the establishment of Muslim Brotherhood offspring parties such as the Wasat Party and the Renaissance Platform, that have spilled over from its internal factionalisations, have had a limited effect on the organisation’s cohesion. However, the Brotherhood’s generational and ideological fault lines are proof that the organisation is far from the monolith many outsiders perceive it to be.

Thus far, the FJP has received a clear mandate from the people to seek a strong role in Egypt’s new legislative body. However, the prospects of political liberalization that followed Mubarak’s ouster have imposed tremendous pressure on the Muslim Brotherhood’s new party by intensifying the competition. The question now is to what extent will they be able to keep the broad support of the people of Egypt? And, to what extent are other (Islamist) parties able to form a coherent alternative to the FJP?

The Muslim Brotherhood’s traditionally hard-line leadership has implicitly acknowledged this. In a recently published article on the website Asharq Alwasat entitled: “Egypt’s Freedom and Justice Party: our vision for the future”, the spokesman of the Muslim Brotherhood, Mohammed Mursi, argued that the FJP’s programme for the next parliamentary cycle will be based on a firm economic orientation. This course certainly indicates that the Muslim Brotherhood is intent on being responsive to the changing needs of the people. But their current political direction should be seen as a pragmatic choice rather than a sign of wavering dogmatism.

So far, none of the other political parties have been able to form a coherent alternative that has resounded with Egypt’s electorate. Many other Islamist parties, except the El-Noor Party, have been suffering from the Muslim Brotherhood’s popular image as the arch nemesis of the former regime the people so desperately have tried to get rid of. Meanwhile, liberal parties are faced with a negative public image and internal divisions that have held them from playing a significant role so far. But with a serious fiscal deficit, quickly diminishing foreign currency reserves, pressure on the currency,and further fiscal constraints looming with the IMF considering Egypt’s request for aid, the Muslim Brotherhood faces a formidable challenge in meeting Egypt’s structural economic problems.

A Moderate Axis in the Middle East

The role of the international community not only deserves attention from an economic point of view. Politically, the new role of the Muslim Brotherhood will be cause for worry on the part of the US and Israel who have regarded Egypt as strategically important and a traditional ally of the West in the region. They will have to deal with a government that regardless of its make up will be more critical of the West’s policies in the region. Just as Egypt over the years has had to deal with opposing and domestically unpopular policies of democratically elected governments in the West, so too will these countries have to adapt to a more equal relationship.

In dealing with a more assertive Egypt, the United States’ military aid will be of some strategic leverage. But as Paul Pillar, a 28-year veteran of the CIA said in article in the Washington Post: “The problem is not that an Egyptian party reflects those views; the problem is with the occupiers and colonizers, and with the groundless idea that support for occupation and colonization could be the basis for some kind of moderate axis in the Middle East.” In any case, the Muslim Brotherhood will find itself in a squeeze here, having to balance the financial considerations – not in the least of the country’s powerful military – and public opinion that favours a much more pronounced anti-Western policy.

Many have called Egypt’s uprising and current transition to democracy the dawn of a new Arab awakening. Whether the country’s new political direction will transform Egypt’s society remains to be seen regardless of the role of the Muslim Brotherhood. Egypt is a country with strong kinship and tribal ties in which the top-down approaches of any government are likely to fail specifically when they are executed by a largely ineffective bureaucracy.

Having to assume the role of power broker, micro managing both its own policies and a wide variety of political groups, the Muslim Brotherhood will have to prioritize. This will undoubtedly open a range of opportunities for civil society to influence the process of modernisation in Egypt. However, this will largely depend on reform of the current law governing NGOs that places such organisations under the (financial) supervision of the Ministry of International Co-operation.

With these considerations in mind, the FJP will assert itself in the coming years on economic issues – the demographic youth bulge, a faltering education system, a weak social safety net, and unequal distribution of growth. This will not automatically result in the modern Islamic state the West might hope for. Egypt’s political life will remain an expression of its religious identity and all parties will have to tie themselves firmly to its socially conservative fabric in order to gain the vote of the electorate. But with a looming manifestation of different forms of political Islam, and the checks-and-balances provided by the international community, civil society, and the military, the FJP will be forced to walk the path of political moderation for the time being. The Muslim Brotherhood will be Egypt’s shepherd for the coming years, but there is more than one wolf on the look out, and keeping the flock together and moving will be hard enough as it is.