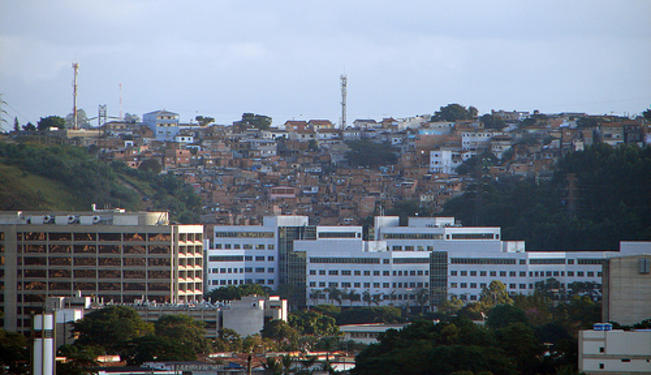 Brazil, while quickly becoming an emerging economic power, is still struggling to improve the socioeconomic problems brought on from the legacy of its autocratic past. This is the first of four parts.

Brazil is widely known for her beautiful, multicultural heritage, and offers a variety of practically anything one can imagine. She is famous for her ethnic cuisine, her varieties of music, her parades and her rich dances. She is also admired for her landscape, her breathtaking beaches and especially for her gracious and hospitable people. She is a country that is rich in natural resources and has a variety of emergent industries (oil, agriculture, timber, and manufacturing) which are helping her rapidly establish herself as a global leader.

However, Brazil has a darker side, that of abject poverty that plagues many of its people daily. Hopefully, as a new middle class emerges, Brazil’s afflicted will see windows of opportunities to escape the horrors of absolute destitution. Social welfare programs, such as the Bolsa Familia (Family Allowance), provide cash directly to impoverished families to improve their living standards and to keep children in school. Over the past decade, these programs have functioned effectively enough to reduce the nation’s poverty rate.

Nonetheless, despite some successes, these efforts ran into a metaphorical brick wall, when critics justifiably decried the political corruption and recipient abuses associated with the program. But, as a resilient and powerful emerging economic power, Brazil has the ability to develop into nation that is largely free of poverty and rampant corruption. In fact, that prospect becomes more probable each passing year. Brazil, which like most nations, is full of contradictions, and she must strive for many years before she reaches her full potential as an economic power.

As an expatriate resident of Brazil, I have had the opportunity to see up close the various dynamics at play as the country prospers. I reside in the city of Curitiba, which bears the reputation of being “a first world city in a third world country.” Certainly, this distinction is ironic in many respects. This beloved city, which hosts musical events in outdoor pavilions, offers visitors a multitude of parks and museums. Curitiba also offers bars, flea markets and restaurants.  It is also a vibrant commercial center.  Several well-known international companies, including those that specialize in information technology, engineering and food services established offices in Curitiba within the last two decades. Yet, beyond this gloss a separate universe exists that proves beyond a doubt that the glittering first world aspirations of Curitiba, and, indeed that of all of Brazil, struggle somewhat uncomfortably with an omnipotent third world reality.

On one side, an observer would see the favelas (or Barrios Africanos). Though not as large as similar communities in Rio de Janeiro and São Paulo, these favelas remain in and around Curitiba as an indictment against various social welfare programs that dismally failed.  All too often, these, residents appear as wraiths, scavenging scraps of garbage and bundling them on carts hauled by foot. These unfortunate individuals later resell this refuse back to the city in exchange for transportation passes and food. While this provides a useful sanitation service, it stands as a reminder that the ultra-poor survive by such menial tasks.

An observer would also see people with severe, but treatable, medical afflictions that could be resolved with nothing more than rudimentary access to preventive medical care. I recently witnessed a man on the street who was a case in point. His leg so swollen from his illness that he transported himself by a skateboard, instead of wheelchair. I also witnessed a homeless alcoholic, weighed down with what seemed to be stolen items, which included expensive computer keyboards and cell phones. All of these in addition to his growing collection of recently consumed beer bottles.

I often wonder how society failed these individuals and placed them in such a miserable position. Did the social welfare system fail by not meeting their critical needs for assistance in education, medical care and employment opportunities?  Alternatively, did the individuals fail themselves in not having sufficient initiative to better their lives?  Or, yet again, was it a combination of both, society creating the preconditions for individual collapse?   For answers, I researched factors that possibly contribute to Brazil’s current inability to meet the needs of its poor citizens. Among these factors are political, historical, gender and ethnic factors as well as the design of the social welfare system. Furthermore, an underlying factor that we must not neglect is the role of social cohesion, such as the level of trust between citizens, faith in the government and adherence to the rule of law.

All these issues are interrelated and their presence or lack thereof affects the quality of social cohesion and the community’s resistance to blight and social decay. This article will discuss the interrelationship of these factors and give suggestions for improvement of the social welfare model. This article will also discuss the same factors with the Nordic model used as a working example of a system that seems to work. The Nordic model often serves as a sterling example of government and citizenry working together to promote the common good.

Building Trust: The Role of Social Trust and Cohesion.

Social cohesion and trust seemingly fall to a uniquely low level in Brazil. Because many in the populace tend to view the government as an adversary, the rule of law is often ignored. This broad-based lack of trust spins ever wider spirals of governmental corruption, as the government does not view itself in many cases as the guardian of the most impoverished, but rather as the enforcer of the often harsh legal code. This antagonism overlays much lauded national social welfare programs and is an incubator for wide spread corruption. The primary role of civic engagement, i.e., that of citizens taking it upon themselves to monitor the government’s activities, while it exists in many cases, often beats a hasty retreat when confronted with the uncomfortable realities of the favelas.

The seeming winners of this governmental failure and social breakdown are the very wealthy. However, this view is extremely short sighted as they would be the biggest losers should serious disturbances occur. Nevertheless, it is indeed the poor who are the immediate and long-term losers, because pervasive governmental corruption prevents well intentioned bureaucrats from effectively channeling much needed assistance.

Is hope on the horizon? It is difficult to say. On the one hand, I do continue to see a strong and robust family structure because family members must often depend heavily on one another as there are so few avenues to escape poverty and the welfare system is emasculated. Yet, the grinding poverty reduces many to abject desperation which is the very enemy of any emergent social cohesion. Considering all of the above, we still must commend Brazil for creating an enabling environment where millions of people achieved middle class status and where even more dare to dream they can.