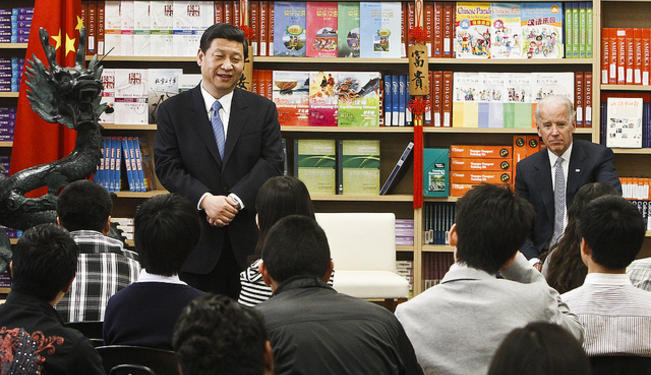 What to expect from China's new leadership in 2013.

It’s now been well over two months since the Communist Party in China handed power to a new generation of leaders led by Xi Jinping and Li Keqiang. Since then we’ve had copious analysis on what can be expected from a Xi-Li administration, and while nobody really knows for sure, Xi most definitely offers a livelier public presence than his wooden predecessor, Hu Jintao. This was demonstrated once again last month, when Xi embarked upon his first domestic inspection trip, a five-day tour of Guangdong province.

As Xi visited the cities Shenzhen, Zhuhai, Foshan, Guangzhou, observers noted a new, casual style emanating from officials. Speeches, press conferences, and meetings flew by, no longer encumbered by the weight of bureaucratic jargon. Elaborate preparations of the past, such as floral arrangements and red carpets, vanished. Xi himself walked around tie-less and grinning.

Xi and his administration also wasted no time signalling new priorities. When he visited Lotus Hill, the site of a statue honoring Deng Xiaoping, state media outlet Xinhua quoted Xi as saying, “We came here to show that we will unswervingly push towards reform and opening up.” His choice of province certainly pays tribute to China’s short history of reform: Guangdong was a testing ground for Deng’s “opening up” economic reforms,  beginning China’s transformation into the world’s second-largest economy. Xi's father, first generation leader Xi Zhongxun, also governed Guangdong in the late 1970s and early 1980s. His tenure is best remembered for his implementation of Special Economic Zones such as Shenzhen.

This being said, a few missing neckties and red carpets obviously do not constitute immediate wholesale change. In addition to making gestures of reform, Xi took the time to inspect military installations belonging to the province, including a visit aboard the Haikou, a naval destroyer responsible for patrolling the South China Sea. Unlike Hu, Xi has extensive military ties originating from his father’s tenure as a revolutionary general. Despite Xi’s smiling demeanor and reform-laden rhetoric, we should expect closer cooperation between the military and senior party brass from this coming administration, a notion reflected in Xi’s address to soldiers in the city of Huizhou: “We must achieve the great revival of the Chinese nation, and we must ensure there is unison between a prosperous country and a strong military.”

Also, while Xi’s visit in Shenzhen enjoyed a great degree of spontaneity, his subsequent visit to Guangzhou was heavily choreographed by security staff. Even in Shenzhen, Xi’s visit did not escape bad PR; on the eve of his visit there, 3,000 workers at a printing factory seized the moment to go on strike. After eight hours, armed policemen eventually dispersed the strike by beating the protesters into submission. As the strike occurred far from Xi, on the other end of Shenzhen, one wonders if such heavy-handed action was truly necessary. But there is no sign that Xi directly ordered these actions, and whatever legacy his administration wishes to leave behind, with regards to his calls for reform he has already outdone Hu in one aspect. Whereas Xi chose Guangdong as the site of his first official tour, Hu opted for Xibaipo, an area of great historical importance to the Communist Party as the site of its old headquarters, but of little relevance to future reform policies.

It should be noted that, like Xi, Hu also assumed leadership amid great optimism. As the man handpicked by Deng to be Jiang Zemin’s successor, Western analysts and Chinese activists hoped that Hu would introduce political reforms to complement Deng’s economic liberalization. Instead, Hu’s tenure brought about a deep freeze in the pace of reforms, and his wooden leadership style did little to endear him to the public.

Even in 2013, the Chinese political machine remains opaque, so it's hard to determine if Xi will embrace or retreat from his promises to reform. But his “Southern Tour” is promising, if only symbolic, and other players in the new Standing Committee demonstrate a much-needed desire to fix China’s problems – Wang Qishan, for instance, chaired a frank meeting on fighting internal party corruption that raised quite a few eyebrows. The initial, burgeoning impression is of an administration prepared to make a positive difference in leading the world’s most populous country and second largest economy, and that might make all the difference.