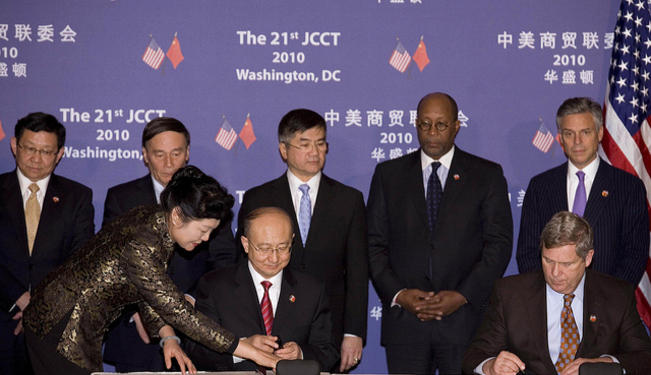 The Communist Party of China just concluded the 18th Party congress. Given the ongoing socio-economic issues and an increasingly independent army, will the new leadership bring about a change in China’s foreign policy?

On 8 November, 2,270 delegates of the Chinese Communist Party gathered in Beijing for the 18th Party Congress, where the next generation of China’s leaders took office. The whole process was concealed from domestic and international observers, and in all likelihood the most difficult decisions were made behind closed doors months earlier. In fact, the new president, Xi Jinping, and premier, Li Keqiang, were probably chosen years ago.

This opaque process and the heavily censored personal histories of the new leaders have left China watchers and other governments wondering what foreign policies China’s next generation of leaders will pursue. They should look for answers in China’s past practice.

China adopted a more pragmatic foreign policy after beginning its reform and opening policies in 1978. No longer would ideology play the determining role; instead, multilateral relations would be driven by recognition of the complexity of the international system, and would seek to create a stable environment for China to develop its domestic economy.

For China’s leaders, building the domestic economy and ensuring an international environment favourable to this goal are essential elements in guaranteeing the Party’s primary objective – regime survival. Chinese leadership decisions on foreign policy since 1978 must be viewed from this perspective.

The next generation of Chinese leaders will continue to be more concerned with domestic stability and economic development than with foreign policy. The importance that they place on foreign policy will mainly be a reflection of the extent to which those policies promote domestic priorities.

China’s current five-year economic plan heavily emphasises transforming its export-oriented economy into an economy led by domestic consumption with a high degree of indigenous innovation. This shift will require the concerted efforts of China’s leaders and will keep them focused on domestic matters in the near and medium term.

Another force in Chinese politics that will keep Beijing’s foreign policy on its intended trajectory is the outgoing fourth generation of leaders. When Chinese leaders retire, their political influence persists. After Xi and Li take office, they will not fully be in control of Chinese domestic and foreign policy. Instead, we can expect China’s former leaders to use their influence to make sure the policies they followed are not undone, just as Deng Xiaoping and Jiang Zemin did when they left office. Chinese leaders typically are unable to fully implement their own policy goals until years after they take office.

Due to this stabilising historical momentum and a strong focus on the domestic economy, the probability of major shifts in Chinese foreign policy is low, at least until Xi’s first term ends in 2017.

For India this means a certain degree of ongoing tension in strategic relations with China, though economic linkages will continue to increase. At a tactical level both countries will continue to press for advantageous positions along the line of actual control on the Sino-Indian border, but at a strategic level Beijing will cooperate with Delhi to ensure peace in Asia. China’s new leaders will keep on emphasising the strengthening of economic relations with India because Beijing’s foreign policy will continue to be an extension of what best serves its domestic policy priorities – economic development.

The main catalyst for a change in Sino-U.S. relations will not come from Beijing, it will stem from Washington’s “pivot” towards Asia. Although Beijing has been focused on creating stable international relations, the fact remains that China is a rising power that wants its security concerns to be respected by other major international players. If the U.S. is seen as interfering in China’s security affairs, especially in the South China Sea, Washington should expect a response that reflects China’s growing economic and military might and regional influence. Until then, it is important to remember that Beijing, and not the military, is directing policy, and Beijing is likely to pursue the existing policy of cautious restraint.

Even if China’s foreign policy is unlikely to change much in the first few years after Xi, Li and the other fifth generation leaders take office, to the extent that changes might occur, what should be expected?

Political scandals and difficulties have plagued the Chinese leadership this year. Bo Xilai, a Politburo member and Party Secretary of Chongqing, was thrown out of the Communist Party after his wife was found guilty of murdering a British businessman; the chief aide of Hu Jintao, Ling Jihua, was recently demoted after the failed cover-up of a fatal Ferrari crash involving his son and two female passengers; and at the Party’s summer retreat in Beidaihe in August, members were unable to come to a consensus on many important appointments for the next generation of leaders, indicating strong divisions within the Party.

Behind these difficulties are the machinations of Beijing’s two political factions, the Communist Youth League, associated with Hu Jintao, and the Shanghai Clique or Princelings, associated with Hu’s predecessor, Jiang Zemin and  new general secretary of the Communist Party, Xi Jinping. A less unified Party leadership could translate into a more fragmented voice in Chinese foreign policy, with different ministries and interest groups pursuing different objectives, leading to a less predictable and possibly more volatile foreign policy.

The other potential cause for a change in Chinese foreign policy is escalating Chinese nationalism. In early September nationalist protests over the Diaoyu Islands – called the Senkaku Islands in Japan – erupted across China, causing Japanese-owned businesses to close in major cities. A Chinese man was nearly beaten to death for driving a Japanese car in the city of Xi’an.

Displays of Chinese nationalism are not new, but a divided leadership may not be able to control the increasingly frequent nationalist protests, and might find it hard to resist nationalist demands for a tougher stance on foreign policy issues, especially issues of territorial integrity.

Adding fuel to the flames of this nationalism are the internet and new social media outlets that Beijing can no longer fully control. Many of China’s netizens are criticising authoritarian domestic policies as well as calling for Beijing to take a harder and more militaristic line on territorial disputes with countries like Japan and Vietnam. As a worst-case scenario this would translate into a Beijing less willing to negotiate with its neighbours over territorial disputes and more willing to flex its military might.

If China’s current five-year economic plan ending in 2015 is successful, its leaders may have the confidence and ability to enact major foreign policy changes. But until that happens, China’s new leaders are likely to continue a policy of non-confrontational economic development.

*[This article was originally published by The Gatewayhouse on November 2, 2012].