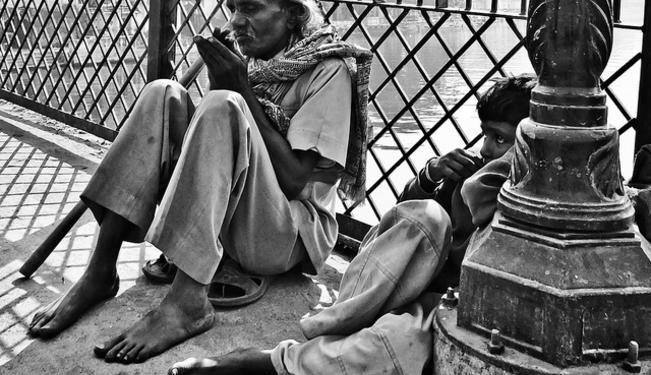 The gang rape case in New Delhi unveils the government's incapability to impose law and order.

The gang rape of a hapless girl in a bus on busy roads of India’s capital city New Delhi on December 16 is just another slap on the face of Indian democracy. Crime in the city has become a way of life leaving citizens to fend for themselves. Before we are able to recover from one sad occurrence, a new menace is lurking to pounce. Anti-corruption crusaders had squarely accused as many as fifteen ministers of the Manmohan Singh government for corruption.  Not one of them has dared to sue the accusers for false allegation or defamation.  Nearly a third of the Lok Sabha members are facing trials for various offences including heinous crimes as serious as murder, rape, extortion, robbery, kidnapping et al; and yet it is them who make laws for us to follow! Involved so intensely in their self-serving pursuits, how can they devote time to matters like public safety, welfare and development? No wonder, rapists, kidnappers, murderers rule the roost while the law abiding citizens, especially women pray for safety and take it as a divine reward if they are back home safe at night . What an adventure!

Here is what public safety and security means to those who govern us. As per the details available on government portals and ministerial statements in the Parliament early this year, there is a countrywide shortfall of as many as five lakh personnel. A pan-India panorama until March 2010 had a total of 50,059 police personnel deployed for VIP protection against an authorised strength of 28,298, that is, as many as 21,761 police personnel in illegal service of the VIPs at a time when there was just one constable for a population of 761 (against the authorised strength of one policeman per 131 population).  The situation since then has grown from bad to worse as the latest state of Delhi police deployment shows.  Today in Delhi, while there is only one policeman for 364 people, there are 20 policemen per VIP, that is, a force of 8,283 dedicated to 416 VIPs. Deployment of SPG, NSG, ITBP and other para-military forces for Z series category of VIPs is in addition. And in most cases the deployment is not to ward off any security threat (which exists only for a select few), but to add an aura of majesty to the persona of the Neta.

Malls, multiplexes, mandis, colleges, institutions, public service centres, bazars, parks, parking spaces – all have learnt to fend for themselves and have their own security guards who pose to protect them without any legal powers. Public safety and security is the first among fundamental responsibilities of every government and a constitutional right of every citizen; otherwise, Right to Life will have no meaning.

Most crimes pass off without evoking concern from politicians, police or judiciary. Demands and assurances on the floor of the Parliament for ‘stringent, exemplary punishment’, ‘speedy trials’, ‘fast track courts’ do not inspire confidence nor do the eloquent demagogy and crocodile tears shed by actors turned politicians because we have a history of on-going betrayal of public faith in the country. Shockingly, no responsible authority owns up shortcoming or failure at their level. At best, they put forth excuses to win sympathy and appreciation rather than punitive action. Sometimes, the excuses appear plausible too; but surely, someone is responsible for deficiency, poor maintenance, equipment failure or lack of coordination – whatever the excuse!

Union Home Minister, CM, police chief – all come out with promises as if this would be the last time people had it so bad.  But since the aim of these hollow declarations is only to cool down the rising public ire rather than change and improve, they are soon forgotten.  Very much like their old speeches and election manifestos, these assurances come handy to our politicians for every successive rape, each being an occasion to rehearse and improve their performance on camera rather than perform and demand performance in governance.

In no other democracy of the world would you find a Prime Minister so silent and immovably insensitive even on burning issues that trigger such public outcry and public outpouring as currently at Vijay Chawk and India Gate. We are today witnessing a live show of persistent indifference of a government that has become accustomed to watching from behind their windows the rising multitudes of angry yet disciplined and non-violent men and women demanding just fair and responsive governance. Obviously, democracy in India has drifted away from people.

Governance is now marred by rampant corruption, inefficiency and callousness with total absence of accountability almost all over the country. Fed up with a corrupt and callous system, people looking for alternatives under desperation have gradually drifted to the side of the insurgents. Already more than one fourth of the country from Bengal to Kerala is already under the sway of Maoist insurgents. In the fast expanding ‘Liberated Zones’ state authorities are denied access and it is the writ of the insurgents that prevails.

Starved farmers and dissatisfied soldiers are committing suicides as never before. Shopkeepers and small business concerns are buying security by employing private security guards and paying hafta. Victims of loot, molestation, rape, kidnap and perpetual harassment at the hands of outlaws have lost faith in the police and judiciary. They would rather negotiate and buy peace and, if possible, patronage of the hoodlums rather than face disdain and further exploitation at the police station.

Shocking tales drip in blood and tears routinely from government hospitals and private clinics where human life and organs are freely traded with heartless brutality and impunity. News of child abuse in play schools is a daily dose too! There is neither fear nor remorse even when perpetrators of crime are arrested because bail is usually granted sooner than later and the litigation lingers for decades.  Now, the Home Minister seeks to douse public ire by promising speedy action and setting up a Commission of Inquiry. What a cruel joke! By now, people know it well that setting up of ‘commissions’ is a fooling tool used by the government to confuse the issue as enquiries would be meandering through a labyrinth of irrelevant details lingering a simple and straight case through months – may be, years!

Public outrage in the capital these days is a pointer to total failure of governance.  The hollowness of promises and assurances is betrayed by the fact that our political parties have in fact extended their patronage to the rapists and criminals. Rather than fast-tracking criminal proceedings against the accused, parties are actually abetting crime by giving tickets to criminals and bringing them to the legislature as MLAs and MPs. Their newly acquired position comes handy to slow down and subvert the legal process. The latest addition is a newly elected MLA (Congress) of Himachal Pradesh gone underground after being charged for murder of a young woman in Panchkula. If more evidence is needed, here are the factual details collated by National Election Watch (NEW) and Association for Democratic Reforms (ADR):

And these are their self-declarations, not full information about much more that could be lying beneath blackmail, compromise, unregistered and unreported heaps. There are plenty in the corridors of power who, notoriously dreaded for their character, are roaming free even if the likes of ND Tiwari, Gopal Kanda, Mahipal Maderna, Abhishek Singhvi et al are discounted because reported cases of rape and molestation in India are just the tip of the iceberg. Consequentially, the government has lost the character and credibility that could inspire confidence in the masses that are surcharged with anger and strong urge for change.

India is up and angry. In modern times when political rallies are known for rampage, arson and loot, Anna had ushered in a culture of peaceful, non-violent agitation but finally he had to call it off as the government remained on a switch-off mode. Commendably, the youth power of the nation is still peaceful and very much restrained despite their justified anger. Such peaceful mass representations must be respected and heard empathetically with topmost concern. But the government seems to draw comfort form the public restraint which is a suicidal option chosen by it; for if you spurn peace, violence burst and turn into unmanageable bloodbath. Corruption, crime, anti-people government, arrogant police and civil administration – all add up to make it highly inflammable, not only in Delhi but throughout the country. It is surprising how people are restraining themselves from armed rebellion even in such anarchic times. The government will do well to see the signals and be advised not to try people’s patience.