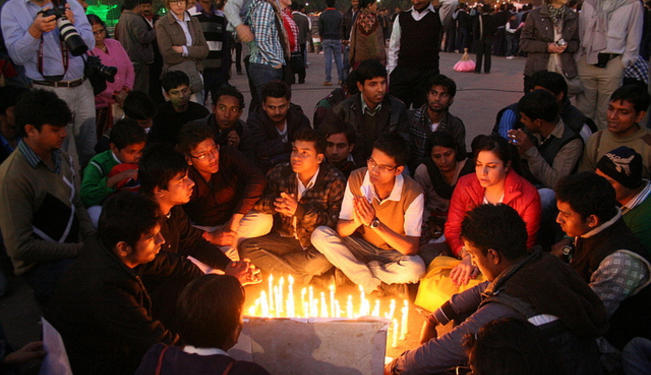 India erupts in protests against a corrupt and repressive government following the barbaric rape and death of a young medical student.

India is in turmoil.

The death of a young 23 year-old student after a barbaric gang rape has stirred the youth onto the streets of New Delhi in protest. The ham-handed response from the government, which failed to anticipate the anger of the people has exacerbated the situation.

By barricading New Delhi and through usage of disproportionate force on the protesters, the Congress led United progressive Alliance (UPA) has transformed Indian democracy into a government ‘without the people.’ In an effort to prevent India Gate from being converted into India’s Tahrir square an already tottering government has further alienated itself from people.

The policy paralysis engulfing the Manmohan Singh government as a result of the unholy diarchy between the de facto ruler Sonia Gandhi and a proxy Prime Minister has ensured that governance in the country has come to a standstill. With the political establishment either unable or unwilling to comprehend the people’s exasperation emanating from the absence of governance, a catharsis was waiting to happen.

The catharsis arrived in the form of an unorganized and leaderless protest at India Gate and other places in the country against the barbarity perpetuated on the rape victim. Prima facie the protesters were seeking exemplary punishment for the rapists. But on a subterranean level it was also an expression of disgust against a political establishment which refuses to address the concerns of the people and rules with the avaricious motive of clinging to power.

The indecisive government has repeatedly failed to comprehend the frustration of the people manifesting itself in mass gatherings in the national capital during the past year. Unable to rectify its mistake of abdicating governance, the government has resorted to chicanery to befool the public. When that has failed, it has come down with a heavy hand on the protesters. The crushing of discontent seems to indicate that autocracy is replacing democracy in India.

The repression began in June 2011, with the brutal midnight police assault on the sleeping protesters accompanying Yoga Guru Ramdev. They were peacefully protesting against the pilferage of the exchequer and the deposit of illicit money in foreign banks by influential Indians. Social activist Anna Hazare, demanding a law for accountability of politicians and bureaucrats, had captured the imagination of the dormant middle class. He was subsequently outmaneuvered and taken for a ride. In a shamelessly Machiavellian act the government went back on its word to create an anti-corruption law after convincing Anna Hazare to bring a halt to his agitation.

The ruthless police action against protesters demanding capital punishment for the rapists and for introduction of harsh laws against sexual assaults epitomizes a government at war with its own people.

Notwithstanding the public anguish against a crime which shocked the nation, the government initially vacillated over penal action against erring police officials. Calls for the removal of the apathetic and reportedly corrupt Delhi Police Commissioner were met with a stony silence.

Instead, protesting youngsters demanding stern action against the rapists were not permitted to meet the President, the Prime Minister or the Delhi Chief Minister. The meeting with Sonia Gandhi and Rahul Gandhi, the scion of the Nehru-Gandhi dynasty, was loaded with symbolism to demonstrate the actual power centre in the country. The perfunctory meeting arranged for photo-ops instead of any genuine engagement was immediately followed by high handed police action on the protesters.

Ironically, Rahul Gandhi has been projected as a youth icon by the elite English speaking Delhi media that continues to remain enamored of the Nehru-Gandhi dynasty. Rahul’s much touted youth brigade is in reality a group of effete leaders belonging to political dynasties. Members of the cosy elite grossly misjudged youth anger in India. No effort was made by this elite to establish any communication with the protesters or empathize with them. With arrogance cocooning the political elite from the sentiments of the country, their superficiality has been exposed.

The Indian Home Minister, Sushil Kumar Shinde, attempted to equate peaceful protesters with armed Maoists who oppose the existence of the Indian state. He thereby exposed the mindset of the government and further infuriated the protesters. The insecurity of government which fortifies itself behind barricades when confronted with democratic protests is clearly obvious. The ghetto mentality of an isolated leadership epitomizes a systemic failure and a collapse of governance.

The fact that the political establishment is out of sync with the people’s aspirations was emphasized by the fact that neither the UPA chairperson Sonia Gandhi nor Sheila Dixit, the Chief Minister of Delhi, exhibited any sensitivity towards the hapless girl. These leaders, who mouth platitudes for the welfare of the women, did not deem it fit to visit the hospital where the girl was battling for her life.

Sheila Dixit’s heckling by the protesters as she tried to pay homage to the girl after her death is just an expression of widespread public wrath against the political class. The political disconnect and the feudal mindset of these ‘people’s representatives’ had been revealed in the past when Sheila Dixit questioned the right of women to “remain out at 2.00 in the night” after the murder of a young lady. That the lady was returning from her work at a media channel was perhaps trivial for a leading woman politician.

Unsurprisingly, New Delhi has become the ‘rape capital’ of India with 635 reported cases in 2012.

Failing to subdue the public by brute force, Prime Minister Manmohan Singh attempted to imitate President Barack Obama’s public address after the Sandy Hook elementary school massacre. The difference in the speeches exemplified the difference between the two democracies. The insincere effort of garnering sympathy eight days after the heinous incident fell flat because of Manmohan’s lack of sincerity and a terrible faux pas. The soporific canned speech ended with an oblivious Manmohan querying the cameraman, “theek hai?” (Is it OK?)

The blooper set social media sites on fire and earned opprobrium for an already embattled Manmohan. It marked a watershed in Indian politics because Manmohan showed a complete lack of awareness of popular sentiment. Indian politicians have entrapped themselves in gilded palaces alienating themselves from voters who are only remembered during elections. Spreading protests across the country indicate rapidly increasing disillusionment with elected representatives.

The opaqueness of the government's crisis management has raised public suspicions about the intentions of the government. Its decision to secretly whisk away the battered victim to Singapore for further treatment and the secretive cremation of her dead body is reminiscent of the Stasi in East Germany. The decisions regarding the girl's treatment and cremation were political and not medical. They emanated from the apprehension of adverse public reaction after the girl’s demise. Following her death, the government forcibly secured the capital and attempted to intimidate the public through police repression. Roads leading to the Prime Minister’s residence were sealed and the armed police presence suggested that that the government was terrified of its own citizens.

It is important to note that the entire political class has adopted a laissez-faire policy towards the protection of women. This is evident from the fact that 15 years after the ‘Vishakha case,’ a landmark judgment by India's Supreme Court, the Indian political establishment has failed to enact a law against sexual harassment of women at the work place. In the ‘Vishakha case,’ the Supreme Court had issued guidelines for the protection of working women which were to be prescribed to, until the enactment of a law by the parliament. The Indian parliament has not find time to enact such a law.

Though the protesters have been vociferous about more stringent laws against sexual offenders, legislation is no panacea for all the ills in society. Laws need to be implemented, not just enacted. A pusillanimous government, which retreats behind steel barricades in a crisis, is incapable of implementing laws and protecting its citizens.

Any institution of governance cannot function in a leadership vacuum . The need of the hour during these turbulent times is for leaders who are giants. Unfortunately, India has been cursed with political pygmies.

One of these pygmies is India’s former President, Pratibha Patil's. She inexplicably pardoned five rapists and murderers who had been sentenced to death by the Supreme Court. She has been unable to explain why she exercised presidential prerogative to pardon the criminals. It exemplifies the hypocrisy of an uncaring and incompetent government that is now spouting homilies after the latest outrage.

The egregious and avaricious Indian political system is leading to disillusionment of the youth with democracy. This disillusionment is ominous for a country with a predominantly youthful demography. India needs reforms urgently if it is to preserve its democracy, which is far too valuable to even think of losing!