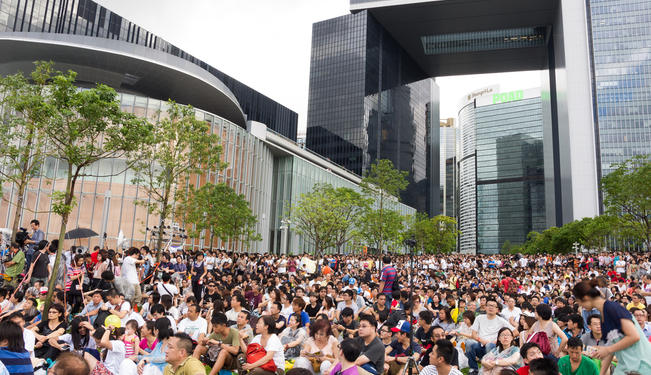 Is the outcry in Hong Kong against the Chinese government’s new curriculum for schools significant?

Summertime is Hong Kong’s typhoon season, but this year a political storm has also been brewing on the horizon. A crisis grew out of government actions in both China and Hong Kong, and stems from when Chinese officials introduced an educational program intended to manipulate Hong Kong’s youth into accepting, without question, anything the Chinese government does.

Hong Kong is heavily influenced by China, both politically and economically, ever since the British handed control of Hong Kong to China in 1997. For the upcoming 2012-2013 school year, the Hong Kong government has introduced a new subject, “Moral and National Education”, to all public primary and secondary schools in Hong Kong. Its teaching manual describes the Communist Party as an "advanced, selfless and united ruling group", while denouncing the American Democratic and Republican parties as being part of a "fierce inter-party rivalry that makes the people suffer". If they agree to incorporate this curriculum in September, the Education Bureau will provide the schools with additional resource funding. Most schools had no choice but to accept the funding and introduce the new subject.

This sudden policy change has caused immense debate among the students, teachers, parents, and the government officials. Although Hong Kong students enjoy a three-month long summer break, during this summer, students in Hong Kong found themselves learning one of their greatest lessons.

Knowing that the new subject does not benefit the people in Hong Kong and the future of Hong Kong, a committed core of students formed a group called “Scholarism”, and on July 29 led more than 90,000 people to protest the change of curriculum on the busiest streets in Hong Kong. These young scholars, along with their parents, teachers, and the general public, came together to protest at the main building of the Hong Kong government.

A month later, right before the new school year began, the student activists of Scholarism joined “Occupy Hong Kong” and began protesting outside government buildings for ten days. The student activists group organized a protest and attracted about 120,000 protesters who congregated at the headquarters of the Hong Kong government. On September 11th, 8,000 Hong Kong university students and faculty abandoned their classrooms to protest at the University Mall of the Chinese University of Hong Kong. The university students also announced that they would support primary and secondary school students with follow-up planning and protests.

Despite the protests, the Hong Kong government promised to make only small concessions. First, the government canceled the three-year initiation period: schools are no longer required to make the subject a required course within the next three years. In addition, the government agreed to remove “Affective Dimension”, one of the most contentious assessment aspects of the subject. Even with these changes, students and parents believe that what remains of the subject still contains far too much pro-Chinese propaganda. They want the subject to be completely eliminated from the curriculum in all Hong Kong schools.

Hong Kong students stood up against great odds and the unpredictable actions of the Chinese central government. It is not easy to disagree with your teachers, schools, the Hong Kong government, and especially China, one of the most powerful countries in the world. Hong Kong students used their independent thinking to “reason out” the nonsense of the policy change. These freethinkers questioned the “truths” the governments thrust upon them, and had the courage to raise their voices. Their position against the new policy change continues to gain popular support both within Hong Kong and throughout the world – media from across the globe have covered the story.

Formal education in schools is not the only way to shape one’s mind. There is more than one way to learn how to be a world citizen. The goal of education is supposed to bring people to a better understanding of themselves and the world around them. In order to do that, one has to be equipped with the skills of critical thinking.

Today, Hong Kong students have not only proved to the world that they will do what they can to defend their beliefs, but they also proved to the world they can think independently, evolve as a community, and act as global citizens. Isn’t that what education is all about? Do they really need an extra subject named “Moral and National Education”?

Before the Chinese took over Hong Kong, Chris Patten, the last Governor of British Hong Kong during a policy address speech in 1995 commented that: “My anxiety is not that this community's autonomy would be usurped by Peking, but that it could be given away bit by bit by some people in Hong Kong.” I believe there is still much hope in Hong Kong’s future because of these young minds.

Perhaps the Hong Kong government and the Chinese central government should listen to these voices and understand that Hong Kong people are not that naive; they will readily defend their right to think freely, outside of national identity. I am sure if both governments stop trying to manipulate the people of Hong Kong in this way, they will find Hong Kong citizens to be much more amenable to their influences.