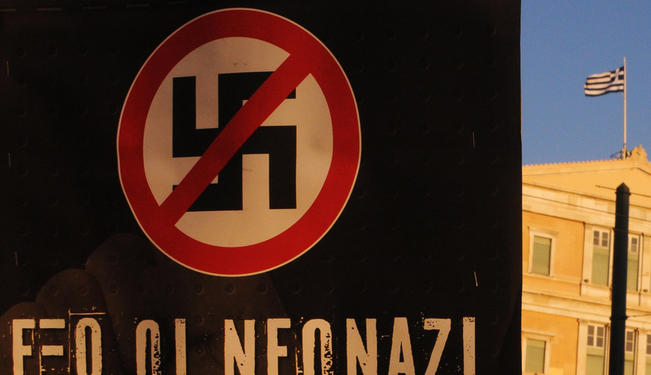 Is there a direct link between youth unemployment and the rise of the far-right in Europe?

In recent years, there has been a notable increase in the number of neo-Nazi demonstrations and groups in Europe. Many commentators suggest this rise is related to the number of unemployed people and the economic crisis in the European Union (EU). But how true is this?

According to the Danish Center for Holocaust and Genocide Studies, Neo-Nazism emerged after World War II and, as the name suggests, has its roots in "traditional" Nazism, consisting primarily of extreme nationalism, racism and xenophobia.

However, although very similar in ideology to Nazism, the neo-Nazi movement differs slightly, focusing hatred more toward foreigners and immigrants and less on anti-Semitism. That said, Jews, along with other ethnic groups and anyone who does not fit the "White Power" philosophy, are still targeted and many neo-Nazis deny the Holocaust.

Germany has one of the largest neo-Nazi parties, National-Demokratische Partei Deutschlands (NPD), created in 1964. As of 2012, a report by the German intelligence service (Verfassungsschutzbericht) stated that there are approximately 6,000 neo-Nazis living in the country.

According to German law, Nazi-related organizations, symbolism and Holocaust denial are prohibited. This raises the question as to why the NPD has yet to be banned.

So far, three attempts have been made. The first was in 2003 by the federal government, which failed due to the number of state-employed informants within the party influencing its decisions. The second attempt in 2011 suffered a similar fate for the same reasons.

The most recent attempt in 2012, despite receiving the support of all 16 German states, was derailed when, in March 2013, German Chancellor and leader of the ruling Christian Democratic Union Angela Merkel declared they would not try to ban the NPD. Merkel’s decision was politically motivated, stating that she "did not want to risk failure a second time round as that could help legitimize the NPD in the eyes of some voters."

But other reasons also played a role. By banning the NPD, it would become harder to monitor its movements as well as increase its publicity.

In the same month, the United Nations General Assembly officially adopted a resolution on the "glorification of Nazism: inadmissibility of certain practices that contribute to fuelling contemporary forms of racism, racial discrimination, xenophobia and related intolerance."

It expresses concerns about the expansion of extremist political parties and movements, such as neo-Nazi groups in several parts of the world. It also points to violent manifestations and terrorism driven by extreme nationalism, discrimination, intolerance and xenophobia.

The resolution was approved by 120 countries. Canada, the US and the Marshall Islands voted against it, while 57 nations decided to abstain from voting. Among those that abstained were all the members of the EU, which presents a curious fact since the rise of neo-Nazi movements are increasing in many of these countries.

Perhaps this can be explained by the fact that the resolution only voices concerns and reaffirms prior resolutions against racism and xenophobia, rather than implementing any practical measures to tackle it.

Another explanation is simply that the abstaining countries support freedom of expression. Neo-Nazi groups commonly use freedom of speech laws to legitimize their movement and attract attention to themselves.

More worryingly, they are also gaining momentum by recruiting younger people as members. Neo-Nazi groups, including Heimattreue Deutsche Jugend (HDJ) — translates as the "German Youth Faithful to the Homeland" — have been discovered using methods such as camp holidays, designed to instill Nazi values in young people. During these camps, children were "put through military-style drills… were taught that foreigners were 'enemies of the people'" and given courses in "racial science," which taught the need to "restore blood purity."

Other Neo-Nazi groups such as the NPD use less direct but nonetheless effective methods, often using music to disseminate their far-right values in an effort to indoctrinate a new generation of neo-Nazis. Most commonly, this is done through circulating "schoolyard CDs" to youngsters containing radical far-right hip-hop, with explicitly violent and nationalist lyrics.

Further empowerment of neo-Nazi groups in recent years can also be attributed to the increasing denial of the Holocaust among certain young people in Eastern Europe. Many agree that better education in schools is essential to reverse the trend.

As stated by Professor Michael Shafir, an expert in post-Soviet countries: "Holocaust denial in post-Communist East Central Europe is a fact." This can be related to the communist legacy of "state-organized forgetting" that was prevalent with the Soviet Union’s "de-Judaization."

However, the real question is why has support for far-right political parties risen in recent years? Can it really be related to youth unemployment and the growing influence of neo-Nazi groups?

According to Danny Dorling, an Oxford University professor of Human Geography, during the summer of 2013, an average of 26 million people were searching for employment in Europe. As stated by Dorling himself: "In 2013, those officially labeled as unemployed account for almost a quarter of all people aged under 25 across the European Union."

Overall, in the EU, the rate of youth unemployment stands at approximately 22% and, in countries affected most by the European economic crisis such as Greece and Spain,  unemployment has hit more than 50% of the youth workforce.

The rise of neo-Nazi parties in Europe has mirrored these increases in unemployment. According to Richard Evans of New Statesman, in the 2012 elections in Greece, a neo-Nazi party known as Golden Dawn unexpectedly won 21 parliamentary seats during the first election and 18 seats during the subsequent reelection and, in France, the Front National received 18% of the votes in the 2012 presidential elections.

In addition to the rise in support for far-right political parties, an increase of neo-Nazi marches has also been seen in Europe. For example, according to Tanweer Ali, a research associate at the Foreign Policy Centre in London, since last summer in the Czech Republic the rate of social exclusion, unemployment, and waves of ethnic tension between Czech extremists and the Roma population have been increasing. This has led to numerous anti-Roma protests which reached a peak on August 24, when eight different towns were experiencing protests at the same time.

Several observers, including Evans, have started to note a certain parallel between now and Europe in the 1930s that saw Adolf Hitler’s ascent to power. The increase of Nationalsozialistische Deutsche Arbeiterpartei (NSDAP) popularity in Germany was closely related to the high rate of unemployment in the 1930s. Nazis blamed the main political parties for the economic crisis and the youth were attracted by its ideas and promises of a better life – explaining why the large majority of votes in favor of the Nazi party were from first-time voters.

Such direct comparisons, whilst compelling, do not necessarily mean there is a direct link between youth unemployment and the growing popularity of neo-Nazi movements in Europe. It is hard to prove that there is any immediate correlation, simply because it is still too early to make assumptions.

The economic crisis in Europe began only six years ago in 2008, so statistics are still limited and the concurrent rise in both neo-Nazi movements and youth unemployment could be a coincidence.

However, it is undeniable that such far-right groups and parties have been on the rise in recent years. It is arguable that the discontent which arose after the financial crisis due to skyrocketing unemployment, spending cuts, and austerity measures throughout many European countries has at least in part fuelled far-right movements.

This is evidenced in far-right parties' rhetoric, blaming immigrants and foreigners for such problems, as well as some like the NPD to pursue more moderate, though still ultra-conservative, policies in an attempt to attract more discontented voters.

Most commentators agree that, regardless of any link between the increase in far-right movements and the rise in unemployment, governments must work to create more jobs by offering economic incentives to companies for hiring young people, as well as work to improve Holocaust education in schools.

Each year, many students complete their university studies and struggle to find a place in the job market. If nothing is done to help alleviate the problem, then it is entirely possible that the feeling of dissatisfaction amongst young people, seen in many protests worldwide since the advent of the economic crisis, will continue to grow. And for some, the allure of nationalism and the far-right with its simplistic answers and convenient scapegoats might be hard to resist.