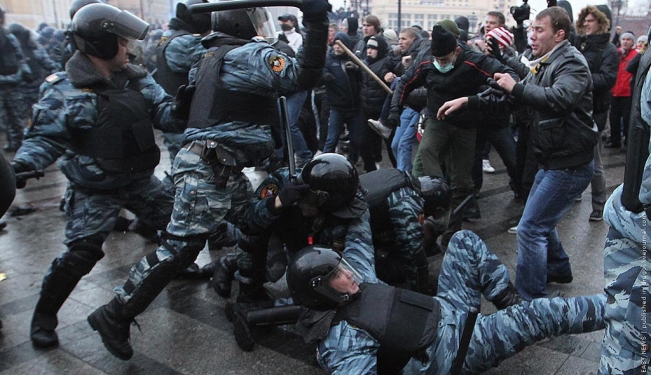 On December 11th 2010, Manezh Square was rocked by acute violence. A march in memory of Yegor Sviridov (a soccer fan who allegedly was killed during inter-ethnic violence in Moscow a few days earlier) developed into one consisting of Russian nationalists holding slogans: “Russia for Russians” and “Moscow for Muscovites”. The events on Manezh Square revealed a major, contemporary problem faced by Russia – inter-ethnic tension, which can be regarded as either Russian nationalism or a rise in xenophobia. Tension between “Russians” and “others” can be observed more closely in large cities such as Moscow and St. Petersburg, where the concentration of legal and illegal immigrants is high. Ethnic Russians feel threatened by the large numbers of incoming ‘visitors’. Moreover, non-ethnic Russians, mostly Caucasians and Asians, are blamed for all the problems of the country, whether terrorist attacks or rising crime rates.

How did an ethnically diverse country such as Russia become a battlefield between “us”, Slavic looking people, and “them”, all others, but specifically people from the Caucasus and Central Asia? What is the reason for the citizens of one country to turn against one other? How come non-Slavic looking people, in particular people from the Caucasus, are blamed for “starting all wars” (citation is taken from v kontakte social network)?

It all began in the 1990s. Shortly after the collapse of the Soviet Union, Russian society was fragmented and the hostility was not yet evident.  Furthermore, young Russian people were open to modernization and were looking forward to liberal modifications of the country including tolerance towards other ethnicities. Even when the Chechen War started in 1994, Russians had different perceptions of the situation: some blamed the Russian government for instigating the war and losing “the young sons of Russia”, while others believed that the war had its positive effects and needed to be led to an end, precisely after Wahhabists, the Islamic fundamentalists operating in the Caucasus, joined the Chechens in the aftermath of the first Chechen War. However, even at that time people’s tolerance still prevailed and conflicts involving people of different ethnicities arose only from personal misunderstandings rather than from ethnic backgrounds. The situation changed at the end of the 1990s and beginning of 2000s, when foreigners became subjects of constant attacks and prejudice.

In 1999, Vladimir Putin, who had just attained power in the Kremlin, decided to promote himself as a strong leader and to win public support in the upcoming presidential election in 2000. Due to the obvious lack of unity and patriotism among the Russian population, Putin sought to create a new unified Russian society. The second Chechen War played into his hands, as it brought not only unification of the Russians but also a change in the perception of non-Slavic looking people.

This increasingly negative perception, in particular of the Caucasians, grew even more after the nationalist Chechen movement was joined by the Islamic fundamentalists. Wahhabists who initially came to help their “Muslim brothers” in the struggle against Russian “colonizers” started calling for an establishment of the Islamic State based on the Sharia law in the North Caucasus region, rather than for the independence of Chechnya. Wahhabists, armed with material and moral support from some terrorist organizations in the Arab countries, and accompanied by a small radical group of people of Caucasian nationality rather than pure Chechen Islamic terrorists, committed terrorist attacks on the territory of Russia. Islamic fundamentalists were responsible for organizing a number of outrageous terrorist attacks, specifically hostage taking in the theater Nord-Ost on October 23rd, 2002, and in Beslan school on September 1st, 2004. In the aftermath of the terrorist attacks, Russian citizens became cautious about national identity and appearances of the people on the streets, particularly in large cities such as Moscow. It was during this period that radical Russian national groups became more dangerous and active toward, first, Caucasians, and, afterwards, Asians and Africans.

However, the change of attitude toward non-Slavic looking people was also a result of the Russian government’s anti-terrorism policy and, in particular, public rhetoric by the Russian political officials, including President Putin. The aftermath of the terrorist attacks, i.e.public fear, encouraged the Russian government to choose a pro-national policy, which ignited the current inter-ethnic conflict. For example, the ex-mayor of Moscow, Yuri Luzhkov, contributed to the support and further bolstering of negative perception of immigrants. He supported the Soviet policy of mandatory registration in Moscow, which allegedly was done in order to track terrorists. Due to Russia's inefficient bureaucracy, it was almost impossible to obtain registration legally; therefore, most of the labor immigrants became illegal. Ironically, the legal registration did not stop real criminals: the terrorists that organized the theater hostage taking in 2002 obtained a legal registration by bribing officials. Moreover, the mandatory registration and anti-terrorism policy allowed police to approach anyone on the street to check their registration and passports, which subsequently led to the increase of corruption on city streets.

Furthermore, the most important person in the country, Vladimir Putin, in his post-terrorist attack speeches, was stressing the need to protect Russian citizens from outsiders, such as “bandits” from the Caucasus. However, he did not take into consideration that once he identified a scapegoat, the Russians would start branding all Caucasus people as such. Furthermore, in 2007, Putin issued a decree banning foreigners from working in marketplaces. The goal was to strengthen the Russian population through protection of their labor market. Thus what at first started as a war against terrorism was later transformed into a war against foreigners.  Such indirect, but nonetheless obvious, support from the president of anti-foreigner laws  seemed to justify the idea of  Slavic (Russian) domination over other ethnic minorities.

Another instance of the anti-immigrant rhetoric came from the Chief Sanitary Physician/Inspector of Russia, Onishchenko, who blamed foreigners for transmitting HIV infections into Russia. On October 10th, 2009, he said: “Due to labor immigrants’ extremely limited knowledge of the methods of transmission and prevention of sexually transmitted infections and their high risk behavior, they are highly vulnerable for these infections” adding that “work migrants are significantly contributing to the spread of HIV in Russia and CIS countries” (Novosti 2009). The headline for Onishchenko’s interview was ‘Migrants contribute to the spread of HIV in Russia.’ Such a blatant anti-immigrant rhetoric contributed to creating a negative perception of foreigners among the Slavic population. Furthermore, many active political parties started using pro-Russian slogans; for example, the official slogan of the Liberal Democratic Party of Russia is “We are for poor, we are for Russians. We will defend Russians in our country”. Such artificial victimization of the Slavic Russian population creates alienation of other ethnic groups and unification of the Russians.

It is clear that this negative perception of foreigners from either outside the country or other ethnically non-Slavic regions contributes to bolstering Russian nationalism.

The Russian government, consciously or unconsciously, created a united Russian society that excluded non-Slavic people, particularly in the central part of the country. The xenophobic rhetoric by various government officials, as well as several policies instituted by the Kremlin, suggests that the terrorist attacks committed by people with non-Slavic appearance were at least partially responsible for the development of excessive nationalism. Unification of Russian society started by the government in the beginning of the 2000s backfired, as mobilized nationalistic groups demanded not only a ban on the entry of foreigners from other countries and some regions within Russia, but also the  extradition of  foreigners currently residing in Russia. However, the Russian government still does not want to admit the problem and avoids using the phrase “Russian nationalism” openly. Although the Russian government became concerned as the nationalist masses started going out of control, Russian officials try to blame leaders of the liberal parties for the unrest and disturbance on the streets as a method of opposition. Thus, the Russian government put itself in the difficult position of dealing not only with the numerous economic and social problems but also with a new, threatening trend in inter-ethnic tension.