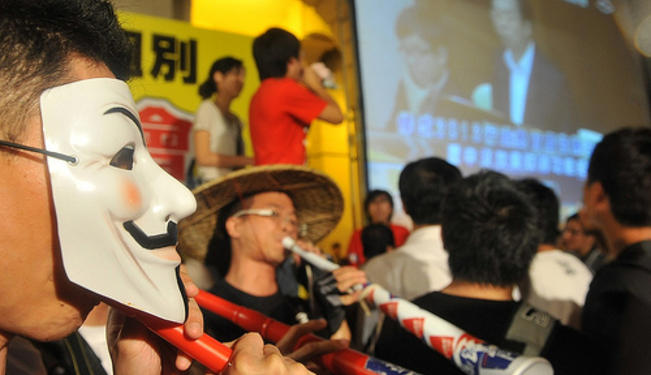 2012 should have been a year of celebration in Hong Kong as it reached the landmark 15th year after the handover from Great Britain in the summer of 1997. However, recent events in the territory helped remind everyone how much China and Hong Kong remain divided.

To begin with, barely a week after the New Year celebration, a Beijing professor went on a talk show and called the people of Hong Kong “bastards” and “the running dogs of the British.” It was a shocking and vicious attack coming from one who claims ancestry from Confucius, who of course wrote the book on the correct form of etiquette and manners “Li Chi.” But what we saw here was more than bad manners. Professor Kong Qingdong (who once walked with Tiananmen Demonstration leader Wang Dan in 1989) said that since the Hong Kong people do not speak Mandarin (the official Chinese dialect), they should be called bastards. As expected, Hong Kong people staged and lodged angry protests, and the professor had to backtrack on his comments.

This event illustrates that even after 15 years of Chinese governance in Hong Kong, there are still issues between the Mainland and the Special Administration Zone. While Hong Kong continues to compete and identify itself globally, some in the Mainland feel that it did not change enough socially to fit in with the rest of China. With the concept of “one country, two systems” guaranteed under the basic law for 50 years, the people in Hong Kong naturally did not feel the need to radically switch into a system that is still in its developmental stage. Even though business with China has long been a reality that no one in Asia could ignore, it comes with some heavy baggage. Corruption, bureaucracy and disregard for international law (mostly in the realm of protection of intellectual property) are issues that the Mainland Government must deal with as economic growth roars ahead. It is due to this that the long overdue reforms must be slow and cautious. That is the real reason why Hong Kong continues to rely on its international ties and seeks to reconfirm to the world that their standards will not slip. In that Hong Kong is rewarded as “the best place to do business” or “the freest place”. However, that does not mean that Hong Kong people are not patriotic; in fact it is the opposite. The handover has given the people of Hong Kong a national identity and the opportunity to help China to play an active role in the coming years.

In summing up the love/hate relationship between the two, one should give a hand of applause to the late premier Deng Xioping. This French-educated architect of the “One Country Two Systems” clearly foresaw the future bumps and glitches that could result in the intervening years between the two systems. Therefore the 50 years of no change in Hong Kong calms fears as well as gives time for China to catch up to the western or international standard of governance. It is a bold experiment that continues to surprise critics that China may yet make this work.