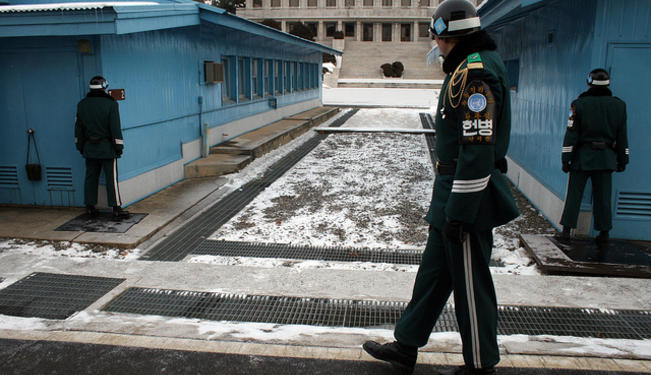 South Korea faces various challenges deriving from its northern neighbor as well as regional and international issues.In the upcoming election the candidates need to map out clear visions of inter-Korean and foreign relations.

On 19 December, South Koreans will be casting their votes to determine the country’s new president. Once in every five-year period, South Koreans elect their head of state and government. Besides the country’s domestic socio-economic issues, South Korea’s foreign and North Korea policies will influence the outcome of the election decisively.

Without a doubt, the two Koreas’ bilateral relation has reached its nadir in the aftermath of the North Korea’s military provocations in 2010. North Korea’s new leader, Kim Jung-un, has not shown his interest on engaging South Korea. However, at the same time, the younger Kim and his regime will surely be unable to resist the temptation of influencing South Korea’s presidential election for the regime’s benefits. Pyongyang’s plan to launch another Unha-3 rocket with a polar-orbiting earth observation satellite, for instance, is viewed as an attempt to manipulate Seoul’s internal politics.

South Korea’s conservatives always dislike the idea of North Korea, manipulating South Korea’s domestic politics. The current administration of President Lee Myung-bak for that reason publicly warned North Korea, not to meddle with the upcoming presidential election. At this moment, considering the long history of Pyongyang’s troubled relationship with the South’s conservatives, Pyongyang evidently distrusts the ruling conservative Saenuri Party and its presidential candidate, Park Geun-Hye. However, Ms. Park signals her openness for any future engagement with the Pyongyang regime as long as Pyongyang fulfills its guarantee on the denuclearization process.

Needless to say, it is a surprising policy move of Park, considering her ideological stance in South Korea’s political spectrum. South Korea’s engagement policy toward North Korea has been off the table under President Lee. Unfortunately, the Lee administration has completely been incapacitated in dealing with its counterpart in Pyongyang while Beijing has gained more diplomatic and economic leverage over North Korea. As long as Beijing remains Pyongyang’s economic and diplomatic benefactor, the regime in Pyongyang may not feel an urgency to reverse its deteriorated bilateral relationship with Seoul in case Park is elected as president. It remains to be seen at the moment that how effectively enough Park (Moon as well) will strategize and solve this conundrum.

In terms of South Korea’s foreign policy outlook Park will have no intention to impair the ROK-US bilateral relations. As Lee has done in his presidency, Park will more likely be emphasizing the importance of the ROK-US bilateral relations as the backbone of South Korea’s national security. In case Park wins the election on 19 December, the United States will be her first overseas visit as either president-elect or president of South Korea. On contrary, if Moon is elected, he may push for a less dependent South Korea that can pursue its own geostrategic and foreign policy interests. Of course, he unquestionably recognizes the benefit of the U.S. security umbrella for South Korea. However, Moon will be under pressure to pursue a more autonomous foreign policy from his politically liberal supporters.

Dealing with a reemerged China, both candidates may consider the Middle Kingdom as a constructive diplomatic broker in inter-Korean relations. Since these two candidates’ pledge to engage North Korea, South Korea will need China more than ever to restart the bilateral engagements and denuclearization talks (also known as the Six-Party Talk). There are some South Koreans who often question the geostrategic intent of China over North Korea and inter-Korean relations. In practice South Korea and the concerned major powers need China to play a constructive role in dealing with North Korea.

Regarding ROK-Japan relations, both candidates will never undermine the importance of South Korea’s bilateral relations with Japan in principle. South Korea has generally maintained a notion that the bilateral relationship with Japan should be future-oriented with mutual benefits for both countries. However, the recent events (President Lee’s visit to Dokdo Island and the reemergence of the ultra-conservatives in Japan) have only exacerbated the bilateral relationship. On top of this trend, there are a strong anti-Japan sentiments in South Korea, distrusting Japan and its attempt to minimize its war crimes and territorial dispute over Dokdo Island. Thus, either of them will be very watchful in their engagement toward Japan even if both of them understand the importance of the ROK-Japan relations.

A Tough Journey Ahead?

Being a president in South Korea is a tough job to be carried out. As a country facing an eminent and imminent security threat, a South Korean president must keep his or her focus on North Korea all the time. Simultaneously, a president has to consider the tumultuous geopolitical nature of Northeast Asia. To carry out this complex jobit is essential to strategize and come up with their North Korea and foreign policies even before the election.