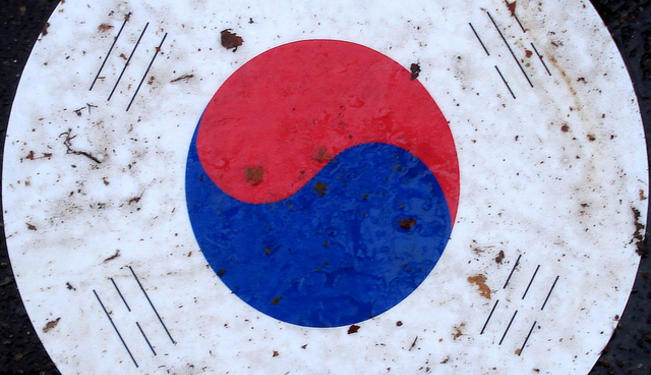 Political turmoil escalates as South Korea's third and independent runner announced resignation in the midst of discussing unifying with the runner from opposing party.

"I'm giving up my presidential candidacy…From now on, Moon Jae-in is the single liberal candidate." Ahn Cheol-Soo, independent runner for South Korea's presidential election scheduled on mid-December, made a surprise announcement on 23 November.

Ahn's hurriedly-scheduled press conference right before the candidate registration, which lasted for less than five minutes, drove his supporters and camp officials (frequently dubbed "fans") into utter shock — some crying, some in disbelief and some disappointed.

It's difficult to tell how the ruling New Frontier Party (NFP) and opposition Democratic United Party (DUP) felt on Ahn's decision, but at least on the surface, the ruling party slammed the opposition for "driving Ahn to the cliff," while DUP humbly accepted they would do their best to win the election, "as Ahn wished".

But secretly, they might have put smirks on their faces. To NFP, headed by former President Park Chung-Hee's daughter Park Geun-Hye, this could be the opportunity to take away the votes. To DUP, headed by former chief-of-staff Moon Jae-In, their runner became the "legitimate" candidate. Whether any one of the three intended or not, Ahn has no doubt become the biggest issue in the election, and he became much more important than his 25% supporters' caliber.

With the two candidates fighting for the presidency, one question remains – How will Ahn's resignation work in determining the winner and the loser?

Unlike the US that allows double-term presidency, South Korean presidents have five-year single-term post. Because there is no second chance, by the end of the term, all the parties go through several "reshuffle", most times, to sever the ties with the then administration. Ultimately, the parties try to gain new images to win the publics' recognition as the party fresh and fit for the next term. Members of the party create, reform and leave for new nest frequently.

Because politicians often change, or even to the extreme leave their parties, although there are two political giants (NFP and DUP), third party or individual emerges before the election. This third runner cannot be ignored in presidential elections because they often hold significant amount of support. A third runner is always important and – under some circumstances – supporters of the third runner become the casting For 2002 election, former President Roh Moo-Hyun unified with famous businessman and former FIFA Vice President Chung Mong-Joon (Chung withdrew his support for Roh the day before the election). Dating further back, for 1997 election, former President Kim Dae-Jung unified with Kim Jong-Pil. In 1987, Kim Young-Sam tried to unify with Kim Dae-Jung, but eventually failed. Failure in 1987 led to two Kims losing against then-winner and former President Roh Tae-Woo. Unifying the candidates even after they had been shortlisted from their parties had usually been recognized as the ultimate way to gather the votes. This time, the two trying to unify were Ahn and Moon.

Ahn, a software mogul, rose as the new rookie star during the election with significant amount of support from the people who sought reform and change in the current politics. The supporters were mainly younger generations in 20s and 30s. Although without a party, Ahn was considered to be a strong rival against Park and Moon. Even though Ahn and Moon made somewhat different pledges, the biggest similarity the two shared — that they both wanted president outside of the current ruling party — brought them to the negotiating table to unify the candidacy. From the beginning, they both repeatedly said only one of them will become the official candidate. Considering Park had stable opinion poll ratings around 40% and the other two over the NFP candidate when combined together, unifying was the best option.

But there was no guarantee that every single one of the supporters of both Moon and Ahn would concede to the result and give full support to the winner. Surely, there was widespread belief that supporters (who are desperate for changes and reform) will accept the result and eventually gather votes to defeat Park, but majority does not mean equal "every single" votes.

That's why Ahn and Moon had been so keen on reaching for the "beautiful" consensus, the one without disaccord, so that supporters of the loser would be willing to throw a vote for the winner in the election.

Then, a week later, as Ahn suspended the dialogue citing difference in the approaches to the unifying methods, Park's support grew by 1.8% to 43.3% and Moon (who was reflected to the public as the victim) also saw 0.6% increase to 25.9%, beating Ahn for the first time in four months. Ahn, losing over 2.4% to 24.2%, had gone down to third place.

What's notable in the latest figure is how fast Park recovered from the "Ahn shock". Right after the day the two candidates' poll differences widened as much as 6.1%, Park regained 1.9%, closing the gap to 1.8%. As of November 30, only a week after Moon had gained first place, the situation had been reversed, Park's rating recording as high as 47.4%, and Moon lagging behind with 42.8%.

Unlike DUP's speculation, quite a large chunk of Ahn supporters had moved to Park. Research by Joongang Ilbo, Seoul Broadcasting System and EAI showed 64% majority of Ahn's supporter had moved to Moon, while 14.9% moved to Park. 18.7% remained without supporting specific candidate. Another research company Korea Gallup said only 32% of Moon's supporters viewed Ahn's resignation as "failure to unify", while 59% from Ahn and 77% from Park marked the result as failure.

It's the sentiment. People, before the resignation, viewed Ahn as the bully trying to overturn the table to his favor and Moon as the victim. But after the resignation, they began empathizing Ahn for the pressure and stress he would've gotten from Moon's party. People's emotion takes a good part in presidential election, and Ahn's decision had turned it upside down.

The resignation does not necessarily mean loss for Moon or victory for Park. There still are plenty factors to determine who gets to take the crown and who gets to leave the scene. But numbers indicate the situation is somewhat complicated now. The event gave Moon roughly 17% boost, but at the same time, also gave Park a significant 5.9% bump. More than half of Ahn's supporters think the unification had ended in a bitter failure. Even more of Park's followers think so. The plan for Moon and Ahn to each contribute "one" to equate "two" is now going through a rough patch rising from disagreement. Some say there still is time for other variables to fluctuate the polls, but with the election only 19 days ahead, this particular rough patch is causing too much of a disturbance in Moon's campaign to catch up the lagging 6.1%.

There is no doubt unifying was the best Moon and Ahn could do, but what seemed like a good idea, is now causing some backlashes that was not counted for. The best scenario would have been for the two to make a dramatic candidate unification right before the candidate registration due date to maximize the emotional appeal to the supporters. Or, they could have united much earlier, when Moon hadn't been chosen as the runner for DUP. Or, both of them could have just agreed at just roughly a "right time" to decide how to determine the final candidate. All the above would've worked better in increasing the chance for any one of the two to defeat Park. Fortunate or unfortunate, all these possibilities didn't happen, and Ahn's ship sunk.

Despite Ahn's subtle support for Moon, now it's much more difficult for the DUP candidate because, while majority will get onboard Moon's ship and some on Park's, there are almost one fifth of the crews who will simply refuse to leave the ship. Ahn could support Moon, saying "Moon's the right choice," but there is suspicion on whether the supporters will believe Ahn's persuasion, especially when they are disappointed with the outcome of the political tug-of-war between Ahn and Moon.

Both Moon and Park might be able to bring the remainders to their side. Now the remainders are the casting vote for this election. If they decide to go with Park, the situation will get more difficult for Moon. But it will be more difficult for Moon to bring them to his side because, as the numbers tell, if many of Ahn supporters think unifying process was a failure, then there's no point for them to do the good for a "non-partner".

The election is nearby. Time has come to make the decision for who will lead the country in the next five years. How the Park-Moon-Ahn drama will end won't be clear until the ballot boxes open on December 19. But there is one thing certain at the moment. This election is a good example that proves in math, one plus one always equals two, but in politics, calculations are many times defied.