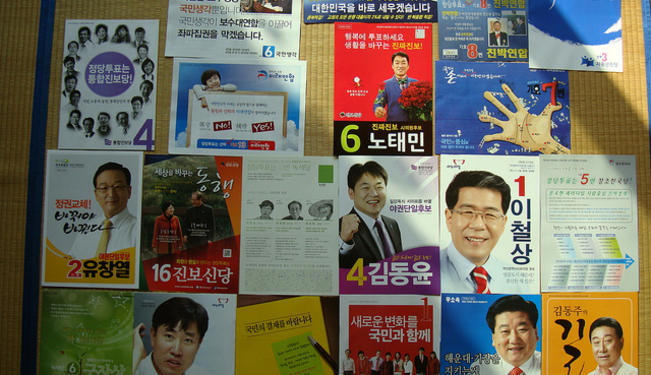 The South Korean presidential election is taking place on December 19. Since the independent candidate Ahn Cheol-soo entered the electoral campaign, the power constellations have changed.

After months of speculation, on September 19, Ahn Cheol-soo entered the race as an independent candidate to become South Korea’s next president.  The current president, Lee Myung-bak will be ending his five-year term and by constitutional mandate, is not allowed to run for a second term, a good thing for him since polls show his current approval rating at a paltry 29.7 percent.  His party, the conservative Saenuri Party (New Frontier Party) nominated Park Geun-hye as its standard bearer.  She is the daughter of former general and president Park Chung-hee who lead a coup in 1961 cutting short efforts to establish democratic government in South Korea.  Because of Lee’s low approval rating, Park has been running a campaign that keeps its distance from his administration.  She has called for increased effort to grow the economy for all and has pledged to fight corruption.  The liberal (progressive in South Korean political discourse) party candidate in the race is Moon Jae-in of the Democratic United Party (DUP), a human rights lawyer and former chief of staff for the late President Roh Moo-hyun.  Moon has campaigned on an agenda that calls for political reform, economic growth and opportunity, and reducing the power and influence of the chaebols, South Korea’s large, multinational business conglomerates.  Ahn’s entry in the election that is set for December 19, 2012 has now made this a three-way race.

Ahn is a fascinating wild card in the election.  He is a 50-year old medical doctor who left his practice in 1995 to start an anti-virus software company, AhnLab, that made millions.  Ahn retired in 2005 and in 2011 gave away close to $200 million of the wealth he gained from the company to charity.  In June 2011, he became Dean of the Graduate School of Convergence Science and Technology at his alma mater, Seoul National University.  His platform includes substantial political and economic reform along with expanded government help for those struggling financially.  All three candidates are exerting great effort to appeal to the youth vote, an important segment of the South Korean voting population and one that has been particularly hard hit by the global economic downturn.

A recent poll by the Asan Institute in Seoul indicates that in a head-to-head race with Ahn, Park Geun-hye would lose but would defeat Moon.  However, in a three-way race, Park would win with 39.1 percent of the vote compared to Ahn at 25.2 percent and Moon at 20.9 percent and 11.1 percent undecided.  Thus, Ahn and Moon would effectively split the progressive vote leaving Park the victor.

These results are reminiscent of South Korea’s 1987 election, the first as the country made its transition to democracy from years of authoritarian rule.  In that election, the ruling conservative party nominated Roh Tae-woo to serve as its standard bearer.  Roh, a former general, was a close friend and Korean Military Academy classmate of former general and outgoing president Chun Doo-hwan who led the 1979-80 coup to seize power.

The opposition had two candidates, Kim Dae-jung and Kim Young-sam.  Both had long struggled against the previous military governments but they were also rivals.  To defeat the government candidate, one would have to step aside and unite behind the other.  The two Kims were unable to reach an accommodation and split the opposition vote.  Roh Tae-woo received 36.5 percent compared to Kim Young-sam at 28 percent and Kim Dae-jung at 27 percent.  A united opposition ticket would have easily taken the election.  Many South Koreans were disenchanted with the results; despite its first step in a return to democracy, the leadership was viewed by many as a continuation of the authoritarian past, and the opposition was disappointed that the two Kims could not set their egos aside and run a combined ticket.

To avoid a repeat of the 1987 election that splits the progressive vote, Moon and Ahn will need to figure out a way they might work together.  There has been some discussion of Moon and Ahn joining under a combined DUP ticket, and they have pledged to work toward that end, but a final arrangement remains uncertain.  For Ahn to be a successful president, he will need to have a political party; governing without a base of party support will be very difficult.  Moon, as the opposition candidate, would have a difficult time stepping down and allowing Ahn to have the DUP nomination.  It is also possible for the two candidates to form their own party.  Somehow, Moon and Ahn will have to join forces in a way that keeps Moon at the top of DUP ticket but provides Ahn with a high profile role that will draw his supporters in under a united banner.  Indeed, there are reports of both candidates floating plans to shift the power structure to one where the president and prime minister have more of a power sharing arrangement in the South Korean system.  These will be difficult arrangements to make in the time remaining before the December election but one thing appears clear – a three candidate race is likely to mean a Park Geun-hye victory.

The views expressed here are the author’s alone and do not represent those of the U.S. Government, the Department of Defense, the Navy or Fair Observer.