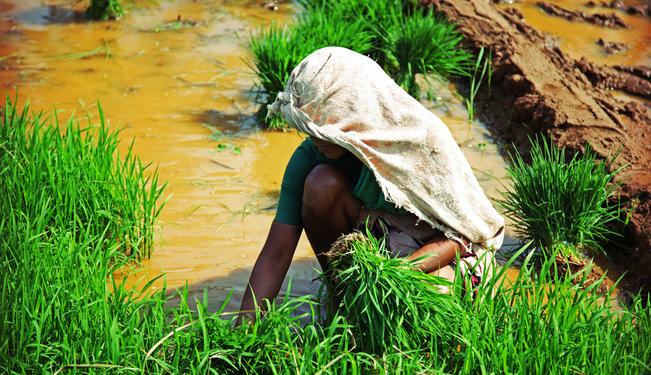 Every inch of land in India can grow food through community and kitchen gardens.

Food Security rests on a system, not on “schemes.” “Scheming” is a nasty word, anyway. And the fact that the most vital parts of our lives are being reduced to government “schemes” is a major problem. There is no vision, no systemic understanding of linkages between different parts of the food system, and no analysis of why, today, as a result of two decades of economic reforms and the globalization of our food system, every fourth Indian is hungry, every third Indian woman is malnourished, and every second Indian child is stunted.

When one builds a house, one first builds a strong foundation. In the case of food security, the foundation is the ecological foundation of food production: healthy soils, diverse, resilient, and renewable seeds, and adequate water. Without conservation and rejuvenation of the ecological foundations of agriculture, there can be no food security. And the Food Security Ordinance does not address the ecological foundations of food security at all. It does not address the fact that our most fertile food growing lands are being grabbed by the Indian government to hand over to builders to be buried under concrete, or to corrupt corporations to be spoiled by mining, or industry, only to be poisoned and polluted. Land grab is a major threat to food security.The government is promoting land grab, which is, in effect, a policy that is increasing food insecurity.

The pillars and support walls that uphold the architecture of food security are our hard working, productive annadatas, our small and marginal farmers. The reform policies of the last two decades have broken the backs of our farmers, and hence of our national food security system. Twenty eight thousand Indian farmers have committed suicide since globalization was imposed on India by the WTO, and global seed and biotechnology giants were given a free hand to lock Indian seed companies into licensing arrangements and exploit Indian farmers. Farmers are being trapped in high debt due to costly non renewable seeds, and chemicals.

Today, there are 15 million farmers less than there were in 1991, when reforms began. Every day we are losing 2,000 farmers.

The deliberate annihilation of India’s small farmers is the end of national food security.

The food security ordinance does not contain even one line on securing the livelihoods, production, and incomes of our small farmers. A law that bypasses India’s small farmers is a recipe for food insecurity and political instability.

Distribution comes after production, and is the roof. The ordinance is thus an attempt to put up a roof without securing the foundations and the support walls. The roof will clearly not hold. And the grand scheme of the biggest feeding program for the poor in the world is condemned to fail if the government does not answer this simple question: Where will the food come from?

The reason the Indian government has not addressed production and procurement in the food security ordinance, is because these are the sectors the government wants to hand over to giant agribusiness corporations through other “reform” policies.

That is why the ordinance must be read with other policies — such as FDI in retail, changes in the APMC Acts, seed policies, the Biotechnology Regulatory Act, etc — that impact the livelihoods of farmers and the right to food. Food sovereignty begins with farmers’ seed sovereignty, and food insecurity begins with seed insecurity. The government is sowing the seeds of food insecurity by buying non-renewable hybrid seed from MNC’s at high costs and distributing them to farmers at subsidized rates. The corporations make a big profit and in one season, the farmers are trapped into seed dependency because hybrid seeds do not breed true and have to be bought every year. The ordinance must be read with food processing policies which subsidize corporations and make junk food cheap. It must be read with the US India Knowledge Initiate in Agriculture, which the Indian prime minister signed with President Bush in 2005, and which was a commitment to hand over seed to Monsanto, production and distribution of food to US agribusiness, and retail to Walmart. All the policy changes we have witnessed since then flow from that agreement.

Land reform, production, and procurement were at the heart of our food security and food sovereignty policy since independence.

The universal public distribution system (PDS) was central to it, and it performed multiple roles. First, it integrated India, with rich and poor buying rations at the same ration shop. Second, it helped regulate prices, and prevented the phenomena of steep price rise we see today.

In the 1991 reforms, the World Bank imposed conditionalities to dismantle the universal PDS on grounds that too much was being spent by the government, and that the middle class was being over-sudsidized. A targeted PDS was created. The universal PDS cost Rs 2,500 crore. The targeted TPDS is costing Rs 50,000 crore. We are spending more to starve our people and create a food apartheid.

To break the food system further, the government will now spend approximately Rs 150,000 crore through the proposed Food Security Ordinance.

Most commentators have pointed out that the ordinance is political and has been introduced to garner votes in the next elections. That is why parliament has been bypassed, and the ordinance has been rushed through.

This is also an economic ordinance, and is part of the so-called “reform” process, designed to break our food sovereignty, and to facilitate the corporate highjack of India’s food system. Just as fertilizer subsidies do not go to farmers but to the industry, the subsidy in the Food Security ordinance will become a subsidy to agribusiness.

First, a food system based on monopoly, corporate control, greed, and speculation will lead to a further uncontrollable rise in food prices. Since the government makes no commitment to buying from Indian farmers, it will buy from corporations. The combination of rising food prices in the market, and cheap food to the “targeted” population can only be achieved through an ever increasing transfer of our tax money to maintain the super profits of agribusiness. This corporate subsidy that is built into the ordinance is kept hidden. What is talked about is the “cash transfer” to the poor through “Aadhar”. Offering Rs 3 for rice and Rs 2 through cash transfer for wheat when the retail price is Rs 40 and Rs 20 respectively, means that the poor are expected to spend Rs 37 for rice and Rs 18 for wheat from their pocket. Since they do not have that money, the consequence will be mass starvation.

Further, tucked into the footnotes of Schedule II of the ordinance are conditionalities which make it evident that the government will use the ordinance to feed the vulnerable with subsidized industrial foods, fortified using chemicals or genetic engineering. This can be a market capture of Rs 100,000 crore. This is where iron fortified GMO bananas and Vit A enriched GMO golden rice fit into the future of food as envisioned by the corporates and the government.

We have another vision for India where no child is hungry and no farmer commits suicide. In the Organic India Vision 2020 prepared by organic farmers at Vasundhara, the national gathering of ecological farmers on World Food Day 2012, we can halve the costs of cultivation through ecological agriculture which frees the farmer from costly seeds and chemicals, while doubling the nutritional output per acre. Every inch of land in India can grow food through community and kitchen gardens.

We do not have to be a land of mass starvation and mass suicides. We can grow food for all.

We invite every Indian to start a Garden of Hope, where we not only cultivate safe, healthy, nutritious GMO free food, but we also cultivate hope for a hunger free, suicide free, India.